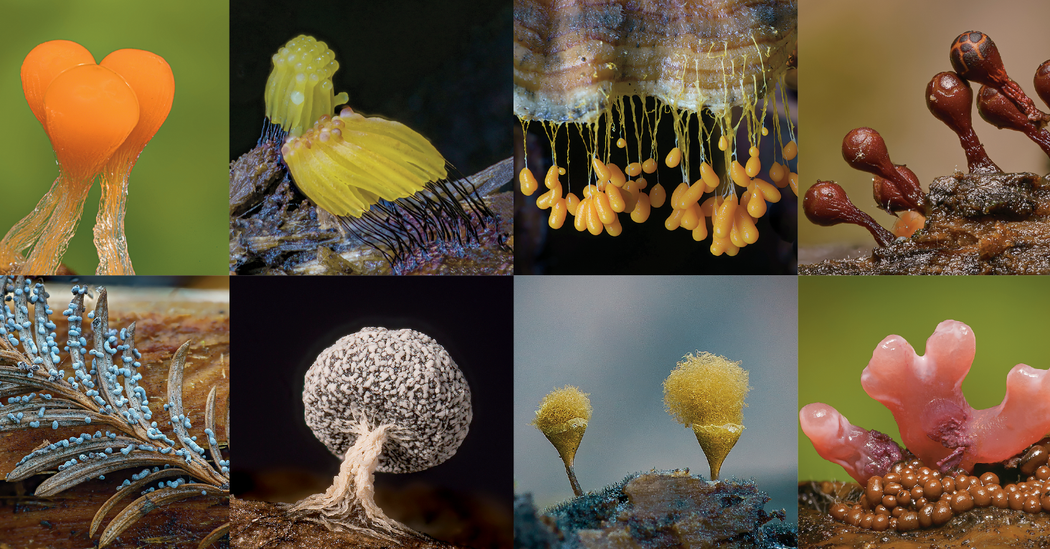 They say everybody needs a hobby, and for the past six months, mine has been taking videos and photographs of slime molds in the oak and redwood forests near my home in California. Perhaps we’ve met somewhere on the trail? I was the guy on the ground with a lens clipped to his iPhone, the patient wife, the children asking worriedly from a distance whether a plant was poison oak. Perhaps you may have recognized my “slime-molding outfit”: the frayed Y2K jacket and Old Navy cargo pants caked with mud of many vintages. Perhaps, if you dared ask what I was doing, I popped up and (in those days when strangers stood close to one another) showed you my pictures.

I must have heard of slime molds at some point before the rabbit hole opened violently beneath me last December. For a tiny organism that doesn’t kill people, it hits the news with some regularity. Since making national headlines almost 50 years ago as a “mysterious, encompassing ooze” in a Texas backyard, slime molds have recurrently earned their 15 minutes for such improbable feats as recreating a map of the Tokyo subway system and modeling the distribution of dark matter in the universe.

What sent me into the woods that month was not the creeping blobs of horror movies but rather a photo of iridescent purple Lamproderma posted to the citizen-science project iNaturalist. It was unlike anything I’d seen: Imagine ranks of glass-head pins in the belly of a leaf, and now imagine that those pinheads were made of frosted amethyst. This, I would learn, was the sporangial form of a slime mold. The pulsating blobs of Texas-backyard mystery are plasmodia — multinucleate masses that course the forest until conditions are just right for them to form the colorful fruiting bodies full of spores.

My fascination — immediate, convulsive — came not only from the beauty but also from my realization that such beauty had surrounded me during decades of wandering these woods, without my ever having noticed it. In my defense, slime molds make no appearance in my parents’ old Audubon guides, and the sole image in my mille-feuille college biology textbook is a blurry yellow smear. The only literary slime molds I know of are meditations in the notebooks of Octavia Butler and a telepathic invention of Philip K. Dick.

Still, enough excuses: I’d walked right past them. Past the bursts of carnival-candy slime mold, the salmon pearls of wolf’s milk, the tussled sheaves of chocolate tube slimes. My new awareness was nothing less than transportive. I was a sudden convert, an acolyte of leaf duff and rotting logs. Children were dispatched in tense reconnaissance — being of keen eyesight and closer to the ground, they make fine scouts. Part of the joy, we learned, was returning to a spot to track a discovery, such as a dog-vomit slime mold we encountered wandering in the redwoods, a dead ringer for a brand-new kitchen sponge. A crawling sponge, for we returned a few days later to find that it had journeyed on.

At times, we have followed a slime mold’s movements as one might a favorite team. Early in our adventures, my youngest son spotted a swath of gold so bright I thought it might be an abandoned signpost; closer inspection revealed a Badhamia plasmodium marching down a rotting log (like most slime molds, Badhamia, by virtue of obscurity, has no common name). Racing back the next day, we found that, having reached the south pole of the log, it had reversed course and was moving northward at such velocity that we could see it moving with the time-lapse function on my iPhone. The following week it began its apotheosis. The gold was gone; now bunches of grapelike sporangia glittered. A week later, they began to rupture, spilling twilight-colored spores. Two weeks later, only hollowed orbs remained, crystalline and breath-shivered. By then I had discovered a group of people posting their discoveries on Instagram with the hashtag #slimemoldsunday: intergalactic gem collections from the forests of Tasmania, Southern California and Prospect Park.

This was early March. As with any love, the seeds of loss were also planted. These are the very forests that have been burning with increasing violence each year; when the woods go, these worlds go with them. Then: Covid-19 and the progressive closing of the parks. And then: 3,000 miles away, in another woods, Christian Cooper walked into the Ramble to look for birds.

Before the shelter-in-place, my favorite spot was a rotting log at the intersection of a pair of trails used heavily by runners who barely registered me in the trailside gully with my cellphone. The past weeks have made increasingly clear that not everyone is granted such peaceful indifference. As Melody Cooper wrote movingly about her brother in an Op-Ed for The New York Times, even sneaking through the trees “to catch a glimpse of a beautiful warbler” carries a risk for a nature lover who is black.

It has been heartening, during these painful days, to see the environmental movement stand behind Black Lives Matter and other movements for social reform, to further recognize that environmentalism and racial justice can’t be unlinked. My hope is that this new awakening will be durable, matched by a greater equality in open spaces — a freedom to rustle through the leaf-litter and peer into the damp of fallen logs.

Jane Walentas, Who Planted a Carousel in Dumbo, Dies at 76

No extension of lockdown in Bengaluru after July 22, says BBMP Commissioner

After Months of Debate, England Requires Face Masks for Shoppers