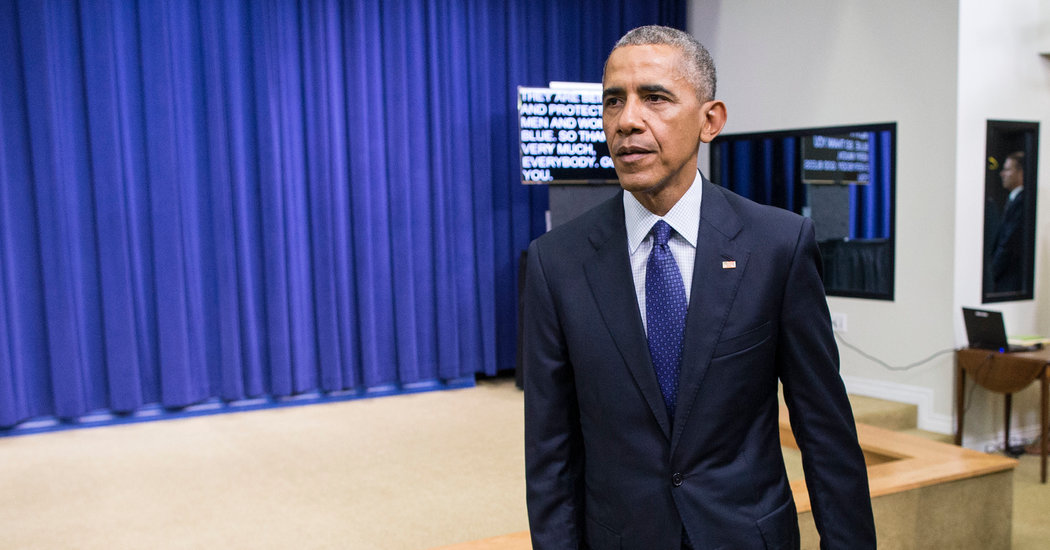 As President Trump signed an executive order on Tuesday encouraging changes to policing, he falsely accused his predecessor, President Barack Obama, of choosing not to tackle the issue. Here’s a fact-check.

“President Obama and Vice President Biden never even tried to fix this during their eight-year period. The reason they didn’t try is because they had no idea how to do it. And it is a complex situation.”

False. The Obama administration tried to address police misconduct in numerous ways, and some of those efforts have been reversed or limited by the Trump administration.

After a white police officer fatally shot Michael Brown, a black teenager, in 2014 in Ferguson, Mo., Mr. Obama convened a policing task force that produced what Mr. Friedman called “one of the most far-reaching examinations since the 1960s” and a long list of recommendations.

The Trump campaign called the task force “a clear failure” and noted that very few police departments had signed on to join its reform initiative.

Most of the changes that Mr. Trump’s executive order outlines — except the provision that offers more resources for social workers and other mental health professionals — are “not that dramatically different” from the Obama task force’s recommendations, said Alex S. Vitale, who wrote the book “The End of Policing” and who has argued that the recommendations of the previous administration did not sufficiently address the root causes of police misconduct.

“The language that Trump used during his announcement sounded exactly like the language in the Obama report,” Mr. Vitale said.

In 2015, Mr. Obama issued an executive order that placed limits on the Pentagon’s so-called 1033 program, which has sent excess military equipment to the police since the 1990s. It prohibited local police departments from obtaining track armored vehicles, weaponized aircraft grenade launchers and bayonets, at the recommendation of the task force.

Months after Mr. Trump took office, he rescinded those restrictions — keeping a promise he made to the Fraternal Order of Police, the country’s largest police union, during the 2016 election.

“He and his staff are very familiar with our efforts because the F.O.P. lobbied them to limit the work we were doing,” said Roy L. Austin Jr., who was deputy assistant attorney general for the Justice Department’s Civil Rights Division during the Obama administration. “The task force could not have produced a more powerful document in changing policing around the country. Immediately upon President Trump taking office, he made it clear he was eliminating those reforms.”

The Justice Department under Mr. Obama also opened 25 investigations into whether police departments were engaging in a “pattern or practice” of misconduct (an authority granted to the attorney general by the 1994 crime bill). It enforced 14 consent decrees, which are court-approved agreements to overhaul police departments, including in Ferguson.

In comparison, the Justice Department under Mr. Trump has been far less active. So far, it has opened one investigation and signed two agreements, which were based on an investigation opened in 2015, while Mr. Obama was president. (Whether consent decrees are effective is another matter.)

In 2017, the Justice Department significantly scaled back the program over the objections of some Republican lawmakers.

Echoing the frustrations of many activists, Mr. Vitale said that the previous administration’s overhaul efforts had not produced significant results, but he added: “I don’t think Trump has done more. I just don’t think it’s that different.”

Mr. Obama himself in 2016 acknowledged that “change has been too slow and we have to have a greater sense of urgency about this.”

Curious about the accuracy of a claim? Email factcheck@nytimes.com.

20 Republican ex-federal prosecutors call Trump ‘a threat to the rule of law’ and...

What Donald Trump Can Learn From Boris Johnson

Cuomo Cracks Down on Outdoor Drinking at New York Bars