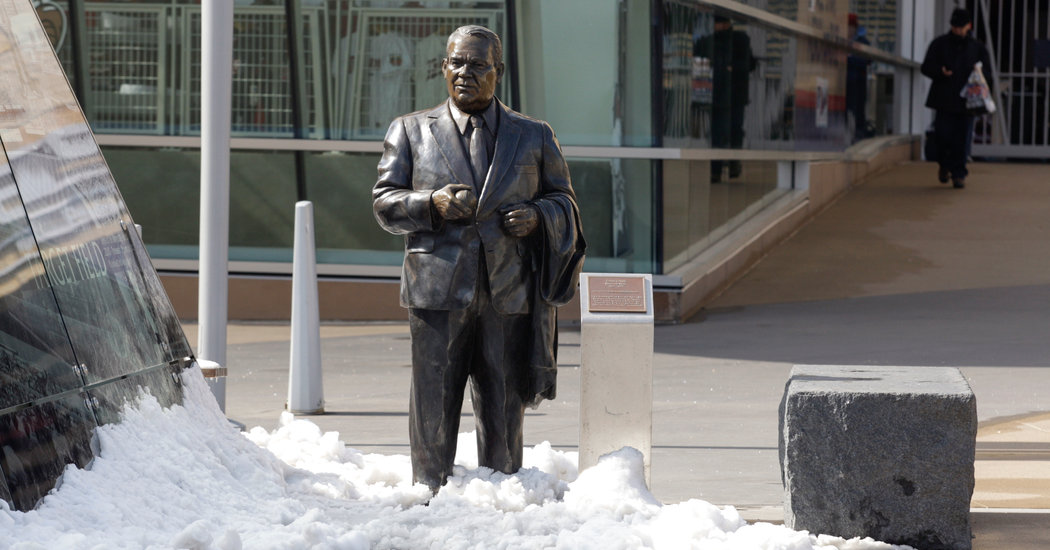 A memorial for the former N.F.L. owner George Preston Marshall in Washington and a statue of the former baseball owner Calvin Griffith in Minneapolis were removed on Friday as cities and franchises continued to reckon with the legacies of figures from their racist pasts.

The memorial for Marshall, whose team was the last in the N.F.L. to sign a black player and did so only after a government ultimatum, was removed from the spot where it had stood outside of R.F.K. Stadium by a city agency. It had been defaced overnight with red spray paint.

The Minnesota Twins said they had removed a statue of Griffith, which had stood outside Target Field since 2010, because of infamous remarks he had made about African-Americans in 1978.

The removals occurred on Juneteenth, the holiday commemorating the end of slavery in the United States.

Events DC, the agency that manages the stadium site, confirmed that the Marshall monument was being permanently removed.

“This symbol of a person who didn’t believe all men and women were created equal and who actually worked against integration is counter to all that we as people, a city, and nation represent,” Max Brown, the Events DC chairman, said in a statement.

The memorial will be permanently put into storage, Events DC said.

Marshall moved the team to Washington from Boston, where they had been known as the Braves, in 1937. His team was the last in the league to sign a black player, doing so in 1962 only after heavy pressure from the federal government, which threatened to revoke the team’s lease on its stadium.

Marshall also presided over the changing of the team nickname to Redskins. The franchise’s current owner, Daniel Snyder, has resisted calls to change it despite widespread sentiment that the name is racist. Many Washington fans, but not all, still support the name.

Marshall is a member of the Pro Football Hall of Fame and the team’s own Ring of Fame.

The removal of the memorial to Marshall, who died in 1969, comes at a time when statues and monuments around the country of figures with racist pasts are being criticized, re-examined and sometimes removed.

The Redskins did not respond to requests for comment on the statue’s removal. The team played at R.F.K. from 1961 to 1996 before moving into a new stadium in Landover, Md.

“We applaud EventsDC for their prudent action on this Juneteenth,” said John Falcicchio, the chief of staff for Mayor Muriel Bowser.

When Target Field opened in 2010, a statue of Griffith, a former Twins owner and the man responsible for moving the franchise to Minnesota from Washington in 1961, was one of several installed around the stadium.

But early on Friday morning, the Twins announced that they had removed it, saying the team “cannot remain silent and continue ignoring the racist comments he made” at a community event in 1978.

“While we acknowledge the prominent role Calvin Griffith played in our history, we cannot remain silent and continue ignoring the racist comments he made in Waseca in 1978,” the Twins said in their statement. “His disparaging words displayed a blatant intolerance and disregard for the black community that are the antithesis of what the Minnesota Twins stand for and value.”

Griffith continued: “Black people don’t go to ball games, but they’ll fill up a rassling ring and put up such a chant it’ll scare you to death. It’s unbelievable. We came here because you’ve got good, hardworking, white people here.”

Griffith also made comments about underpaying Twins star first baseman Rod Carew, who subsequently vowed never to play for Griffith again and was traded to the California Angels before the 1979 season.

Griffith sold the Twins to Carl Pohlad, a local banking executive, in 1984. Pohlad’s son, Jim, inherited the team after his father’s death in 2009.

“Our decision to memorialize Calvin Griffith with a statue reflects an ignorance on our part of systemic racism present in 1978, 2010 and today,” the Twins said. “We apologize for our failure to adequately recognize how the statue was viewed and the pain it caused for many people — both inside the Twins organization and across Twins Territory.

“We cannot remove Calvin Griffith from the history of the Minnesota Twins, but we believe removal of this statue is an important and necessary step in our ongoing commitment to provide a Target Field experience where every fan and employee feels safe and welcome.”

Earlier this month, the Pohlad family announced that it was committing $25 million to social justice causes in the wake of the death of George Floyd, who was killed after a Minneapolis police officer knelt on his neck for almost nine minutes on May 25.

Turkish Aggression Is NATO’s ‘Elephant in the Room’