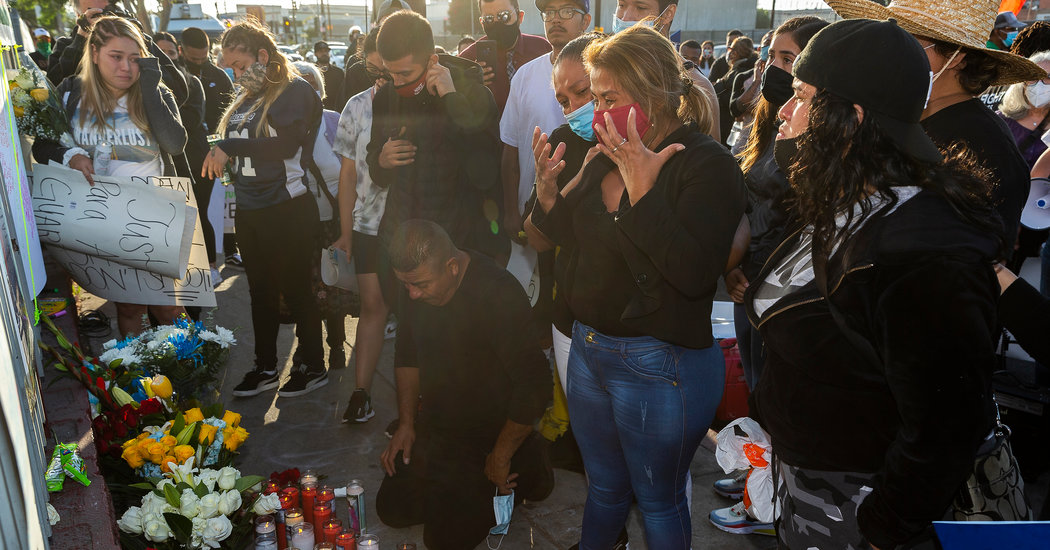 Activists and family members of an 18-year-old Latino man are calling his death in Southern California this week an unjustified police killing.

The man, Andres Guardado, was fatally shot by Los Angeles County sheriff’s deputies in Gardena, Calif., after he “produced a firearm” and ran away from them on Thursday night, the Sheriff’s Department said in a statement.

But it remained unclear what led to the confrontation amid weeks of nationwide demonstrations denouncing police brutality and racism. About 20,000 people marched near the Hollywood Walk of Fame this month in a protest organized by Black Lives Matter.

Mr. Guardado was working two jobs as a security guard, and was studying to be a mechanic at Los Angeles Trade-Technical College, according to his uncle Noe Abarca. He was killed near an auto body shop that he was providing security for that day, Mr. Abarca said.

Mr. Guardado, whose family is from El Salvador, was dedicated to working and learning his trade, his uncle said. “He was always cheerful, I never saw him sad or angry,” Mr. Abarca said in Spanish. “He had gained the respect and the admiration of our whole family.”

“I haven’t slept in two days,” he added.

Deputies from the Compton Sheriff’s Station pursued Mr. Guardado on foot and eventually shot him in the upper torso, the police said. They did not provide more details of the encounter or the deputies involved.

Detectives were trying to determine if there was any video footage of the shooting. Mr. Guardado was not wearing a security guard’s uniform, the Sheriff’s Department said, and a handgun without identifying marks or serial numbers was recovered at the scene.

It is difficult to tell how many Latinos are killed by the police because departments are not required to report consistently on race and ethnicity, said Eric Rodriguez, the senior vice president of policy and advocacy at UnidosUS, an advocacy group for Latinos.

But it is clear that a high percentage of Latinos fear that the police will use excessive force, Mr. Rodriguez said. “Something that is screaming out from the community is the feeling of being over-surveilled,” he said.

The Los Angeles Community College District released a statement supporting Mr. Guardado’s family and calling for a “full and independent investigation into the circumstances of the killing.”

“We must never be desensitized to, or normalized by, the alarming number of deaths by law enforcement of black and brown men and women in this country,” the district said.

Mr. Guardado and his father would often visit a restaurant owned by Mr. Abarca. But on Sunday — Father’s Day — his father, uncle and other relatives will be marching in a demonstration that begins at the site where Mr. Guardado was killed.

“We will be demanding justice,” Mr. Abarca said.

One of the Parkland shooting survivors is participating in an online rally focused on youth turnout.

Russians Were Urged to Return to Normal Life. Except for Putin.

One of the Parkland shooting survivors is participating in an online...