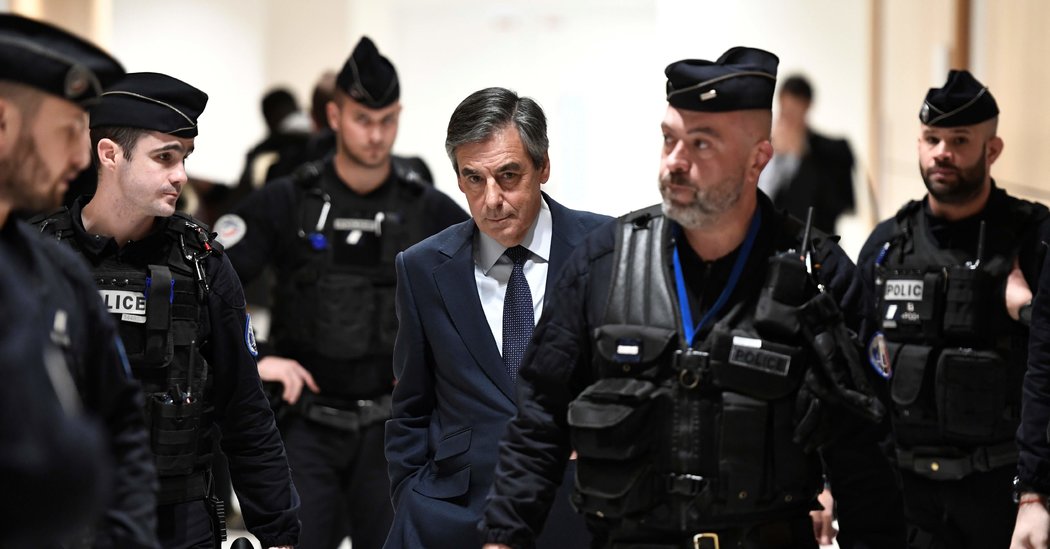 PARIS — François Fillon, a former French former prime minister, was found guilty on Monday of embezzling public funds in a scandal involving a no-show job for his wife that crippled his front-runner status in the 2017 presidential race and led to a broader resentment of France’s political elite.

Mr. Fillon, 66, who was prime minister from 2007 to 2012, was accused of paying his wife hundreds of thousands of euros from the public payroll for little or no work as his aide, over different periods between 1998 and 2013, when he served as a representative in the lower house of the French Parliament.

Mr. Fillon’s wife, Penelope Fillon, 64, was found guilty of complicity in the embezzlement. No sentencing details were announced.

Reports of Ms. Fillon’s no-show job first emerged in the satirical newspaper Le Canard Enchaîné in late January 2017, a few months before the first round of voting, and they were swiftly followed by an official investigation. The accusations were especially damaging for Mr. Fillon, a stern fiscal and social conservative who ran on an image of probity and austerity, calling for economic sacrifices and vowing to slash thousands of civil service jobs.

Mr. Fillon angrily denied wrongdoing, lashed out against the news media and pressed on as the candidate for the right-wing conservative Républicains party. He had been widely seen as the favorite in the race, ahead of Marine Le Pen, the far-right candidate, and Emmanuel Macron, then a relatively untested centrist outsider.

But his campaign was badly damaged and Mr. Fillon failed to qualify for the second round of the elections, in which Mr. Macron defeated Ms. Le Pen. Mr. Fillon has since retired from politics and is working in finance.

Mr. Fillon’s lawyers argued at the trial, held from late February to early March, that while there may have been few written traces of Ms. Fillon’s activities as a parliamentary aide, she had been her husband’s eyes and ears in his home constituency, the Sarthe region of northwestern France.

Prosecutors countered that little of what Ms. Fillon did could be defined as the usual work of a parliamentary aide — like working on legislation or drafting policy memos — and argued that Mr. Fillon had paid his wife for a “fictitious” job.

The case against Mr. Fillon tapped into broader resentment against France’s elite political class, its cozy financial arrangements and its reluctance to enact strict ethical standards. Hiring close family members as parliamentary aides was not illegal — and Mr. Fillon was not the only one to do so — but the practice was banned later in 2017.

Mr. Fillon’s lawyers sought to reopen his trial last week after Éliane Houlette, formerly France’s top financial prosecutor, told lawmakers that she had been put under intense “pressure” by her superiors while she was handling the case.

Ms. Houlette told the lawmakers during a hearing this month that supervision of the case was heavy handed, with incessant requests for updates on the proceedings and pressure to upgrade the status of the investigation to a more formal one. Ms. Houlette later said that the “pressure” was “purely of a procedural order” and had no bearing on the merits of the case against Mr. Fillon. She denied that the executive branch, then led by President François Hollande, a Socialist, had interfered in her work.

But some of Mr. Fillon’s allies, who remained bitterly convinced that the case was politically motivated, have jumped on Ms. Houlette’s statements as proof that their candidate was unfairly knocked out of the race.

Mr. Macron has ordered a top judicial oversight body to review the actions of the financial prosecutor’s office during the investigation, to see if it was able to act “without pressure” and to “to erase all doubt about the independence and impartially of the justice system in this case.”

Derek Jeter on His First Postseason With the Miami Marlins