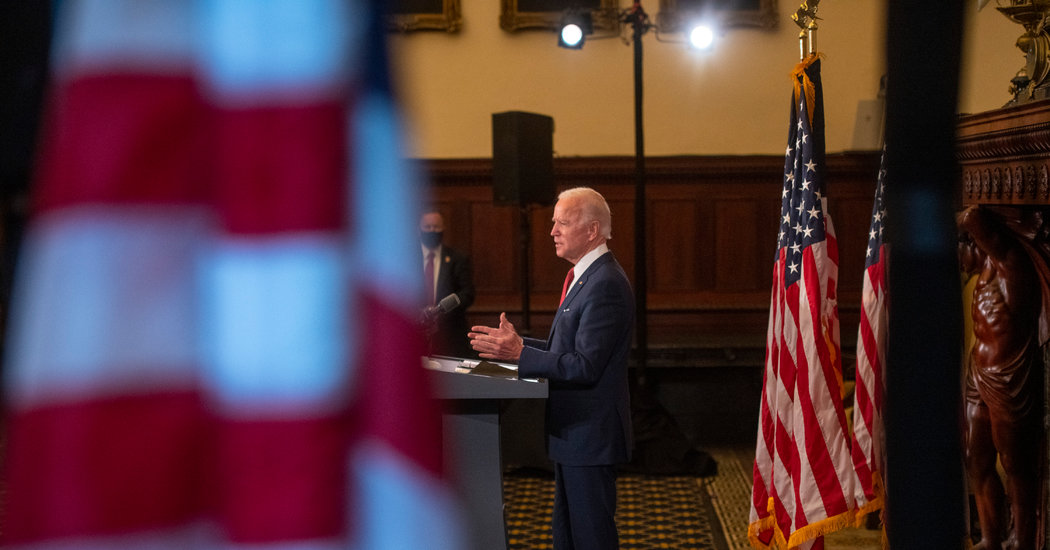 Supporters of Joseph R. Biden Jr. have begun raising money for his presidential transition committee to pay for a small staff of policy advisers and others who will begin planning what a potential Biden administration would look like in 2021.

Earlier in June, Mr. Biden’s campaign announced the names of some of the initial staff members who will work for the transition committee. The day-to-day operations will be led by Yohannes Abraham, a former Obama administration official, and Mr. Biden’s former chief of staff and Senate successor, Ted Kaufman, will oversee the broader effort.

Mr. Biden has announced his core team and begun fund-raising earlier than either President Trump (his first checks started arriving in July) or Hillary Clinton (her leadership team was not announced until August) did four years ago, but within the timeline recommended by transition experts.

The Biden campaign has not widely advertised the existence of the transition committee as a fund-raising vehicle, preferring that most donors give first to the campaign itself, or even the Democratic National Committee. Even some members of Mr. Biden’s national finance committee have been unaware of its existence; donors have been mostly invited to give, bestowing the committee something of an aura of exclusivity.

“Our efforts in this regard are quiet and it is important that they stay that way for now — precisely so we do not distract attention from the core task of winning the election,” read talking points circulated by the campaign in May. “But we are looking to raise sufficient funds to prepare for a core transition team to be announced at the end of the summer.”

The document also outlined that the donors to the transition committee would follow the same strictures as the campaign, including not accepting funds from registered lobbyists, corporations or their political action committees, and fossil fuel executives, among others.

Records show that paperwork for the group, formally a 501(c)(4) nonprofit called the PT Fund Inc., was filed on May 1 in Delaware, Mr. Biden’s home state.

At least four officials have been soliciting money for the transition committee, according to people familiar with the matter: Jeff Zients, a former director of the National Economic Council under President Barack Obama; Mark Angelson, a businessman and former vice chairman of the Biden Foundation; Alex Katz, a former aide to Senator Chuck Schumer who now works at the investment firm Blackstone; and Evan Ryan, a former aide to Mr. Biden.

Mr. Biden told donors in late April that Mr. Kaufman was helping steer the early formation of a transition team. “You can’t wait until you win, if you win,” Mr. Biden said. “You’ve got to start right now.”

Mr. Kaufman worked on transition-planning legislation during his time in the Senate. Under the current law, the nominees of major parties gain access to federal money for office space, computers and other services beginning in September, but must raise funds to pay for personnel.

The Center for Presidential Transition, an arm of the nonprofit group the Partnership for Public Service, estimates that total costs run $10 million to $12 million, with the federal government paying about half, including staff salaries after the election for the president-elect.

The Biden transition committee has raised nearly $700,000, according to a person familiar with the matter.

“What the Biden team is doing is totally in line with what prior candidates have done and what best practices are in terms for transition planning,” said David Marchick, the director of the Center for Presidential Transition.

Mr. Biden has expressed some skepticism that the Trump administration will make a potential transition easy.

“The Bush administration worked very closely with Barack and me, with our administration, in terms of handing over power in the transition,” Mr. Biden said in April, recalling the process in 2008. “I hope it’s as smooth as it was then. I doubt it, but I hope so.”

Other officials the Biden campaign has announced hiring for the transition are Avril Haines, a deputy national security adviser during the Obama administration who will manage national security and foreign policy planning; Angela Ramirez, the chief of staff to Representative Ben Ray Luján, Democrat of New Mexico; Gautam Raghavan, the chief of staff to Representative Pramila Jayapal, Democrat of Washington and a co-chair of the House Progressive Caucus; Julie Siegel, a former top adviser to Senator Elizabeth Warren; and Ms. Ryan, the former Biden aide, who is married to Antony Blinken, a top Biden foreign policy adviser.