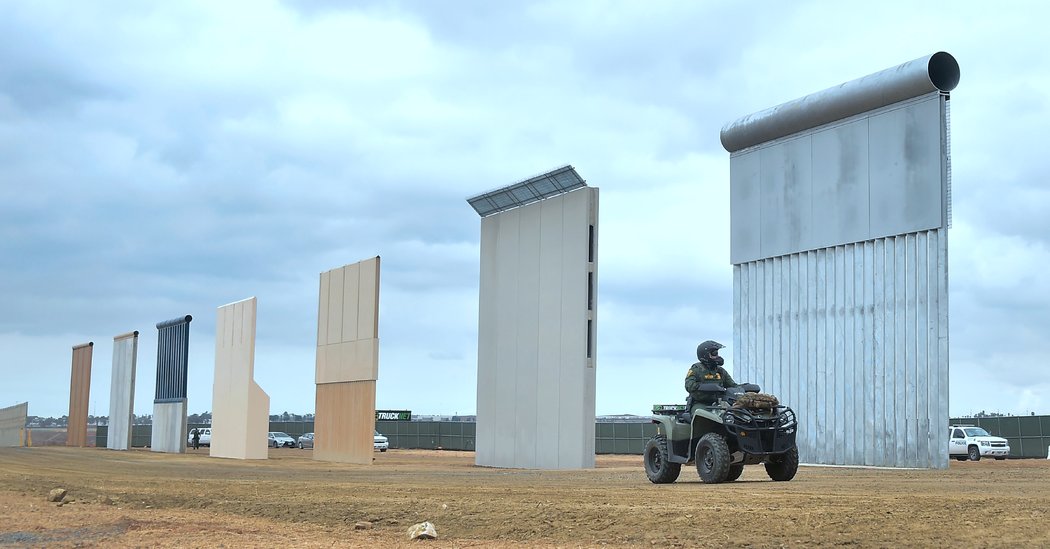 It’s hard to imagine a more apt setting for an American dystopia: an exposition far out in the desert, right on the United States-Mexico border, where contractors display 30-foot-tall prototypes of President Donald Trump’s “big beautiful wall.” There are no protesters because the government banished them to an empty lot several miles away. Border agents, sheriffs and Homeland Security officials peruse the site, debating the merits of each design. Do they prefer a barrier that is solid like a prison wall or with slits to allow them to see threats as they approach from Mexico? Stick with plain cement or go for the royal blue? Will the wall withstand climbers, diggers, pickaxes, torches and sledgehammers?

The endeavor is absurd, and even the contractors seem to know it. “The 2,000 miles is never going to happen in a hundred million years,” one tells DW Gibson, the author of “14 Miles.” Yet, the project continues.

Two hundred meters from the prototype site, on the Mexican side of the border, a young woman named Aurelia Avila watches the scene unfold daily from her scrap wood home. She can’t come to terms with why the American president wants another wall. Between her house and the United States there is already a nine-foot barrier of corrugated metal, and behind that there is another that is twice as tall. Then there is the impossible-to-navigate bureaucracy that keeps people like her out — she was born in America and came to Mexico as an infant, but she can’t get the documents to prove she’s American.

Avila is one of a kaleidoscope of characters who appear in Gibson’s book. As the wall makes its slow march forward, Gibson sets out on a quest to meet people whose lives are connected to the border. It’s hard to think of an archetype he doesn’t profile. Gibson talks to border agents, a former coyote, members of the patriot movement, activists who trek into the desert to drop jugs of water for thirsty migrants, members of the much-maligned immigrant caravan that walked from Guatemala, a man whose job is to explore tunnels dug under the border and many more.

Some of the people Gibson encounters view the border as the first line of defense against those who will degrade our country. For others, like a Haitian asylum seeker, the border is one obstacle among many in the search for a better life. Then there are those for whom the border is a business opportunity: maquila owners, fentanyl dealers and the 2016 presidential hopeful and real estate baron Roque De La Fuente. De La Fuente says the wall “is a crazy-stupid idea,” but in the end, he says, “I’m in the business of making money.” Owning 2,000 acres of desert land abutting the border, De La Fuente essentially has the government surrounded. He knows they’ll come knocking when construction begins, and he won’t be selling cheap. The feds once asked to buy land from him in order to build an immigrant detention center near a border crossing, and De La Fuente offered to sell the plot for $8.4 million. It was four times more than what the government was willing to pay, so they tried to take it from him using eminent domain. He took the government to court and came out with $39 million.

Money does wonders to help one sleep at night. Consider the contractor who tells Gibson he is “pro-immigrant,” but “if they’re going to build a wall, then I think it needs to be done right.” His “very liberal” sisters are his business partners and he convinces them to submit a proposal by promising they’d use local help from both sides of the border. And where the government was only insisting that the north side of the wall be decorated, their proposal would “enhance” both sides. “One of the things I personally believe is that if you build a fence, you ask your neighbor what they would like to look at,” the contractor says. No one of course is asking the neighbors, but such window dressings help soothe the conscience of a conflicted capitalist.

The problem, officials are repeatedly telling Gibson, is illegal immigration. They have no issues with people who enter legally. One of the faults of this logic is that many who attempt to seek asylum in America are turned away by customs agents at the border on orders of the president. This policy is illegal; United States law requires border authorities to refer them to asylum officers who will determine whether or not they are safe to return home. When they cannot enter lawfully, some find other ways. On a number of occasions while Gibson is at the prototype site, he witnesses people climbing over the fence. They try to cross there for a reason: Border patrol agents are always present, so they know they can turn themselves in to be shipped off to detention and begin their asylum proceedings.

The book’s 60 short chapters are easy to gobble up, especially since Gibson is constantly peppering us with surreal tidbits. At one point, he follows around a correspondent from the conspiracy-mongering media outlet Infowars while she lobs candy at the feet of children in the migrant caravan. Looking at her warily, few take the bait. “Obviously if these kids were hungry,” she says into her camera, “they would be taking the food. Clearly they are being well fed here in Mexico.” The correspondent scours the crowd and finds a trans woman. The woman tells the correspondent she has people back home who love her, but the possibility of violence is too high. You can feel the gears of the Infowars brain turning, crafting a narrative that completely edits out the part about danger: Trans person comes to America, despite having people who love her back home. “And there are more of you coming?” the correspondent asks.

The juicy anecdotes keep the book spicy, but the sheer number of people crammed into the pages prevents any character from ever becoming fully developed. Gibson also falls into a familiar pitfall of contemporary journalistic writing, putting himself in the story even though his character doesn’t give us any deeper insight into the subject. The book sometimes reads a bit like a travelogue of Gibson’s own adventures. It can be disjointing to go from a state representative discussing immigration reform to Gibson quipping about the bad coffee he’s drinking at Denny’s.

But Gibson’s book stands out from the pack in other important ways. So much of today’s journalism lacks context for Trump’s immigration policies. In “14 Miles,” the president’s attack on immigration is rightly presented as the latest in a long history of attempts to keep, or kick, foreigners out. In the 1950s, Gibson reminds us, Operation Wetback enforced large-scale deportations of workers who stayed in the country after their manual labor contracts expired. In 1994, the Clinton administration implemented Nafta, opening the border for goods and industry while further restricting the flow of people.

If anything, Trump’s wall is the embodiment of a longstanding illusion of American permanence and superiority. In one chapter, a native Kumeyaay tells Gibson that the land where the prototype site was built was once the territory of his tribe. The Spanish took it from them in 1798, then the Mexicans took it in 1821, then the United States took it in 1848. “You know, the U.S. has only been a country for a little more than 200 years,” the man tells Gibson. “They think it’s going to be around forever. My friend, these boundaries are not static.”

“But in America,” Gibson writes, “nothing says stasis like a 30-foot-high barrier.”

Biden asks Congress about splitting days between impeachment and confirming his nominees and passing...

As the Georgia Runoffs Arrive, a New Book Says the Senate Is Broken

Which Candidate Do Voters Trust to Handle the Unrest?