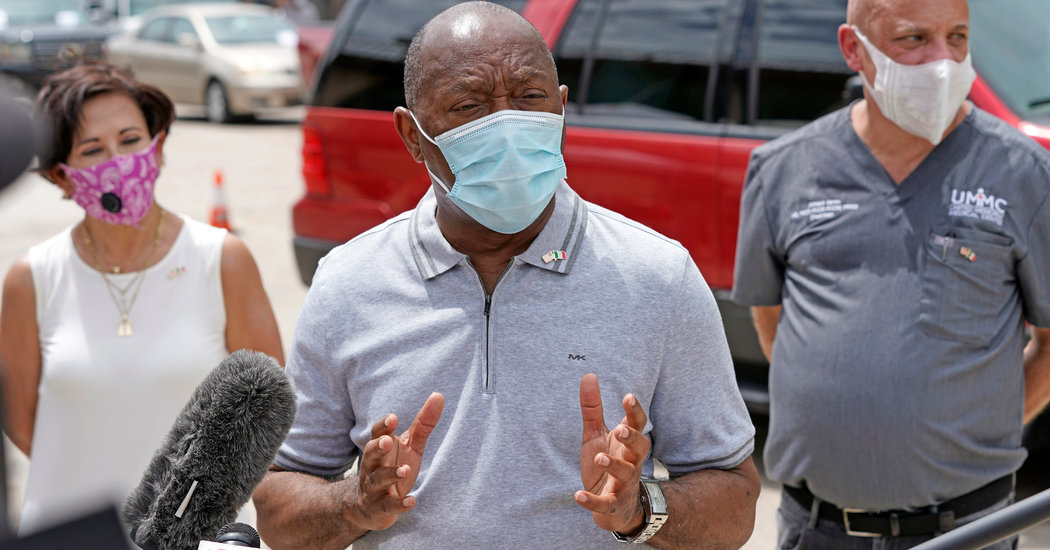 HOUSTON — Local outcry had grown for weeks over plans by the Texas Republican Party to hold its convention in Houston in the middle of one of the nation’s worst coronavirus outbreaks.

Sponsors, including the Texas Medical Association, dropped out. Gov. Greg Abbott said he would appear only by video. The city’s top public health official called it a “clear and present danger.”

Then on Wednesday, Mayor Sylvester Turner of Houston put an end to the standoff, effectively canceling the gathering a week before it was scheduled by pulling out of a contract to host the event in a city-run convention center.

The decision by a Democratic mayor to cancel the state’s largest gathering of Republicans set the state up for rancorous finger pointing and potential legal action. Even before the announcement, Republican Party officials suggested that Mr. Turner did not have the authority to do so.

It also focused renewed attention on the Republican National Convention, where President Trump is expected to be nominated to run for a second term at an in-person convention in Jacksonville, Fla., next month.

The Texas party convention would have rivaled that event in size, according to organizers, who said they expected some 6,000 delegates to attend despite the consistently rising numbers of infections in Houston. The city neared 40,000 total cases on Wednesday, with about 600 people currently hospitalized in intensive care. More than 400 have died.

Mr. Turner said he made the decision to cancel the event after hoping and expecting that Republican officials would do so voluntarily. He said he feared for the safety not only of the convention goers from all over the state but of those who would be working around them — speaking not only as mayor, but also as the son of a hotel maid.

A convention, he said, is different from the recent street protests that have brought thousands of people together in the city. “Nobody is making and serving them dinner. Nobody is making up their beds and cleaning their rooms,” he said of those who attended protests. “When you go marching and protesting, you are assuming that responsibility yourself. But when you are in an indoor event, like a conference, it requires ancillary support, so you are involuntarily including other people in order to facilitate that event.”

Last week, the state party’s executive board voted to go ahead with the event rather than hold it virtually, as the state’s Democratic Party planned to do.

Their decision, in a vote of 40 to 20, came hours after Mr. Abbott ordered all Texans to wear masks, with few exceptions, when in public. Some older Republicans had expressed fears of being exposed to the virus but others insisted that forging ahead with the Houston meeting reaffirmed the party’s embrace of courage and individual freedoms.

“Our legal team is assessing the ability of the city to act at this time in this manner and weighing our legal options,” said James Dickey, the chairman of the Republican Party of Texas. “We are prepared to take all necessary steps to proceed in the peaceable exercise of our constitutionally protected rights.”

At the same time, many of the elected officials who were scheduled to appear at the event, in the George R. Brown Convention Center, had already said that they would speak by video instead. That included Mr. Abbott and the lieutenant governor, Dan Patrick, a favorite of conservative party members.

“All the elected officials are switching from a live, in-person speech to videos,” Kyle Whatley, the party’s executive director, said during a town hall live-streamed on Tuesday night and reported by the Texas Tribune.

Amid LAC tension with China, government considering `Made in India` carbines for defence forces

From the Start, Federal Agents Demanded a Role in Suppressing Anti-Racism Protests