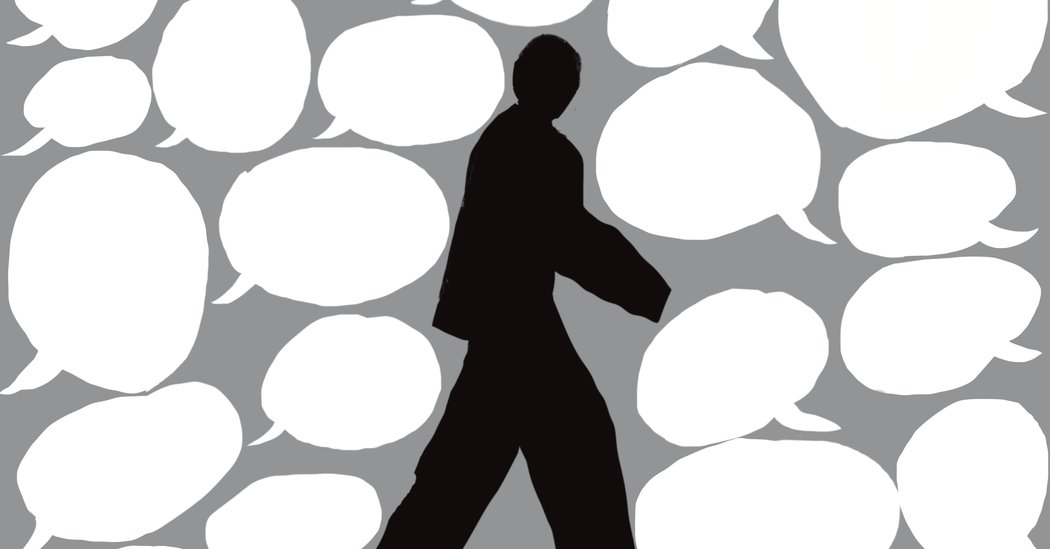 To fill the void created by not being able to play basketball for months, I’ve cobbled together a daily workout. I jump rope, I do some light weight lifting, I think real long and hard about doing some push-ups, and I take walks around my neighborhood. It’s a grid and it’s relatively flat, so it’s an easy walk. I follow a path that takes me up and down each street until I’ve reached 10,000 steps, the arbitrary point where I feel accomplished enough to give myself permission to eat an ice cream bar.

I prefer these walks in the evening, because they provide a 45-minute window to escape both the relentless sameness of the news and the quarantine. Sometimes there are others outside, walking a dog or sitting on a stoop, and we’ll exchange brief and socially distant pleasantries and go about our ways.

And then sometimes white people recognize me.

RWN: I was thinking about everything happening in the country.

Me: I’m thinking of things I’d rather do than have this conversation.

RWN: And we’ve come so far, but have so much farther to go.

RWN: And if you ever wanted to sit and talk about what white people can do ——

Me: Or bungee-jumping with dental floss.

RWN: —— maybe, when everything settles, we can get a coffee and talk about racism.

We’re in the midst of the greatest sociopolitical uprising since the 1960s. What began as an indictment of the ubiquity, power and cultural cachet of law enforcement has morphed into a national conversation, where anyone, any business, any industry, any institution that profits from anti-blackness might find itself called out. (It was both not funny and really funny to watch brands try to pre-empt this attention by rushing to release statements of solidarity in early June. Still, thank you, Kellogg’s, for your commitment to Black Lives Matter.)

A predictable result of this upheaval has been a critical mass of white people either doing the absolute least or the absolute most. This is where I’m supposed to write, “Not all white people.” I won’t. But if it helps, you can imagine I did.

The people doing the least can be found in every viral video clip of a white person hysterically refusing to wear a mask at Trader Joe’s. These people are unhinged, dangerous and just plain goofy, willing to die (and kill) over Jicama Wraps and Kale Gnocchi. And the people doing the most? Well, the most happens anytime a white person encounters a Black person who writes about race — or just a Black person who just happens to be Black — and the Serious Conversation About Racism (SCAR) must ensue. This isn’t a new phenomenon. I’ve been SCARed before in the grocery store express aisle, between pickup hoop games at the gym, while getting a colonoscopy, and at least 82 percent of the unsolicited emails I get are drive-by SCARings. But now America feels like a deleted scene from “Get Out.” Or better yet, “The Sixth Sense.” But instead of seeing dead people, white people see us as walking, talking, antiracist book lists.

There’s no better example of the absolute most than the recent ABC News feature on Ernest Skelton. Mr. Skelton, an appliance technician, was just doing his job when the white woman whose house he was working on grilled him about the plight of blacks in America. He shared that racism is, um, bad. The woman, Caroline Brock, wrote a post about their conversation on Facebook, and it went viral. Local news stations called, and they eventually appeared on “Nightline” as an example of what happens when America allows itself to “heal from the heart.” But all I can think about is this man trying to fix a sink while taking a random pop quiz about redlining.

I guess I understand the compulsion to find somewhere to engage this national conversation, even if that space is shoehorned. It feels sometimes like double dutch, as if white people are waiting on the sidewalk for a cue to jump in. And today’s best seller lists are stocked with guidebooks for navigating this terrain. Two of the most popular picks — “How to Be an Antiracist” and “So You Want to Talk About Race”— are by my friends. But I doubt either author wishes to be SCAR-bombed at Jiffy Lube.

The white people who do this don’t realize (or maybe just don’t give a damn) that we’re on different timelines. You learned yesterday what white privilege means? Great! Welcome to 1962. This, however, doesn’t mean I need to engage you about it today. Or tomorrow. Or ever. And most important, maybe I’m out walking, shopping or playing with my children, or out just, I don’t know, staring at a fire hydrant because I want to give myself a break from writing about, from speaking about, from thinking about and from raging about racism, and you’re asking me to work for you for free. And that’s what it is: work. Free labor. An absolution device for your conscience, provided by me, shipped for free. There’s nothing inherently valuable for me out of that exchange. I don’t have a bucket list. But if I did, a 17-minute conversation about lynching, while in line for ice cream, wouldn’t be on it.

And, well, how do I put this delicately? I’ve never met him before, so perhaps I’m being presumptuous. But I doubt the Road Runner, after a day of outrunning, outscheming and outlasting Wile E. Coyote, wishes to come home and explain coyote supremacy to the liberal coyotes who live in his neighborhood.

I recently grew desperate enough to buy one of those portable driveway basketball hoops, despite not owning or having reasonable access to a driveway. For two weeks it sat unassembled in my garage. Each time I saw it, I almost persuaded myself to put it together, but the lack of anywhere to set it up dampened my motivation. And then, I was approached during my evening walk by a woman who bought my book (“Thanks!”), and she asked if I saw the email she sent me about microaggressions.

The hoop was assembled that weekend. Still don’t know where to put it. But I will find somewhere.

My tweets were not intended to disrespect Supreme Court, will pay fine: Prashant Bhushan

Testing Nursing Home Workers Can Help Stop Coronavirus. But Who Should Pay?

White Supremacy Was Her World. And Then She Left.

Customs thwarts smuggling of British currency worth over Rs 38 lakh to Singapore in...