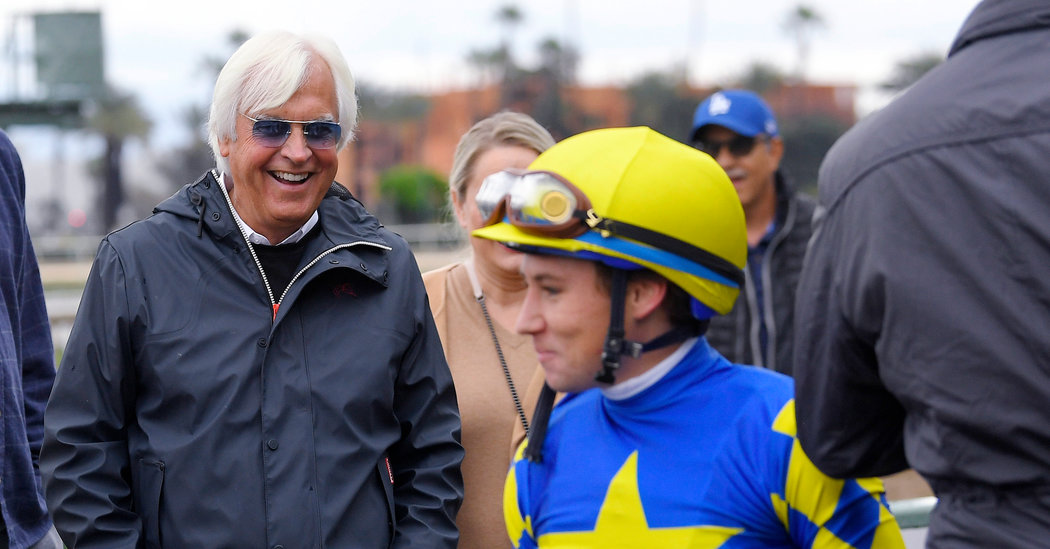 The Arkansas Racing Commission suspended the Hall of Fame trainer Bob Baffert for 15 days on Wednesday and vacated the victories of two of his horses after they tested positive for a banned substance.

One of the horses, Charlatan, won a division of the Arkansas Derby on May 2. The colt’s owners will forfeit the $300,000 in prize money for finishing first. The owner of the other horse, a filly named Gamine, must forfeit a $36,000 first-place check won in an allowance race earlier that day. The suspension will run from Aug. 1 to 15.

On June 20, Gamine won the Acorn Stakes at Belmont Park in New York by nearly 19 lengths in a stakes-record time of 1 minute 32.55 seconds, a performance that inspired talk of the filly taking on males in the Kentucky Derby, which is scheduled for Sept. 5.

Baffert is America’s pre-eminent active trainer. He has won the Kentucky Derby five times. In 2015, he trained American Pharoah, the first horse to win the Triple Crown since Affirmed in 1978. Baffert won his second Triple Crown in 2018 with the colt Justify.

Baffert has also caught the attention of regulators over the years. These are his 26th and 27th drug violations, according to public records compiled by the Association of Racetrack Commissioners International and the Thoroughbred Regulatory Rulings database maintained by the Jockey Club.

Charlatan and Gamine had two samples test positive for lidocaine, a local numbing agent, according to a person who spoke on condition of anonymity because the case had not been fully adjudicated. The Times reported on the positive tests of their first samples in late May.

Lidocaine can be used legitimately for suturing wounds or as a diagnostic tool to determine if horses are sound enough to compete. The drug may also be present in ointments or creams used on cuts or abrasions. It is regulated because of its potential to mask lameness in an unsound horse.

In a hearing, Baffert and his representatives argued that the horses were accidentally exposed to the lidocaine by an assistant trainer, Jimmy Barnes, who had applied a medicinal patch to his own back. Barnes had broken his pelvis, and the brand of patch he used, Salonpas, contains small amounts of Lidocaine. The drug was transferred from his hands through the application of a tongue tie, they said.

Four days after Charlatan’s runaway victory in the Arkansas Derby, the colt’s stallion rights were sold for an undisclosed sum to Hill ‘n’ Dale Farms. The colt missed the Belmont Stakes with an ankle injury, and Baffert has said he will miss the Kentucky Derby, as well. Charlatan may be able to come back in time for the Preakness on Oct. 3.

Baffert-trained Justify failed a drug test after winning the Santa Anita Derby, nearly a month before the 2018 Kentucky Derby. Justify wound up winning the Derby, the Preakness and the Belmont that year for the Triple Crown. The rule on the books when Justify failed the test required that the horse be disqualified, forfeiting both his prize money from the Santa Anita Derby and his entry into the Kentucky Derby.

California racing officials investigated the failed test for four months, allowing Justify to keep competing long enough to win the Triple Crown. In August, after Justify’s breeding rights had been sold for $60 million, the California Horse Racing Board — whose chairman at the time, Chuck Winner, had employed Baffert to train his horses — disposed of the inquiry in a rare closed-door session.

The board ruled that Justify’s positive test for the banned drug scopolamine had been the result of “environmental contamination,” not intentional doping. Baffert has denied any wrongdoing, but the quantity of the drug found in Justify suggested that it was present not because of contamination in his feed or his bedding but rather because of an effort to enhance performance, according to Dr. Rick Sams, who ran the drug lab for the Kentucky Horse Racing Commission from 2011 to 2018.

Mick Ruis, the owner of the second-place horse in the Santa Anita Derby, is in litigation with California officials to have his colt Bolt d’Oro declared the winner and awarded the $600,000 first-place check.

We Got ‘Hamilton.’ Why Can’t We Stream Every Broadway Show?