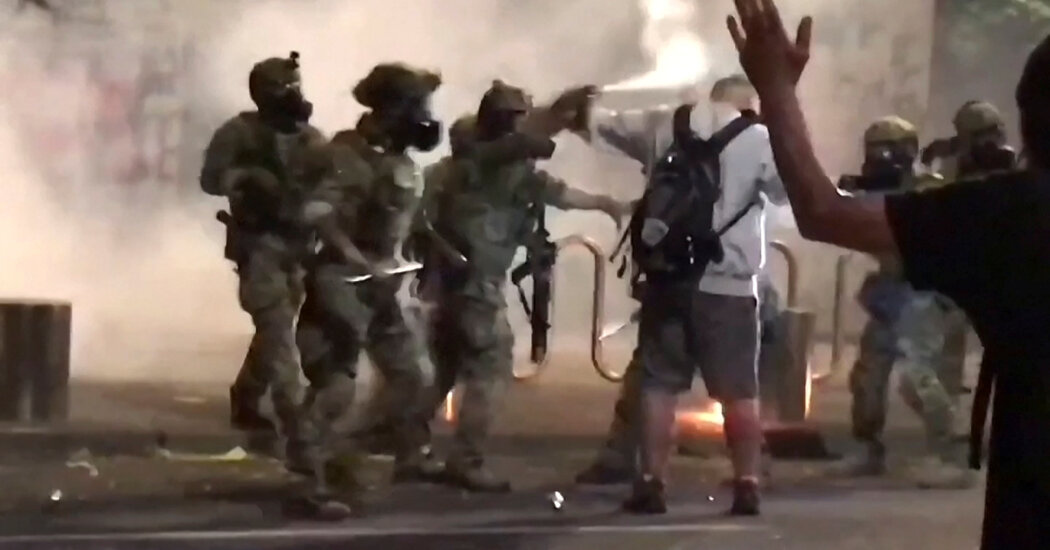 Christopher J. David had largely ignored the protests in downtown Portland, Ore., but when he saw videos of unidentified federal agents grabbing protesters off the street and throwing them into rented minivans, he felt compelled to act.

Mr. David, a Navy veteran, said that federal agents’ use of violent tactics against protesters, without the support of the mayor, the governor or local law enforcement, was a violation of the oaths that agents take to support, uphold and defend the Constitution.

And so, on Saturday, he took a bus downtown to ask the officers how they squared their actions with that oath.

Instead of getting an answer, Mr. David was beaten with a baton by one federal officer as another doused him with pepper spray, according to video footage of the encounter. After he walked away from the confrontation, Mr. David was taken to a nearby hospital, where a specialist said his right hand was broken and would require surgery to install pins, screws and plates. He declined pain medication.

“I wasn’t even paying attention to the protests at all until the feds came in,” Mr. David said in an interview on Sunday night. “That’s when I became aware.”

Protesters have been in the streets of Portland for more than 50 consecutive days, in response to the killing of George Floyd by the police in Minneapolis. The arrival of federal officers in the city has re-energized the demonstrations, which continued on Sunday night, with tear gas once again deployed by U.S. agents.

Mr. David, a graduate of the U.S. Naval Academy and a former varsity wrestler who has lived in Portland since 2006, said he had attended only one protest before — a march for women’s rights in Washington, D.C., in 1989. As a 53-year-old man with health concerns, he said that the risk of the coronavirus was reason enough to stay away from downtown Portland.

“It just didn’t seem worth it to me at that point, but it reached that threshold when I saw Pinochet-type behavior from our own government,” he said, referring to the Chilean dictator.

With his mind made up, Mr. David grabbed a backpack with some essential items — migraine medicine, nicotine gum, his wallet and ID cards — and took a bus downtown, arriving near the Mark O. Hatfield U.S. Courthouse about 8:15 p.m.

The courthouse has become a focus of protesters, as well as the federal homeland security agents who have been dispatched to protect it. But the response by those agents in Portland has prompted a backlash over whether the officers are exceeding their arrest authority and violating the rights of protesters by detaining demonstrators in the area around the federal courthouse.

On Mr. David’s backpack were patches commemorating his time as an officer in the Navy’s Civil Engineering Corps, serving with the construction battalions — the famed Seabees.

He also wore a heather gray sweatshirt with the word “Navy” emblazoned in blue across the top and a ball cap for the Academy’s wrestling team. He wanted the officers to know by sight that he was a veteran, and someone they could talk to.

“I identified the hell out of myself for a reason, I want to give them pause so we could talk,” he said. “So I wanted to go down there to tell them that I believed they were not following their oath to the Constitution. That was my goal.”

By 10:45 p.m., Mr. David was just about to leave to return home, he said, when some protesters began removing fencing around the courthouse and federal officers emerged. He made his way to a clutch of federal agents.

A video shot by Zane Sparling, a reporter with The Portland Tribune, captured what happened next. Officers in camouflage and gas masks beat Mr. David with batons and blasted pepper spray at his face. The shaky cellphone video shows him briefly shoving away the hand of the officer with the spray-can before turning around, walking away and defiantly throwing up the middle fingers of both hands. He turned and faced the officers again, raising his middle fingers even higher — though a strike from a baton had just shattered his dominant right hand.

Internet users quickly called him “Captain Portland” for barely flinching at the blows. Noting how at 6 feet 2 inches tall he towered over the officers, some people compared him to the “Game of Thrones” character known as The Mountain. On Twitter, he went from having a handful of followers before the incident to more than 52,000 as of Monday morning.

“My life has turned pretty dramatically weird,” he said.