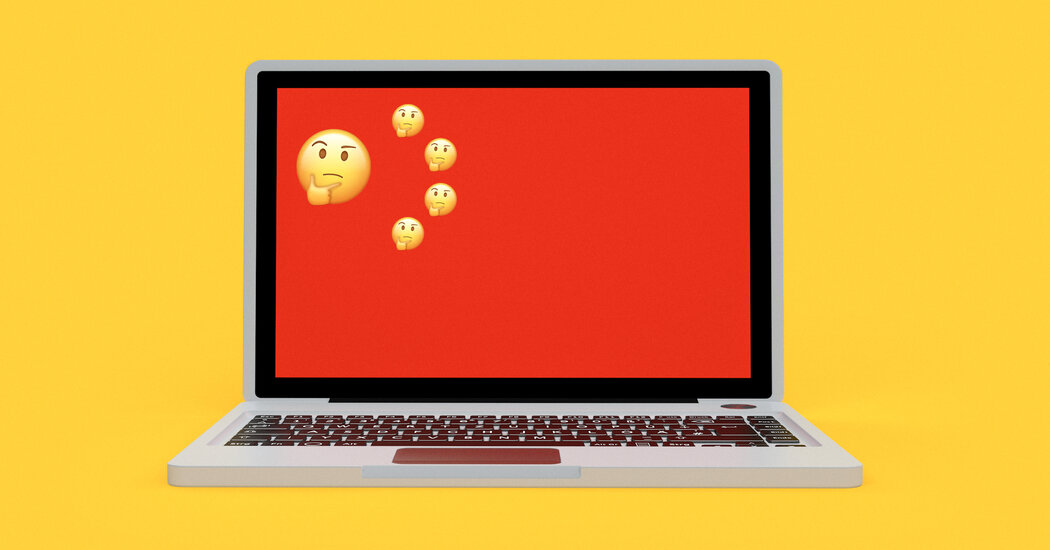 Technology is part of the tug of war between the United States and China. But let me offer some advice: When you hear an American technology executive mention China, put on your hmmmm face. Ditto when you hear a U.S. government official talk about China in the context of technology.

U.S. tech companies love to suggest that anything that hurts them somehow opens the door to China’s technology dominance. And American politicians sometimes appear to fan fears of Chinese technology for selfish reasons.

There are legitimate concerns about China’s shaping global technology norms, seeking to swipe America’s tech secrets, sponsoring criminal hackers or using tech for political aims. But how can the American public fairly evaluate technology policy when powerful people and companies use “but China …” as a catchall boogeyman?

The implication — often repeated by Zuckerberg and other tech executives — is that if U.S. lawmakers put speed bumps in front of America’s digital stars, then … something something … China will rule technology.

If it feels like I skipped some steps, that’s what the tech companies are doing. If they brought up worries about China giving a leg up to homegrown tech companies through financial assistance or spreading government propaganda online, I might have some sympathy. But what they’re doing instead is fanning China fear in a disingenuous attempt to distract us.

Americans can want our companies to thrive AND want our corporations to have guardrails. Protecting Americans from potential technology abuses doesn’t destroy U.S. innovation or strengthen any Chinese company.

U.S. government officials have a “but China” problem, too. President Trump’s campaign ran ads on Facebook in recent days that accused TikTok, the video app from the Chinese internet company ByteDance, of spying on Americans by harvesting information from people’s smartphones. (The researchers who identified the data collection mentioned in the ads said that many other smartphone apps do the same thing.)

Look, I understand in principle why U.S. officials are concerned about TikTok’s corporate owner, and likewise about the role of China’s technology giant Huawei as an essential cog in the internet. It’s also fair for politicians and Attorney General William P. Barr to question whether American tech companies are hurting the country when they comply with Chinese laws and norms.

But politicians, like American tech bosses, engage in fearmongering about Chinese tech so often that it’s hard to know when to believe them.

If politicians and policymakers wanted to do more to support U.S. technology, they could consider investing more money domestically in critical tech, including computer chips and artificial intelligence. They could help more foreign students stay in the United States to start the next great American companies. They could craft effective public health measures to tame a pandemic that threatens the competitiveness of U.S. companies.

Or they can say “but China” and let us fill in the blanks in this catchall fear tactic. When you hear U.S. tech executives or politicians blurt out China, remind yourself to consider what they really mean.

One of the inequalities that this pandemic has exposed is just how devastating it can be for Americans who can’t access or afford reliable internet service for remote work, school and other activities.

In a recent editorial, The New York Times wrote that it can’t be acceptable for millions of Americans to go without an essential service of modern life, or be forced to sit in parking lots to piggyback on reliable internet service.

I asked Greg Bensinger, a member of the Opinion section’s editorial board, to follow up with three policies that he believed would help improve the country’s internet service. Here’s what he said:

Independent estimates place the number at 42 million or more without good service.

It’s important to get it right because these numbers dictate federal spending on extending broadband service. The F.C.C. should instead use accounting methods that are independently verifiable and dive into census blocks to see the breadth of coverage.

2) Revamp a subsidy for low-income Americans: In cities that generally have good internet networks, monthly subscription fees are a burden, as are costs for laptops and tablets to access the internet. The F.C.C. has programs for subsidizing telephone service for low-income Americans — particularly the one known as Lifeline — that could be revamped to include subsidies for monthly internet costs.

3) Get the government involved upfront in paying for internet infrastructure: The federal government should directly fund an internet build out. As it stands today, internet service providers generally seek subsidies from the government after they have built internet networks. That doesn’t give companies an incentive to reach areas where profits may be harder to come by because the funds aren’t guaranteed upfront.

A man and his dog are each eating a burrito. You’re welcome.

We want to hear from you. Tell us what you think of this newsletter and what else you’d like us to explore. You can reach us at ontech@nytimes.com.

Trump’s disclosure upends the campaign in its final stretch.