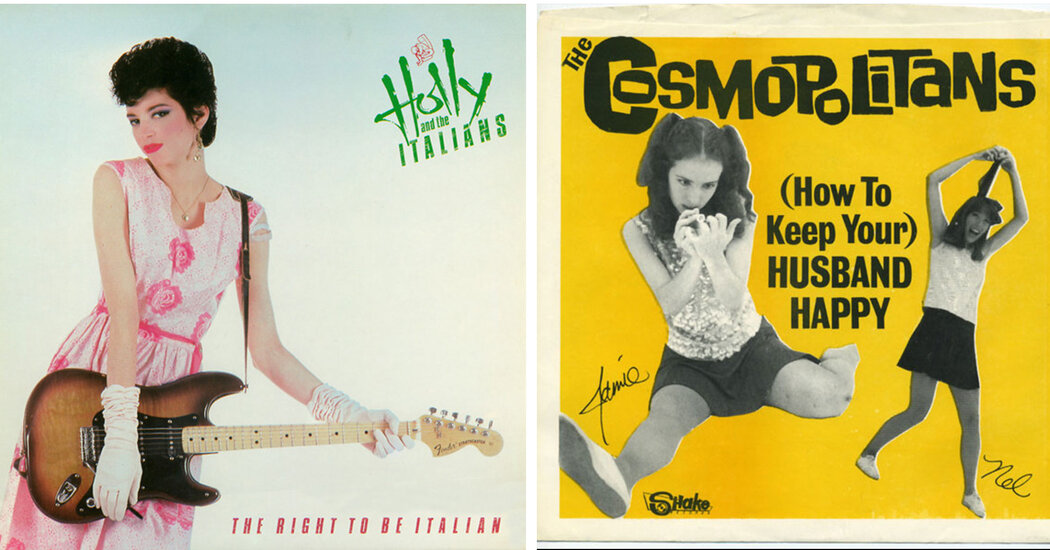 Punk began as a reaction to both the blandness and bombast of rock’s ruling class. And the shrapnel from its mid-70s explosion struck more than just a nerve, triggering a flare-up of creativity colored by a spectrum of textures, styles and ideas. The Ramones and the Sex Pistols may have led the way, but it took bands like the Police, the Cars and Talking Heads to usher elements of punk aesthetics into the mainstream. While these new wave bands couldn’t help but sand down most of the rough edges, some of the spikiness and spirit of ’76 remained.

But for every Kate Bush, Blondie, Bow Wow Wow or Go-Go, there were lesser-known female artists who exuded both sharp, shoulder-padded glamour and beehived, boho cool, often mixed with quick wit and sass. The 12 songs below — obscure singles, deep cuts and near misses — reveal a hidden history of distaff pop.

With its squealing Farfisa, Southern-accented shout-singing, and frantic, frugging rhythm, this plucky novelty track resembles nothing so much as a great lost B-52’s B-side. The jangle-pop pioneer and future R.E.M. producer Mitch Easter helps out on guitar and drums as Jamie Sims and Nel Moore read 13 real rules off the back cover of a 1964 instructional album by TV fitness personality Debbie Drake (“Four: Be interested in him and the things he does”). Kitsch has rarely sounded this subversive.

The tough-talking power pop of early Blondie lives in this sultry, spy-soundtracky number, partly thanks to the producer Mike Chapman, who recorded the breakthrough “Parallel Lines” with Debbie Harry’s group two years earlier. Though the band went nowhere, the singer-songwriter-guitarist Shaun Brighton achieved modest success as a member of the Puppets, whose one-and-done electro-dance hit “The Way of Life” burned brightly on new-wave radio circa 1983. And bandmate Lauren Agnelli later donned a beret and dark shades in the beatnik revivalists the Washington Squares.

Though better known for the joyous perennial “Christmas Wrapping,” the teasing art-pop confection “I Know What Boys Like,” and the theme song to the new-wave sitcom “Square Pegs,” this Akron, Ohio-bred sextet reached their peak with this declaration of post-romantic bliss. A rocksteady beat, jaunty sax blurts and an out-of-nowhere harmonica solo buttress Patty Donahue’s adorably blasé delivery as she takes stock of all that she’s learned (the cost of stamps, the reason for a three-pronged outlet) and accomplished (fixing the toilet, acing her driver’s test) since her ex has been gone. Few pop kiss-offs have been funnier or more acerbic.

It’s easy to see why Joey Ramone took to Holly Beth Vincent. Her first and only (minor) hit, a snarling threat to the woman who’s taken up with her boyfriend, plays like a prelude to the Ramones’ “Beat on the Brat.” From the nursery-rhyme-simple verses to the indelible chorus to the Elvis Costello-esque bridge‚ it’s all finely calibrated by the producer Richard Gotterhrer, who also worked with Blondie and the Go-Go’s. Not only did her band open for the Ramones, but Vincent also duetted with Joey on a totally credible remake of Sonny and Cher’s “I Got You Babe.”

On her second album, released when she was just 17, this Midwestern squeaker and howler convincingly covers the Damned’s 1976 classic about the glory of the burgeoning British punk movement. Strangely, her version replaces the signature slashing opening riff, as she employs her Ronnie Spector-ish pipes to make the song all her own. Perhaps even stranger, after leaving the music business Sweet went on to write and produce TV sitcoms, including “2 Broke Girls” and “The Goldbergs.”

The brainchild of Pearl E. Gates, who earlier had performed with the theatrical rockers the Tubes, the Explosions managed a single major-label album of skinny-tied, rolled-up-blazer-sleeve goodness, featuring this super-catchy, quasi-punkabilly anthem that, if you squint, could be a bouncier X. After the band’s implosion, Harbor moved to England, added a u to her last name, recorded a retro-’60s solo album, and married the Clash bassist Paul Simonon.

A typical ’80s courtship — bored with one-night stands, the singer falls for someone who asks her to dance — lays the foundation for a song so tuneful it boasts two pre-choruses. Amanda Blue belts out this irresistibly glossy shoulda-been-a-hit with a keen attention to detail: listen to her hiccup on the second syllable of “mystery.” But the keyboardist Holly Knight, who wrote it with the drummer Anton Fig (later of David Letterman’s house band), was the New York group’s secret weapon. Among the smashes she helped write, “Better Be Good to Me” (from Spider’s second album) contributed to Tina Turner’s comeback, and in Animotion’s hands, “Obsession” became the ne plus ultra of pastel Patrick Nagel pop.

The ex-folkie Robin Lane, who led this Boston-based quintet (featuring two former members of the Modern Lovers), nixed new wave’s rampant playfulness for a darker, minor-key rapture. Her powerfully gruff vocals on this track, from their debut album, add just the right amount of melodrama to offset a sparkling melody reminiscent of the Kinks’ “Tired of Waiting for You.”

The Angeleno-by-way-of-Dallas Josie Cotton made a bit of noise in 1982 with the cheerfully provocative “Johnny Are You Queer?” Two years later, she issued this inventive update of an 11-year-old jazz-rock hit by Looking Glass, replacing the original’s plush, velvety vibe with a memorably haunting icy synth riff. As Cotton details a hardscrabble romance in a strong, if occasionally chirpy voice, the track is enlivened by guitar twang courtesy of Fleetwood Mac’s Lindsey Buckingham and ostentatiously busy additional percussion.

It’s not exactly underexposed — it’s been covered by the Foo Fighters and appears in a Grand Theft Auto game — but this track belongs on virtually any female-led playlist of the era by virtue of being one of the most ravishing pop songs in any genre. Gentle, breathy vocals by Barbara Gogan coast dreamily on waves of glistening guitar work by Clive Timperley, late of the London pub rockers the 101’ers, which also featured the Clash’s Joe Strummer. The song is reportedly about her crush on a Clash roadie who also acted and could be seen “Sitting in a corner in imperfect clothes/Trying not to pose for the cameras and the girls.” Also worth hearing or seeing on YouTube: Go Home Productions’ “Filmstar Rockin’,” which brilliantly mashes up this single with the Steve Miller Band’s “Rock’n Me.”

Here’s the song that finally answers the question: Can there be such a thing as too much cowbell? The percussion-heavy collective Pulsallama emerged from the downtown Manhattan’s Club 57 scene in cocktail dresses and wild wigs and for a time counted actress Ann Magnuson among their ranks. Their extraordinary art-damaged ode to suburban disturbance, with its hilariously off-key chorus, proves that one person’s “rhythmic adventurousness” could be another’s “unlistenable nonsense.” Over tooth-loosening bass and an oppressive steel drum, our narrator relates the lurid tale of her erratic husband, whom she discovers has been barking in their basement. Though the witch next door suggests he’s possessed, he’s later diagnosed with an incurable psychiatric disorder, leading to punchline so distasteful it’s bleeped out in most of the YouTube postings of the song.

Extolling the virtues of dial-up dalliances, Suzanne Fellini recorded perhaps the most relevant and practical of the songs for a quarantine playlist. “It’s so hard when I’m feeling on fire/and all I can hold is the telephone wire,” yelps the auteur as a hard-charging rock combo, featuring Sid McGinnis (also later of Letterman’s house band), create a ruckus around her. Toni Basil’s “Mickey” may have beat it by a year, but this insidiously hooky, aggressively silly earworm (which made it to No. 87 on the Billboard chart) is nearly as memorable.

Manhunt in Colorado After Remains of 3 People Are Found