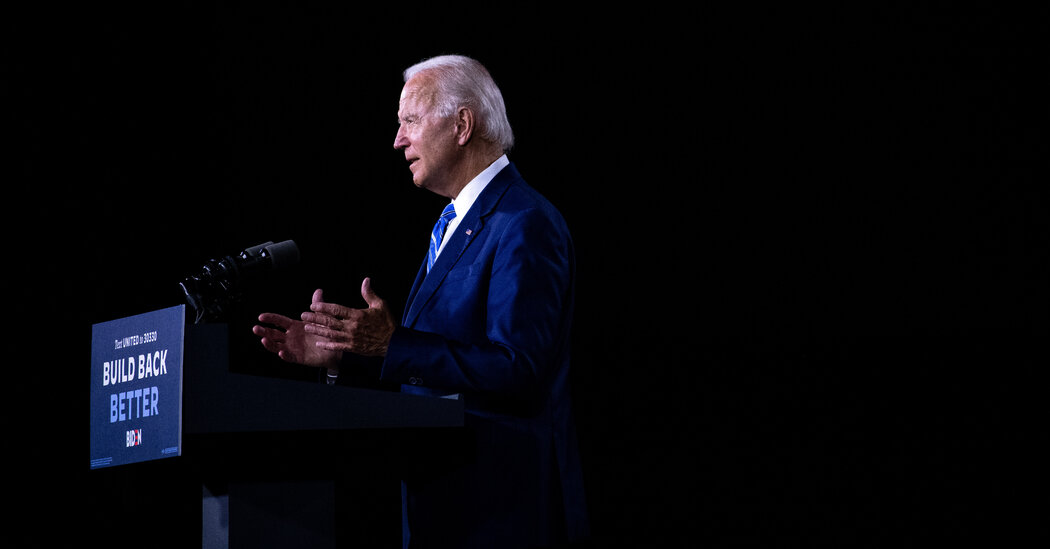 WASHINGTON — Joseph R. Biden Jr. could reverse President Trump’s ban on transgender people serving in the military within 30 days if he is elected president, according to a policy memo from an advocacy group.

The Palm Center, which has been fighting the ban since it was announced three years ago, says the Pentagon would not need to spend months studying how to allow transgender people to serve because it had already done so. The group argues that if the former vice president defeats Mr. Trump, the armed services could reopen to transgender people rapidly if ordered to do so.

The memo is based on two big “ifs” — first, that Mr. Biden wins the election in November, and second, that he then decides to overturn the ban.

But the discussion provides a look inside the thinking of progressive advocacy groups across the country, which are hoping a Biden presidency would undo a number of orders by Mr. Trump, much as he did after taking over from President Barack Obama.

“A big ship can take time to turn around, so often the Pentagon needs to study policy changes and move cautiously,” said Aaron Belkin, the director of the Palm Center. “But this is the rare case where, since the military left inclusive policy for already-serving transgender personnel in place even as it implemented its ban, the switch is just waiting to be flipped.”

The ban, which essentially ended an Obama administration initiative to allow transgender troops to serve openly in the military, has been one of the most fought over.

The Supreme Court has sent mixed messages on the issue of transgender people in the workplace. In January 2019, after a year and a half of litigation, the court granted the Trump administration’s request to allow it to ban most transgender people from serving in the military while cases challenging the policy made their way through various courts.

Still, advocates of equal rights for transgender people said the ruling may affect how lawyers argue the multiple lawsuits against the ban that are making their way through the courts. The decision may shift the legal standard needed to defend such a policy against constitutional claims of sex discrimination.

In July 2017, in a series of unexpected Twitter posts, Mr. Trump announced that “the United States Government will not accept or allow Transgender individuals to serve in any capacity in the U.S. Military.”

He said he issued the ban after consulting with senior officers and military experts, although his defense secretary at the time, Jim Mattis, was given only a day’s notice.

Three months later, a judge in the United States District Court for the District of Columbia temporarily blocked Mr. Trump’s ban and said the reasoning behind it was most likely unconstitutional because it represented a “disapproval of transgender people generally.”

Republicans, with an eye to keeping Trump’s support in Georgia, let his election dispute...

What About the Rest of the Constitution?

After Beirut Explosion, Funerals and Fury