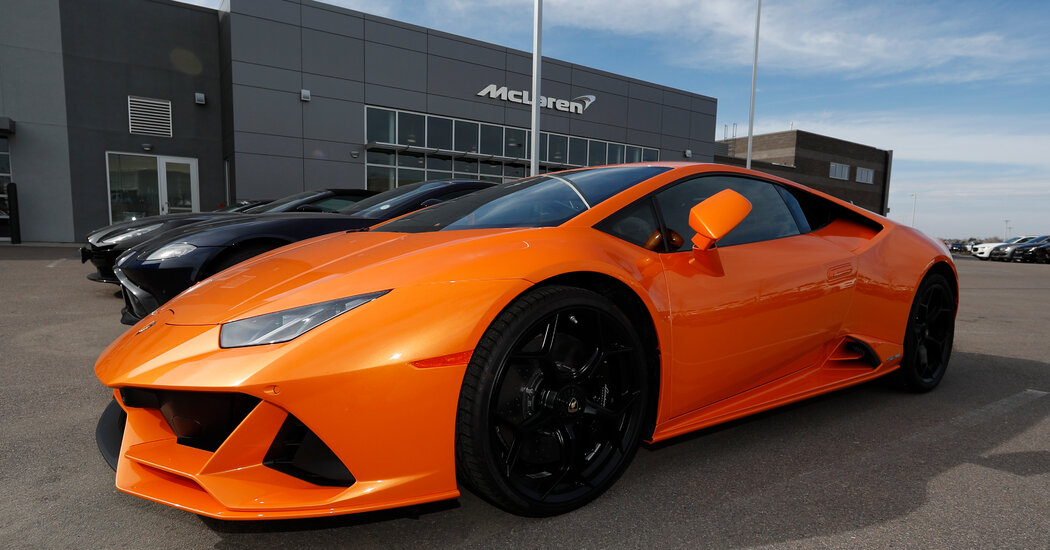 A man in Florida who received nearly $4 million in federal loans intended to help struggling businesses — and spent the money on a new Lamborghini Huracán sports car and other fraudulent purchases — was arrested and charged with three felonies, officials said on Monday.

David T. Hines, 29, of Miami, was charged with bank fraud, making a false statement to a lending institution and engaging in transactions in unlawful proceeds, according to prosecutors in the U.S. District Court for the Southern District of Florida. If convicted on all charges, he could face up to 70 years in prison, an official in the prosecutor’s office said.

In April, Mr. Hines joined scores of other business owners who are seeking financial help from the federal Paycheck Protection Program, a loan program created to help businesses keep their employees during the coronavirus pandemic.

On his applications, Mr. Hines said he operated four businesses with 70 employees and had $4 million in monthly expenses.

By the next month, Mr. Hines started receiving money from the loan program. He received three payments totaling $3,984,557, according to the authorities. As that money came in, Mr. Hines continued submitting requests for more funds. Eventually, his requests totaled $13,542,741, officials said.

What came next, based on a review of Mr. Hines’s financial records, was a spending spree that included luxury jewelry, expensive clothes, visits to resorts in Miami Beach and expenses on dating websites, officials said.

“There does not appear to be any business purpose for most, if not all, of these expenses,” Bryan Masmela, a U.S. postal inspector, wrote in an affidavit outlining more than a dozen of Mr. Hines’s payments from May to June.

Mr. Hines’s lawyer, Chad Piotrowski, said in a statement that his client was “a legitimate business owner who, like millions of Americans, suffered financially during the pandemic” and “is anxious to tell his side of the story when the time comes.”

Telephone messages left for Mr. Hines were not immediately returned as of Monday night.

The biggest purchase appears to have been made on May 18, when Mr. Hines bought a blue Lamborghini for $318,497 in North Miami Beach, officials said. He registered the vehicle under his name and that of one of his businesses.

Monthly expenses for Mr. Hines’s companies averaged around $200,000, far below what he claimed on his federal loan applications, the postal inspector said.

In fact, there was no record of Mr. Hines’s businesses — Unified Relocation Solutions LLC, Promaster Movers Inc., Cash In Holdings LLC and We-Pack Moving LLC — having “any operating websites,” according to the affidavit from the postal inspector.

Two of his businesses did have a history of complaints.

On the Better Business Bureau website, customers complained that two of Mr. Hines’s businesses conducted “bait-and-switch practices and other deceitful activities,” according to the affidavit. “Both businesses are F-rated businesses on the site.”

More Than 2,000 Black People Were Killed by White Mobs During Reconstruction, New Study...