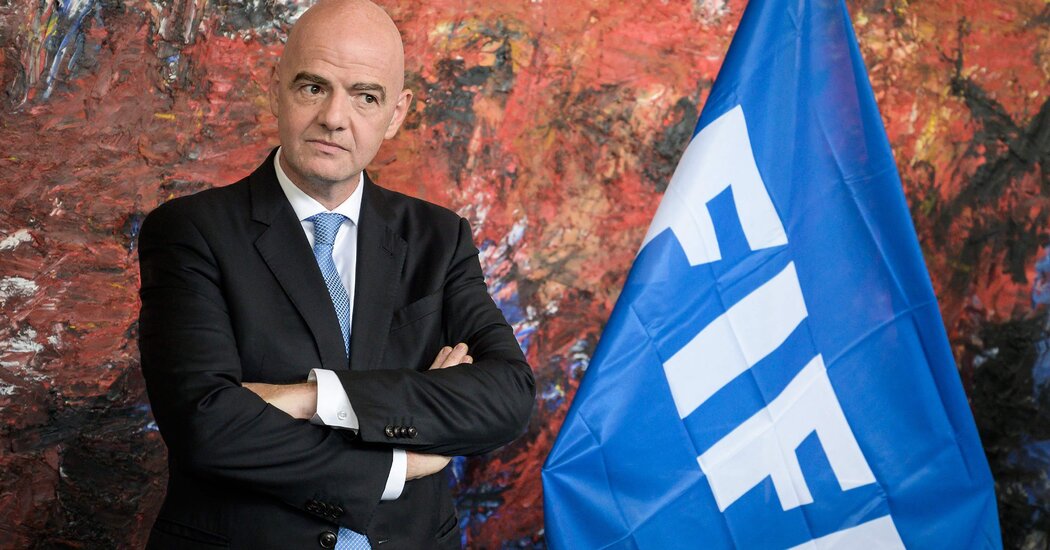 A federal prosecutor in Switzerland said on Thursday that he had opened a criminal investigation into Gianni Infantino, the president of FIFA, after concluding that there were “indications of criminal conduct” in meetings between Infantino and an official overseeing an investigation into soccer corruption.

The investigation follows the resignation last week of Switzerland’s attorney general, Michael Lauber, who stepped down after a federal court upheld allegations that he had lied about meeting with Infantino. Lauber had been overseeing an investigation of the 2015 corruption scandal that led to criminal indictments against some of the top leaders at FIFA, soccer’s Switzerland-based world governing body. The scandal led to the ouster of most of FIFA’s senior leadership, and paved the way for Infantino’s victory in a special presidential election a year later.

The federal prosecutor, Stefan Keller, announced the new investigation after reviewing two complaints made against Infantino, Lauber and Rinaldo Arnold, a regional prosecutor and a childhood friend of Infantino’s who had helped arrange meetings between the FIFA president and the attorney general. Arnold is also under investigation, Keller’s office said. Prosecutors called for Lauber’s immunity to be lifted so he could be investigated, too.

In a statement, Keller said the allegations in two new complaints against Infantino, Lauber and Arnold center on the abuse of public office, breach of official secrecy, assisting offenders and incitement to break the law.

The announcement is the latest legal complication for Infantino and Lauber, the attorney general, since details of their meetings emerged more than a year ago. They first came to light after a leak of emails by the Football Leaks platform, and became subject to more scrutiny when both men failed to remember what had been discussed at a meeting at a hotel in 2017, the third the pair had held in 15 months.

“On the basis of general life experience, such a case of collective amnesia is an aberration,” was the conclusion in the federal court ruling that largely upheld an earlier censure of Lauber.

Infantino has pushed back against the allegations, which have been the focus of intense news media interest in his native Switzerland and in Germany. In a statement on Thursday, Infantino pledged to continue to assist the Swiss investigations into FIFA.

“People remember well where FIFA was as an institution back in 2015, and how substantial judicial intervention was actually required to help restore the credibility of the organization,” Infantino said. “As president of FIFA, it has been my aim from Day One, and it remains my aim, to assist the authorities with investigating past wrongdoings at FIFA.”

But FIFA’s statement also pointedly rejected any implication of wrongdoing. “To meet with the Attorney General of Switzerland is perfectly legitimate and it’s perfectly legal,” Infantino said last week. “It’s no violation of anything.”

When he resigned, Lauber insisted he had been truthful at all times, but he said his position had become untenable. “The fact that I am not believed as the attorney general is detrimental to the federal prosecution office,” he said.

Keller, the federal prosecutor, was appointed in July after the receipt of anonymous criminal complaints that Infantino described as “quite absurd.”

The speed of the proceedings against Infantino is in stark contrast with the plodding pace of previous Swiss soccer investigations, including the one started after a 2014 complaint by FIFA about suspected money laundering in the 2018 and 2022 World Cup bidding campaigns.

Since then, a number of other cases have been opened, but none have concluded with a conviction. The only criminal trial, against a group of former German soccer officials, collapsed because it had surpassed a statute of limitations.

Lauber held a news conference after the details of the first two meetings with Infantino were revealed by Football Leaks. He claimed they were justified because of the longstanding investigation into the soccer body, though he recused himself from the FIFA case anyway. A third meeting came to light only after further revelations by the news media.

That disclosure prompted an inquiry into Lauber’s conduct by a supervisory body. In March, it punished him by cutting his salary by 8 percent. Lauber then hired the same lawyer as the former FIFA president Sepp Blatter, who is facing a separate criminal investigation, to mount an appeal.

That panel restored some of the salary reduction, but it also issued scathing comments about his conduct in its final ruling.

Lauber, the panel said, had “intentionally made a false statement” to the supervisory body “and knowingly concealed the third meeting with FIFA president Infantino.”

The investigation is a new blow for FIFA, which has tried to turn the corner on the corruption scandal by instituting governance reforms under Infantino.

Infantino, a former official at European soccer’s governing body, UEFA, has often claimed the days of cronyism and corruption are now behind the organization. But accusations of wrongdoing against senior officials have continued. A day after Infantino had told the FIFA Congress in Paris last year that the days of scandal were over, one of his vice presidents, the head of African soccer, was arrested and questioned by French financial prosecutors.

A separate FIFA ethics probe into the official, Ahmad Ahmad, has yet to come to a conclusion even though the case has been with its investigators for more than a year.

Michigan Democrats Hesitate on Whitmer as V.P.: ‘Selfishly, We Need Her Here’

Sachin Pilot says he is Congress` strongest warrior, will protect party at all costs

On a Pennsylvania Farm, ‘Nature Is Not Just Carrying On’