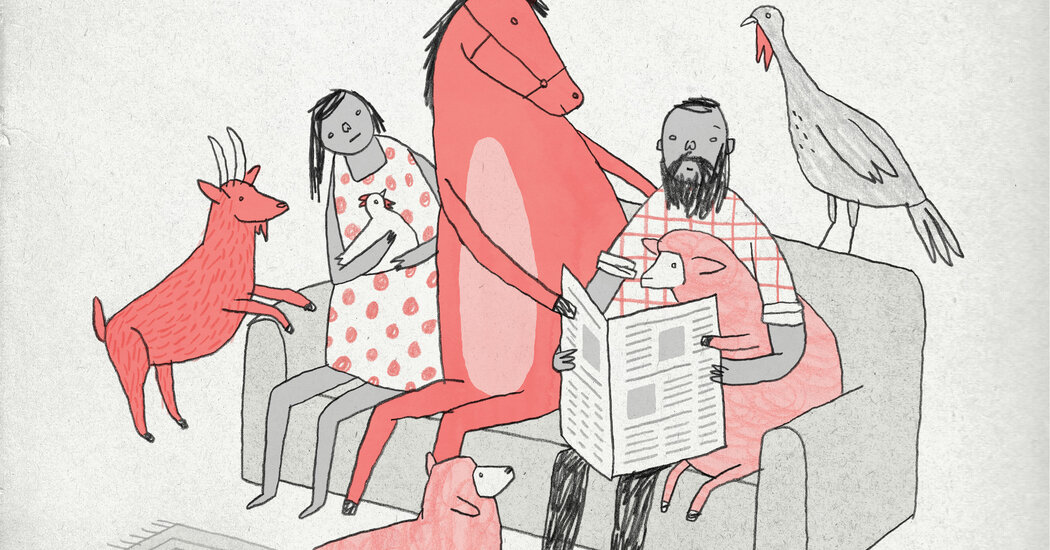 When it all went to hell, we adopted sheep.

We were standing in the shed, five years into our marriage, and I just wanted my husband to put the saddle on the rack. It wasn’t going well. First, James was not sure why I owned a saddle since I have never owned a horse. Second, when I barked out instructions — “Don’t step on the girth!” and “Do you see the martingale anywhere?” — he looked at me as if I had just ordered breakfast in Japanese.

I relieved him of the saddle, found its accessories and popped it onto its stand. “Jesus,” I said. “It’s not brain surgery.”

“You know I have only ever lived in a city,” he said. “I have no idea what you’re talking about half the time.”

After living in a (small) city for years, we had recently moved into my ancestral farm in rural Massachusetts. James is a professional brewer. What did he know about farms and animals?

Not much, it turned out.

In any marriage, there are moments when one looks at one’s spouse and thinks, “I don’t know you at all, do I?” Sometimes this is charming, a new facet to the jewel that is your beloved. In our case, I felt profoundly betrayed.

I knew James was not a farmer. Even so, he’s a stocky six-footer with a long gray beard and a perpetual jet-black ponytail who wears work boots and Carhartt. His hands are rough, his chest broad. He likes to take the doors off his Jeep. Everything about this man screamed ruggedness and hard work, and to me this will always mean that you know your way around farmland and animals.

[Sign up for Love Letter, our weekly email about Modern Love, weddings and relationships.]

My parents were not farmers in the beginning. They were frightened young parents who heard a clarion call to run for the hills. My mother met my father in 1970 in a prayer group organized by a group of born-again Christians, followers of a charismatic leader named Sam Fife, founder of a group called The Move.

Brother Sam’s message was simple: Western society was corrupt and disintegrating. Women and children did not know their place. Christians worldwide were being persecuted, and it was going to get much worse.

When I was an infant, we emigrated to Canada and worked our way north to a communal farm in northern British Columbia called Evergreen, which was off the Alaska Highway at the end of a dirt track deep in the woods. After an interminable, jolting drive, windrows of saskatoon bushes and blueberries announced the beginning of the farm, then a potato field, then the first glimpse of a long log house surrounded by white trailers.

I see it in my dreams. I was 7. Our first night in the Tabernacle, the central building where we prayed, attended school and cooked and ate our meals, a blonde-haired girl in a denim skirt hissed as she walked by me. “Just what we need,” she said. “Another city slicker.”

I soon learned that I had been paid the ultimate insult by this girl, and I would spend the next five years trying to prove her wrong.

The farm had been established by people who knew what they were doing, but by the time we arrived, it was populated with well-intentioned people like my parents, whose backgrounds in civil engineering and music were useful to the group but not especially relevant to feeding a family. The crops were thin, the animals thinner. We were trying to live as far away from society as possible, and this meant little food for people and even less for animals.

We children lived with our parents but spent our days in groups managed by other adults. One of my first shifts was in the cow barn where I was kicked into a pile of manure. I tried to regain my dignity by carrying two five-gallon buckets of milk up to the separator. The milk sloshed into my boots and my arms felt like they were tearing from my shoulders, but I made it.

The blonde, a year older, tanned and wiry, trotted up behind me with her two full pails, flashing me a nearly sincere smile.

The next day she put me on a horse, a stocky pinto mare, and told me I would be a true horsewoman when I had fallen off 100 times. I kept count. Falls 34 to 40 happened on one day. After each tumble, I limped over and dragged myself back onto the horse, my blonde nemesis watching astride the fence. I logged every fall, named the resulting scars on my knees, forehead and shins.

The farm was a hard place for the vulnerable. I struggled to be tough enough to survive not only accidents and falls but also sexual and physical abuse. I lost what little faith I ever had in God and focused on being physically strong, taking any dare, riding any horse. Whatever softness I had was reserved for animals, whose suffering I could alleviate in small ways.

I stole peanut butter from the buckets in the kitchen and fed a bear cub whose mother we had killed and eaten (the image of the mother bear haunts me to this day). I sneaked bread to the skinniest cows and mourned the death of each chicken, goat and dog. I wrote their eulogies on notebook paper and hid them in a coffee can.

We left Evergreen when I was 11 and returned, penniless, to Massachusetts. I was angry, traumatized, feral. I took jobs in stables and cow barns just to be near animals. My life began a slow, upward arc that finds me now volunteering for animal rescues and working at a historic farm.

Though I am a vegetarian, I came to it late and am moderate in my advocacy. The pledges I made to the carcasses of skinned goats I loved are faintly remembered. The blonde girl is now my friend on Facebook, and we don’t talk about Evergreen.

The killing of George Floyd during a worldwide pandemic, with children in cages and people disrespecting the sick and dying, sent me into a place I had not been since the darkest days of my youth.

The Massachusetts Society for the Prevention of Cruelty to Animals called to ask if we could take three skinny sheep at the historic farm I manage. I said no, worried that the staff and volunteers were already overstretched. That afternoon I paced around the house, made a donation to a civil rights advocacy group, read increasingly desperate pleas for justice online and added my voice to them.

My husband came home from the brewery that night exhausted and depressed. They had laid off their staff. He was running the canning line alongside the owner.

I told him about the sheep, about how helpless I felt.

“Tell me what we need to bring them here,” he said.

The next day he looked up “sheep shelter” on YouTube and began working on a hoop house, a temporary home for the sheep so we could take them immediately and begin work on a barn. They arrived the following week, three toothless, skinny old ewes.

A week after that I got a call about a young goat. We added him to the group, and within days, a small barn arrived on a flatbed truck. I threw all my fear, frustration and hope into pounding fence posts, hauling water, dispensing medication and ear scratches. James got up early to chop carrots and apples for them. He sang them songs and ordered bells from the Alps with their names engraved.

In June, the M.S.P.C.A. called again. A former carriage horse needed a retirement home. He was massive — 6 feet 2 at the shoulder — and needed to be placed with someone with “draft horse experience.”

I hung up and cried, thinking of all the big, tired, kind-eyed horses from my childhood, pulling plows and wagons and balers, dropping their massive heads so I could rub their sweaty necks. James didn’t skip a beat when I told him about the carriage horse.

“Tell me what we need to do,” he said, and we started building. James was dirty and grumpy — a city slicker trying to learn to manage all the complex human and animal needs that suddenly had become his responsibility.

The horse arrived a few days ago — skinny, a little wary, magnificent. We already had laid more than 100 fence posts and added five chickens and two turkeys. These animals will never mean to him what they mean to me — the fulfillment of dozens of tearful promises I made decades ago.

For him, this is the fulfillment of just one promise: to count my scars, to ask me how I got them and to love me as I am.

Six Months in the Life of a Locked-Down Theater