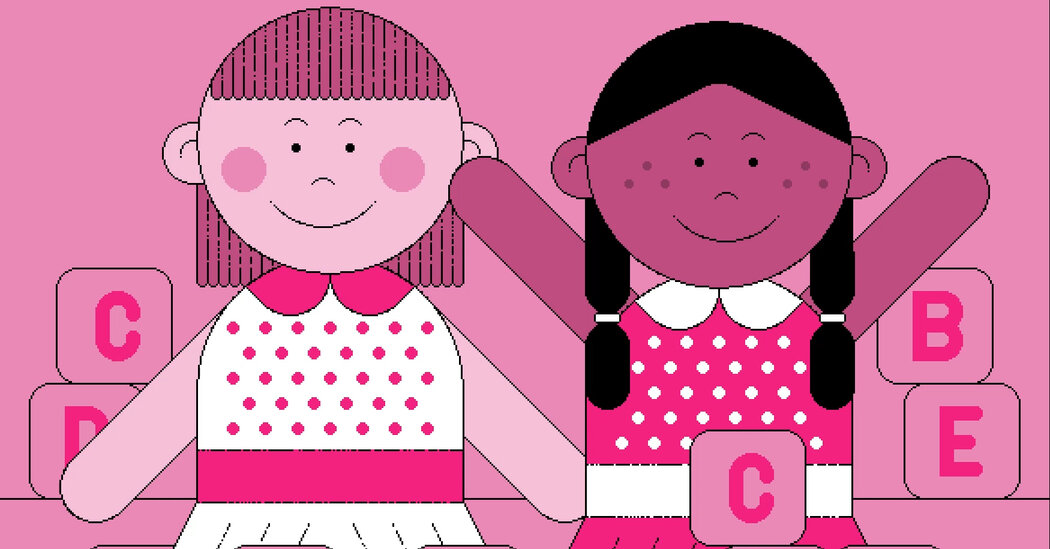 Becoming a mother made me reflect on my own childhood and how I was raised to view diversity. I grew up in South Georgia at a time when dolls of my complexion were not easy to find. So I played with mostly white dolls. The features I observed in Ken and Barbie were exactly what I saw around me: the familiar aspect of white people. My doctor was white. My teachers were mostly white. Police officers and bank tellers all had skin that did not look like my own.

My friends’ toy chests overflowed with white ballerina Barbies and blonde, pigtailed Cabbage Patch Kids. Their bookshelves were filled with stories about happy white children who spent their days gallivanting with big red dogs. As a Black child in the 1990s, I knew that my skin color was different, and I often wondered why I didn’t see more people who looked like me in my cartoon shows or books or reflected in my dolls.

Imagine how children’s views of themselves and others could change by having dolls of diverse races and ethnicities, not just white Barbies and G.I. Joes.

“Diversity through play is achieved by having a variety of toys, music, clothes, books, food, and art that highlight and celebrate similarities, as well as differences,” said Ann-Louise Lockhart, Psy.D., a pediatric psychologist and parent coach.

Research has shown children become aware of racial differences as early as 3 years old, and children often mimic their home life dynamics, classrooms and daily interactions with their toys. They “learn, interact, grow, and construct their understanding of their world through play,” Dr. Lockhart said. “They learn about social and family relationships through play, including how to relate to and interact with others.”

When encouraging diversity through play, parents and caregivers can explore activities and provide toys that help kids acknowledge differences and embrace similarities, and let them know that seeing color is OK. I select each doll and book for my 7-year-old daughter with intention. I want her toys to reflect the real world, in all its diverse glory. If you are a white parent of young children, ask yourself: How many of your children’s toys and books are multiracial? And for multicultural families and families of color, take note of how your children are being represented in action figures, dolls and other toys. Since diversity is not just about race, consider how your toy, game and book selections might also include people with nonconforming gender identities, different abilities, and a range of faiths and ages.

With more kids learning from home this school year, away from other children, and more awareness of systemic racism and injustice in the U.S., parents are becoming more conscious of how important teaching diversity is. Here are some other ways to diversify play in your child’s life.

By collecting dolls across the color spectrum, we help children create a self concept that acknowledges their own differences and helps them see that others are unique, too. Self concepts, Dr. Lockhart explained, are the statements we make about ourselves, which also include “the images and ideas we have in our mind about ourselves.”

“When children see themselves represented in their toys, books, movies, music, food, and artwork, it shapes their self concept” Dr. Lockhart said.

Yelitsa Jean-Charles, the founder and chief executive of Healthy Roots Dolls, said she created her doll company to represent today’s children. She said she was inspired by the 1940s Doll Test by the psychologists Kenneth B. and Mamie P. Clark. The researchers showed identical dolls, except for their skin color, to 253 Black children between the ages of 3 and 7 to test children’s racial perceptions. They found that the majority of children attributed positive characteristics to the white dolls and negative characteristics to the Black dolls. The findings suggested how Black children felt inferior and had lost their self esteem during a time of segregation, prejudice and discrimination.

With her toy company, Jean-Charles has normalized Black dolls. Jean-Charles said that between 20 to 40 percent of her customers are non-Black parents with children of color who specifically purchase her dolls to have conversations about diversity with their children or to have dolls that represent their children in complexion and hair texture.

“I created these dolls because I never had a doll that looked like me growing up,” Jean-Charles said.

In addition to dolls, parents can also include multicultural play figures by both small toy companies, like The Black Toy Store, and large toy manufactures, like Mattel or Lego Duplo.

Reflecting on my childhood, I can see how my imaginative play perpetuated a racial bias. In fantasy games, like playing “teacher” or “doctor,” I remember my white friends always holding a position of power; they were the teacher or the doctor. The Black students, myself included, played the role of the student or patient. As a parent now, I have had conversations with my daughter about this. I encourage her to be the leader in her imaginative play with friends.

Dr. Lockhart said that through play, children can experiment with their views of the world, then dismantle that world, build new worlds, and try them out again.

Even though children are limited in playing with others because of the pandemic, there are still ways to use games, puzzles and imaginative to promote diversity. One study suggested reading books that focus on diversity, equality and social justice and then acting out scenes, discussing with parents how kids would respond to certain situations. This allows children to put themselves in someone else’s shoes and practice empathy as well.

Role-playing can help create safe spaces of child-led conversations where your children feel comfortable to ask questions and explore topics about race and culture.

“To create space for our children to have conversations related to race and diversity, we have to be willing to do our own work so that we can come to the conversation comfortable enough to hold whatever our children bring,” said Kira Hudson Banks, Ph.D, a psychologist and educator of more than 20 years.

“We have to also be willing to trust the intelligence of our children. We know they understand the dynamics of oppression by preschool and they start to judge by race, then it is incumbent upon us to realize that they are capable of starting to understand and interrupt some of those stereotypes.”

With drawing or painting, parents can incorporate examples and materials from artists with backgrounds different from their own. Introduce artists who use bright and intentional colors or work for social causes. Consider the artists Kehinde Wiley and Amy Sherald, who were commissioned to create portraits of former President Barack Obama and first lady Michelle Obama for the National Portrait Gallery. Or show work from Vik Muniz, a mixed-media artist from Brazil, who creates art from everyday materials. His photographs can prompt conversations about recycling as well as what it was like growing up in Brazil, which challenged his views on waste in America. Children can then design their own artistic pieces having been inspired by a more diverse art world.

Dance is another way to introduce diversity into home-based playtime and learning. Caregivers can show videos of dancers, like Misty Copeland and Michaela DePrince. Or play music from different parts of the world. Have fun with this: Spin a globe, pick a location and look up children’s music for that particular region. If you can, carve out 20 minutes of dance each day with your children and discuss what you like about the music you are dancing to.

Learning a few key words of another language can assist in language barriers between children. It could be as simple as teaching one word, like “hello,” in multiple languages. Word flash cards with pictures in English and a second language can be a fun way to incorporate learning a new language into play time. For children, apps like Duolingo and Mango, is an interactive way to expand the knowledge of basic linguistics for communication.

Patricia Nunley, Ed.D., a professor for early childhood development at the City College of San Francisco, urges parents to move with caution here. “Language is directly tied to culture.” she said. “Parents must group language in with other concepts of learning to properly utilize it. Children have to find the appreciation of culture before truly appreciating another language.”

For example, if I teach my daughter to say “hello” in Japanese, or “Kon-ni-chi-wa,” but I neglect to explain to her the formal greetings of bowing, showing respect to elders, or the etiquette of greeting, I am not fully connecting the Japanese culture to the word.

Diversity is more than speaking another language or teaching about other races. It includes, but is not limited to, gender identity, individuals with disabilities and people of different faiths. Age also plays a major role in how we teach our children.

As parents, we must make a conscious effort to explore playtime in a way that does not only reflect our family dynamic but positively reflects our melting pot of cultures around the world. We must uplift the voices of those who do not share our complexion.

The process of diversifying play should not feel stressful. Parents should enjoy learning alongside children. Children should feel dignified and honored during the process of learning diversity. They should be empowered and know that seeing color is OK. In acknowledging our differences, we learn to embrace our similarities.

Shanicia Boswell is the founder of Black Moms Blog, a collaborative blogging community that focuses on parenting, culture, and lifestyle from a Black mom’s point of view. Her views on parenting have been featured on OWN network, HLN/CNN, Thrive, March of Dimes and Procter & Gamble.

Indian Army says committed to protect territorial integrity and sovereignty of the nation after...

Good news for job seekers as UP CM Yogi Adityanath orders to fill over...