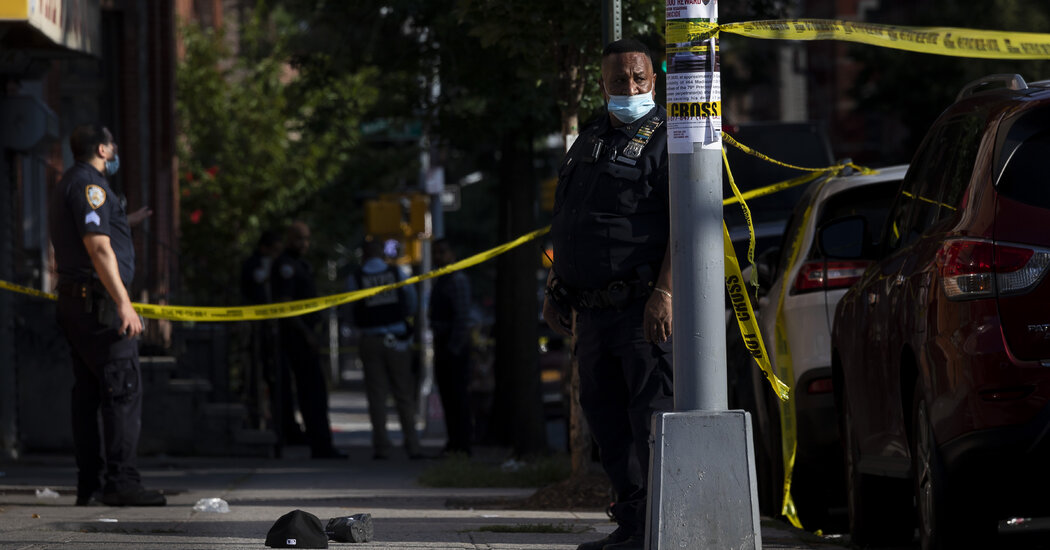 In the past few weeks, Mayor Bill de Blasio and his police commissioner, Dermot F. Shea, have blamed the steep rise in shootings in New York City on a breakdown in the criminal justice system that they contend has allowed criminals back out on the streets.

The mayor and commissioner have cited a range of causes that they have portrayed as outside their control: the pandemic and the George Floyd protests, as well as measures approved by the State Legislature, including one that eliminated cash bail for many defendants.

But a confidential analysis of police data, conducted by city officials but not released to the public, offers little if any evidence to back up their claims. In fact, the analysis, obtained by The New York Times, suggests the state’s new bail law and the mass release of inmates from city jails in recent months because of the coronavirus outbreak played almost no role in the spike in shootings.

Of the 1,500 inmates let out of Rikers from March 16 to April 30, only seven had been rearrested on a weapons charge by mid-July, according to the confidential analysis.

Nearly 2,000 people who in July had open gun cases were allowed to go home to await trial, but only about 40 of those defendants were arrested on another weapons charge while they were out, the analysis said.

Instead, the analysis points to a different possible reason for the wave of shootings: The number of arrests for gun crimes has plummeted.

While murders and shootings have surged, reports of other major crimes have actually fallen in recent months. Still, the spike in gun violence has stirred deep fears that the city might be sliding back to an era of random violence on the streets. Recent shooting victims have included a two teenagers going to play basketball and a baby boy.

New York City is not alone. Shootings have skyrocketed in major cities across the country, and that surge has led to intense political fights over whether efforts to rein in the police, including the Defund the Police movement touched off by the killing of George Floyd, are playing a role.

On Sunday, another 19 people were shot in New York City, one fatally. Through the first seven months of this year, shootings were up 72 percent over the same period last year and murders rose 30 percent, even as reports of other violent crimes like rape, assault and robbery fell.

The police say feuds between street gangs are behind most of the incidents, and so far detectives have been unable to make enough arrests to stop reprisals. The pandemic and the need to divert investigators to cover widespread protests have set back investigations, police officials said.

In recent days, Mr. de Blasio has been particularly critical of the courts, saying that the lack of trials because of the pandemic and the inability of prosecutors to push cases forward with indictments were “a huge piece” of the spike in violent crime.

“The bottom line is our criminal justice system needs to get back to full strength,” Mr. de Blasio said. “Our courts not only need to reopen, they need to reopen as fully and as quickly as possible.”

But prosecutors, court officials and defense lawyers have pushed back against that theory.

Lawrence Marks, the state’s chief administrative judge, told the NY 1 cable news station that the mayor’s attacks on the courts were “false, misleading and irresponsible.”

Judge Marks countered that the rise in violent crime was more likely a result of the sharp drop in gun arrests in recent months, a position that the department’s own data seems to buttress.

The confidential analysis that was obtained by The Times was prepared by city officials with Police Department data and shared with the city’s district attorneys’ offices. It was provided to The Times by an official who wanted to counter the mayor’s narrative, but wished to remain anonymous because the report was not intended to be released.

Asked about the analysis, Bill Neidhardt, a spokesman for Mr. de Blasio, maintained the mayor has always blamed the rise in violence on “a perfect storm” of causes, including the pandemic’s devastating effects on the city’s economy and daily life.

“He also talks about how a non-fully functioning criminal justice system is playing a role in this as well,” Mr. Neidhardt said.

But the city’s own analysis suggests the bail law, which allows many defendants accused of nonviolent crimes to be released before trial without posting bail, had little to do with the rise in violence. It notes that shooting incidents stayed relatively stable for more than four months after the legislation was passed.

The analysis also indicates that the courts are processing gun crimes at close to the same rate as before the pandemic. According to the Police Department’s data, there were 2,181 unresolved gun cases in July — slightly fewer than the 2,285 gun cases that were open in December 2019.

“The way we are processing arrests has not changed at all,” said Cyrus R. Vance, Jr., the Manhattan district attorney. “In May, the volume and severity of the arrests we were handling was the same as it was in January. We’re open.”

Darcel D. Clark, the Bronx district attorney, said that her office’s complaint room, where new crimes are charged, was “running at full strength” — albeit virtually.

“It is wrong to say that the district attorneys are not prosecuting or that the court system is not functioning,” Ms. Clark said.

Court records in Brooklyn, which has seen some of the worst gun violence in recent weeks, suggest there is little sign that the release of people from jail was driving most of the shootings there.

From June 15 to July 15, according to court records, the Brooklyn district attorney’s office opened a total of five prosecutions of defendants for shootings or for homicides with guns.

Still, Michael LiPetri, the Police Department’s chief of crime control strategies, said that the virus’s effects on the criminal justice system were being felt on the streets.

Early in the pandemic, Chief LiPetri said, many suspects arrested on gun charges who in the past would have been asked to post bail were instead released without bail to stem the spread of disease in jail.

The large number of people being sent home to await trial, even with a serious gun charge, he said, had created a permissive atmosphere, especially among gang members who the police believe are driving the wave of shootings.

“When people get arrested and then get out, their crew members start feeling comfortable carrying firearms,” he said.

Chief LiPetri acknowledged the number of gun arrests had dropped off, saying that the force was stretched thin because of the pandemic and the need to redeploy people to cover protests.

In the past month, he said, the department has started moving robbery detectives to work on violent crime and has shifted more than 300 officers in administrative positions to precincts with high numbers of shootings.