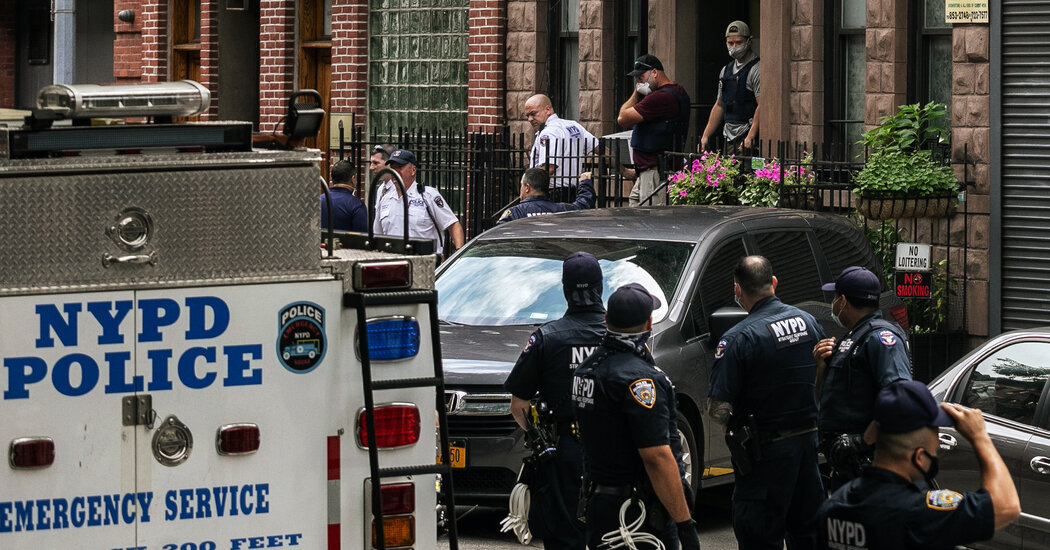 Derrick Ingram, a Black Lives Matter organizer, was besieged inside his Manhattan apartment on Friday while a police helicopter patrolled overhead, officers banged on his door and police dogs growled in the hallway.

The street outside had been closed off by roughly two dozen police vehicles and dozens of officers, including some who were wearing riot gear. At the end of the block, Black Lives Matter supporters had gathered with bullhorns and cameras to protest what appeared to be Mr. Ingram’s imminent arrest.

“What did I do? What did I do?” he said on a livestream posted on Instagram. “I was born Black, that’s what I did.”

The tense standoff in the Hell’s Kitchen neighborhood continued for several hours as Mr. Ingram, 28, talked to lawyers via Zoom and communicated with the outside world over the Instagram video. He declined to let the officers enter his apartment without a warrant.

In the end, the officers left shortly after 1 p.m. without arresting Mr. Ingram. But the tremendous show of force renewed questions about how the Police Department is addressing the protests for racial justice that have continued in New York for weeks and how they are dealing with those who participate in them.

The episode came about 10 days after the arrest of a transgender woman, Nikki Stone, 18, who was taken away from a protest in an unmarked van in a move that drew criticism from Mayor Bill de Blasio and Gov. Andrew M. Cuomo.

In that instance, Mr. de Blasio suggested the arrest had been justified, but he criticized its execution, saying police leaders should have handled it differently given continuing tensions over the department’s practices.

A police spokeswoman said the officers were there to arrest Mr. Ingram for an assault on an officer. She did not offer details about the assault and said the investigation was continuing.

PM Narendra Modi says fight against COVID-19 far from over, asks CMs to get...