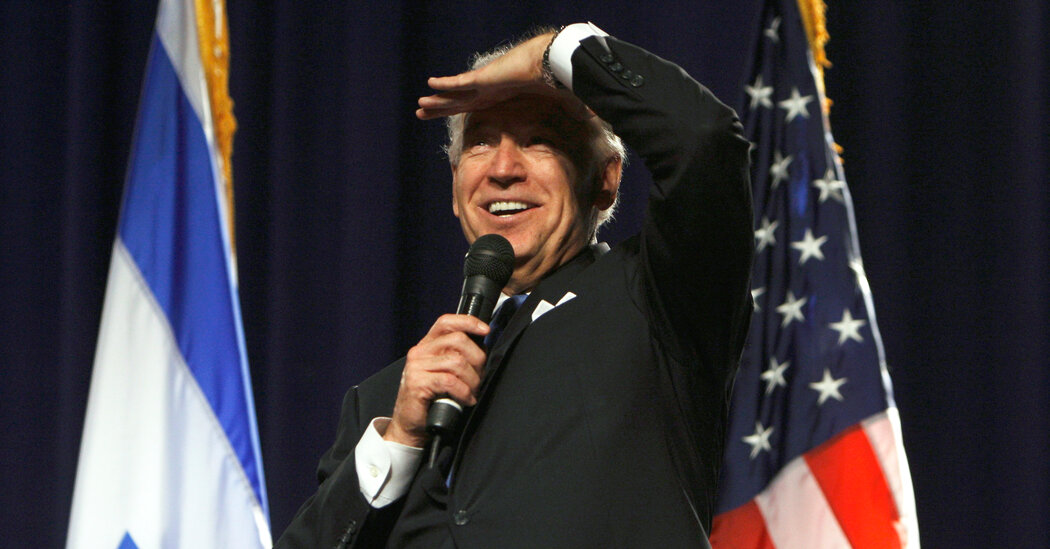 TEL AVIV — In the pile of old notebooks I saved from when I was covering American politics for an Israeli newspaper (and when reporters still used a pad and pen), I found five mentions of Joe Biden’s Israel story.

Most of them are from 2008 — first during the Democratic primary, when Mr. Biden was running against Barack Obama, and then the general election, when Mr. Biden was running alongside Mr. Obama. I was covering that election for the Tel Aviv-based Haaretz, and every mention of Israel was of interest to me. Mr. Biden told the same story at least five times: Whenever he needed to emphasize his long-term commitment to Israel’s safety, it’s what he turned to most often.

The story goes like this. Mr. Biden starts by saying that he’s known “every Israeli prime minister since Golda Meir.” Then he shares a few anecdotes about their meeting in 1973. Usually, he relays how Meir told him that Israel had a “secret weapon.” Expecting it to be bombs or ammunition, Mr. Biden waits for the prime minister to finish. But then Meir tells him: “Our secret weapon, senator, is we have no place else to go.” It usually got applause.

The last mention I can find of the Golda Meir story is from an event in April 2015. It began with the following statement: “My name is Joe Biden, and everybody knows I love Israel.”

My instinct is to suspect any politician who uses such grandiose phrases, but the truth is, I don’t think Mr. Biden’s feelings about Israel are just well-rehearsed crowd pleasers. When I asked Israeli officials who know Mr. Biden, I was told that his sentiment was genuine. One very senior Israeli official, who has known Mr. Biden for many years, told me last week that from an Israeli perspective, he is the ideal Democratic candidate.

The United States is Israel’s main ally in a difficult world. The relationship is a major part of Israel’s national security strategy. Without the backing of the United States, Israel looks weaker — and in the Middle East, weaker countries are the prey of stronger countries.

Israelis could be extra worried about the coming election because we fear losing President Trump. For many reasons, he is seen by Israelis as one of the friendliest leaders in the history of the United States-Israel alliance. Israel is one of few countries in the world in which the president is highly popular: A whopping 56 percent of Israelis prefer Mr. Trump in the upcoming election, compared to 16 percent who support Mr. Biden.

As far as Israelis are concerned, Mr. Biden has two disadvantages. He is not Mr. Trump, and he is a Democrat. In other words, he is not the candidate they support and he comes from the party many of them distrust. In recent years, there’s been a steady drift of Democratic voters — and some Democratic politicians — away from Israel. They are more likely to say that the United States should be an impartial broker in the Middle East, rather than take Israel’s side — and they tended to oppose recognizing Jerusalem as Israel’s capital. So it’s not unjustified for Israelis to worry.

Israelis have a lot of questions for Mr. Biden. Would his administration allow Israel to use military force against Hamas, Hezbollah or Iranian forces in Syria? (The Obama administration once suspended a shipment of Hellfire missiles to Israel because it was displeased with Israel’s use of force in Gaza.) Will he restore the Iran nuclear deal, as he says he intends to? Will he pressure Israel to evacuate settlements as the Palestinians want and as more Democratic voters demand?

Of course, it would be foolish to predict the exact policies of a Biden administration in the Middle East. But there is history to consider. Mr. Biden is hardly a newcomer, after all.

He was vice president to Mr. Obama, a leader Israelis remember as a troublemaker. And Mr. Biden battled over West Bank settlements with Israeli prime ministers from Menachem Begin to Benjamin Netanyahu. But he also befriended Israeli leaders, from Shimon Peres to, again, Mr. Netanyahu. “Bibi, I don’t agree with a damn thing you say, but I love you,” Mr. Biden said in 2012. His love will surely grow even more, if and when the prediction Mr. Netanyahu made more than a quarter century ago — that Mr. Biden would one day be president — becomes a reality.

Mr. Biden understands Israel’s concerns. He understands the need to use force. In my notebooks, I found a reference to the April 2007 Democratic primary debate, in which he lectured two of his rivals. “Let’s stop all this happy talk here about the use of force doesn’t make sense,” he said. “You guys can have your happy talk, there’s real life.” His patience with hostile governments is limited. His direct manner and pragmatic tendencies make him someone Israelis appreciate and find easy to work with.

My country also hopes that Mr. Biden could provide an opportunity for Israel to re-emerge as a truly bipartisan cause in America. Mr. Biden is a self-defined Zionist and a longtime supporter of Israel familiar with both the issues and the main players, who instinctively understands of the country’s security concerns. Sure, pressures from within the party could be a problem. Sure, there would be thorny disagreements to surmount if he becomes the next president.

But from an Israeli perspective, Mr. Biden is as good as it gets — for a Democrat.