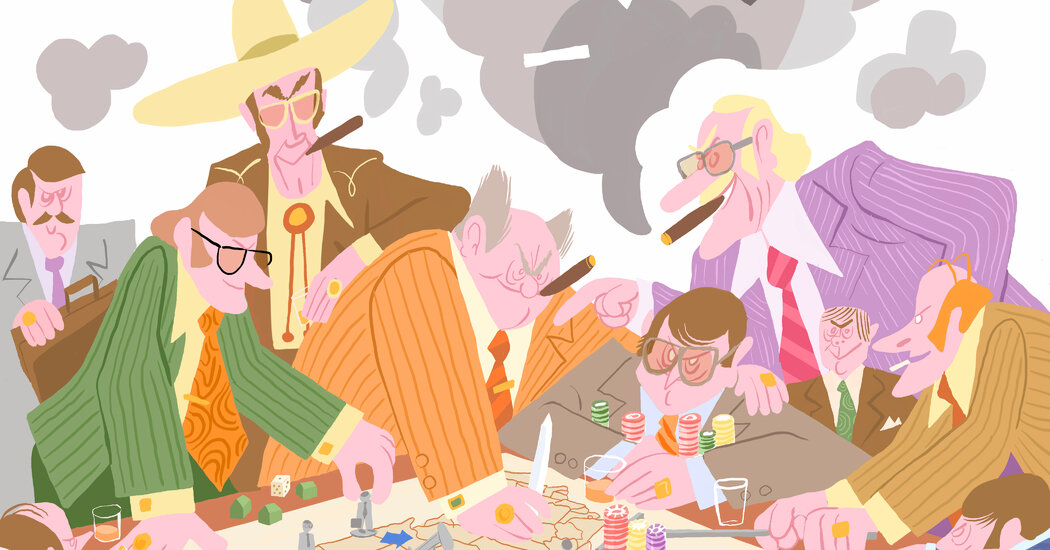 EVIL GENIUSES
The Unmaking of America: A Recent History
By Kurt Andersen

It used to be called the New World. Now it’s run by a man who wants to make it great “again.”

Sometime between then and now, the writer Kurt Andersen argues in his essential, absorbing, infuriating, full-of-facts-you-didn’t-know, saxophonely written new book, America lost one of its “defining” traits: “openness to the new,” its gee-whiz tendency to “try the untried and explore the uncharted,” its “innovative, novelty-seeking, risk-taking attitudes,” its “new conceptions of freedom and fairness and self-government and national identity” — built, it must be said, atop tyrannies new and old.

Andersen traces this “cultural U-turn” to the 1970s. (Reading this book will disabuse you of any notion that hair was the biggest problem of that era.) In those years, Andersen writes, America swerved away from the new on two distinct but intersecting levels. In culture, it fell into a “mass nostalgia” that became a “cultural listlessness,” a slowing of the rate at which life looked, felt and sounded new — Americans from the 1950s and 1970s appearing as if from different planets, but Americans from the 2000s and today looking not all that dissimilar. Meanwhile, in political economy, America was hijacked by capital supremacists, who preached and enacted, as Andersen details with wallets-full of receipts, a return to a pre-New Deal order: “everybody for themselves, everything’s for sale, greed is good, the rich get richer, buyer beware, unfairness can’t be helped, nothing but thoughts and prayers for the losers.”

To begin with the conclusion of “Evil Geniuses,” Andersen, the author of several books and an accomplished magazine editor and radio host, argues that this double reversion threatens the endurance of the country he has long chronicled. America, he says, risks being “the first large modern society to go from fully developed to failing.” In an illustration of his gift for connection-making and framing, he suggests that what could save the country “is a transformative pivot almost as radical for us as the one China made” when it abandoned Communism for capitalism, while, Andersen notes for our benefit, more or less preserving the chassis of its political system.

[ Read an excerpt from “Evil Genuises.” ]

Starting here at the end is one way of revealing the immensity of Andersen’s project, which is to explain everything that went wrong. Andersen sets out to narrate a complex, many-layered history of how a band of rich people, corporate executives and political right-wingers, aided and abetted by gullible “useful idiots” in the media and the political left, transformed the nation into a casino where only they ever win.

Now, this is one of those situations where the book is better than the review, so you should read it, but let me give you a sense of the many dimensions of the hijacking Andersen details. He makes a definitive, exhaustive and only very occasionally exhausting case that life changed profoundly in America starting in the 1970s and well into the 1980s, in ways that trap us still.

Thanks to a series of secret and not-secret memos, corporate America got organized to pursue political power in a way it hadn’t before. Through policy changes like corporate and high-earner tax cuts, society was reorganized. Just as important — Andersen is very useful here — the rising capital supremacists ruled through “countless nuts-and-bolts changes so dweeby and tedious, and so often bipartisan, that they appeared inconsequential and were uncontroversial,” as well as by even stealthier “screwing-by-inaction” or “malign neglect,” changing things by letting things expire, failing to index things. Year by year, continuing into the present, through these policy changes explicit and subtle, American life was turned upside down — in a way that many people seemed not to realize. Pensions were gutted. The minimum wage was effectively slashed. Companies started spending much more money buying back their own stock than on research and development. Wall Street took over the management of companies. Antitrust enforcement largely disappeared. An app-guided, app-stiffed servant class was born.

The rich and the right correctly understood what they were seeking as a cultural project with economic benefits. They acted accordingly. In territory that has already been reported by Jane Mayer, in her must-read-if-you-care-about-your-country-even-just-a-little book “Dark Money,” they reserved a fraction of the spoils of widening economic inequality to invest in the yanking open of political inequality, so as to widen the economic inequality yet further. Obviously, this meant political giving. But it also meant funding universities, think tanks and nonprofits. It meant ensuring that cause-boosting thinkers like Charles Murray were well tended. It meant developing new academic fields like “law and economics” and new campus organizations like the Federalist Society. It meant buying up media so that the capital-supremacist viewpoint could reach ordinary people through Fox News and elites through The Wall Street Journal.

Rigging pays. Members of the Koch family are, Andersen reports, 20 times richer than they were 40 years ago (maybe you’re the same way). And the wealthiest 1 percent of American households have gained $12 million on average since the 1980s (maybe same with you).

Now, Mayer and others — Robert Reich, George Packer, Jacob S. Hacker — have told versions of this story before. And at first, while reading “Evil Geniuses,” that annoyed me. Until I understood what this book really is: Andersen’s retrospective on the bigger themes and trend lines and power grabs that he, and so many others, missed, even as he was writing magazine stories about the people and institutions in question. The book is an intellectual double take, a rereporting of the great neoliberal conquest, by a writer who kicks himself for missing it at the time.

At one point, he says, revealingly, that he admires Elizabeth Warren “because I identify with her middle-aged illumination concerning the political economy.” Warren was famously a Republican until she became a vocal progressive. Andersen also seems to see himself in Walter Lippmann, the early-20th-century writer who was “pragmatic, in many ways conservative, in no way a utopian,” but came, through reporting, to plead with gusto for social reform.

Andersen’s sense of culpability and his permeability to new facts give his book its particular power. It is a radicalized moderate’s moderate case for radical change. Andersen is unambiguous about where America needs to go; he is honest about what it took to get him to his current views; and he writes not as a haranguer who presumes you’re with him but as a journalist who presumes you’re not, that you might even think as he once did. So, carefully, meticulously, overwhelmingly, he argues through facts.

And with his own complicity in mind, one place Andersen does break some new ground is in the portrayal of the shameful liberal complicity that was essential to the long plutocratic hijacking. For someone of my age, gray but elder-millennial, for whom polarization has been the oxygen in the air, it is head-spinning to be reminded how much of the nation’s turn to the right and to the rich the Democrats enabled. The Democrat-controlled House voted to cut taxes on the richest Americans, to a rate lower than at any time in the previous half century. Ronald Reagan couldn’t do it without them and, in the Senate, one Joe Biden voted for the cuts, too. As the tide turned against antitrust regulation, writers in The New York Times (oh yeah, this newspaper) and Newsweek cheered. When Gary Hart sought the Democratic nomination for president for the second time in 1988, he actually enlisted as a tax policy adviser Arthur Laffer, the clownish economist who invented the hokum of supply-side economics (and who once asked me, before a television debate, if “the Indians” still brush teeth with twigs).

Voting for cable deregulation? Hiring Goldman Sachs bankers as advisers? Praising Charles Murray’s advocacy of punishing mothers on welfare? Each time, Democrats were #OnIt. With Democrats like these, do we even need a second party representing the plutes?

As he makes this wide-ranging case, Andersen never loses the texture of actual human beings. He flies his plane over vast territory, but he flies at low altitude so you’re always able to see real people sowing this future, going down these roads. He is a graceful, authoritative guide, and he has a Writer-with-a-capital-W’s ability to defamiliarize the known. He also isn’t afraid to play around. He even manages to work in the word “wankerish,” on Page 69 — nice.

“Evil Geniuses” is not a perfect book. At certain moments, more than a few times, there is a broad-brush characterization of the American spirit or temperament or enjoyment of liberty that clearly did not apply to Black Americans, a caveat Andersen omits. (“Almost anybody was unusually free to give any business (or religion) a go”; “Ours was a nation built from scratch meant to embody the best Enlightenment principles and habits of mind.”) It is also a long book that occasionally loops back on itself. And, to my taste at least, it didn’t need the brief history of Covid at the end. I like my books like I like my exes: at a remove from my current situation.

As he works his way to the end, Andersen actually does the thing I once told my editor I would do and then just didn’t: propose solutions on the heels of his criticisms. Some are basic, unoriginal to him: stronger unions, a universal basic income. But there is a more foundational piece of advice he offers the political left at this moment, and I would like it if everyone who so identifies would hear this:

At this moment of five intersecting crises — health, economic, racial, democratic and climatic — things can feel hopeless. The rich and the right did it. We all live in their world now, and while in their world it keeps getting warmer the consolation is you should avoid the outdoors anyway, because the defunding and defanging and delegitimizing of government has left the virus rampaging.

Into this depressing thought Andersen jumps. Do not despair, for the hijacking that got us here is evidence of what is possible today: “If you need proof that ideas have power and that radical change is possible, it’s there in the rearview mirror. Evil genius is genius nonetheless. In the early 1970s, at the zenith of liberal-left influence, an improbable, quixotic, out-of-power economic right — intellectuals, capitalists, politicians — launched their crusade and then kept at it tenaciously. The unthinkable became the inevitable in a single decade. They envisioned a new American trajectory, then popularized and arranged it with remarkable success.”

Andersen argues that this moment of crisis on multiple vectors is precisely the kind of hour known through history to occasion great change. But only if those who seek change know how to play the game. He offers the left two pieces of counsel of particular note: to focus relentlessly on the amassing of power, the building of institutions, networks, societies, associations — the long game. And to embrace the power of evil genius. He says the mainstream left has been too nice, too nonideological, too pragmatic, too nuanced. Winning back America as a country that works for Americans will be the battle of a generation, and this book raises the question of whether the left should seek to achieve that country by embracing the cabalistic power-building, linguistic cunning, intellectual patronage and media stewardship the right has employed.

“For Americans now, will surviving a year (or more) of radical uncertainty help persuade a majority to make radical changes in our political economy to reduce their chronic economic uncertainty and insecurity?” Andersen writes. Or, he wonders, “will Americans remain hunkered forever, as confused and anxious and paralyzed as we were before 2020, descend into digital feudalism, forgo a renaissance and retreat into cocoons of comfortable cultural stasis providing the illusion that nothing much is changing or ever can change?”