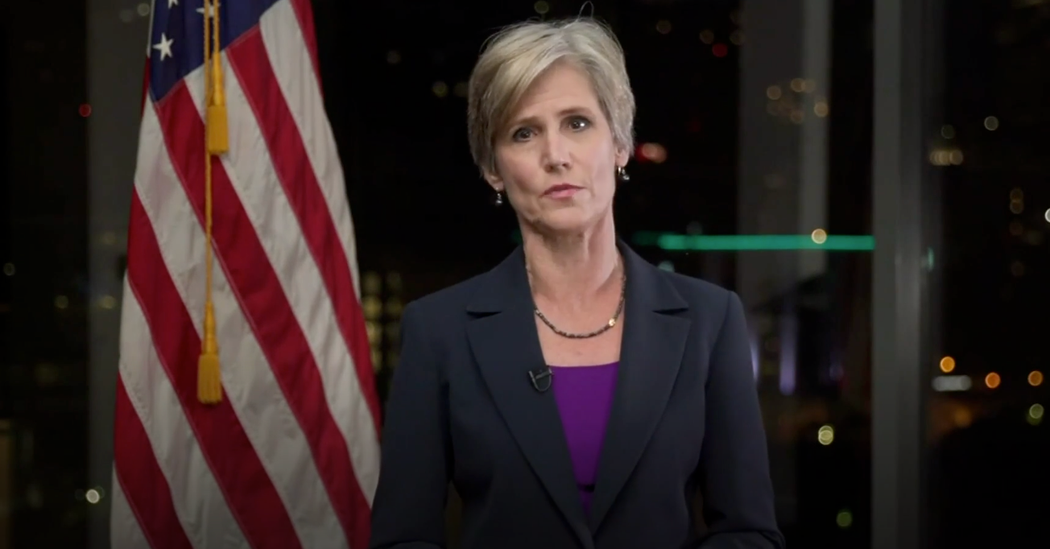 new video loaded: ‘The Future of Our Democracy Is at Stake,’ Sally Yates Says

‘The Future of Our Democracy Is at Stake,’ Sally Yates Says

Sally Yates, a former acting attorney general, spoke to the Democratic National Convention about the flaws she sees in President Trump while endorsing Joe Biden.

Speaking at a political convention is something I never expected to be doing, but the future of our democracy is at stake. I’m here in my hometown of Atlanta, where as a young lawyer I joined our nation’s Justice Department. For nearly 30 years, through Democratic and Republican administrations, I worked alongside my D.O.J. colleagues to advance our nation’s promise of equal justice. But from the moment President Trump took office, he’s used his position to benefit himself rather than our country. He’s trampled the rule of law, trying to weaponize our Justice Department to attack his enemies and protect his friends. Rather than standing up to Vladimir Putin, he fawns over a dictator who is still trying to interfere in our elections. He’s even trying to sabotage our Postal Service, to keep people from being able to vote. His constant attacks on the F.B.I., the free press, inspectors general, federal judges, they all have one purpose: to remove any check on his abuse of power. Put simply, he treats our country like it’s his family business — this time, bankrupting our nation’s moral authority at home and abroad. But our country doesn’t belong to him. It belongs to all of us. Joe Biden embraces that. He has spent his entire life putting our country first.

Catch up on the latest news from the 2020 campaign trail.

Catch up on the latest news from the 2020 campaign trail.

The virus dominates the vice-presidential debate between Pence and Harris.

Biden Hopes to Fight Autocracy Abroad. He’ll Have to Start at Home.