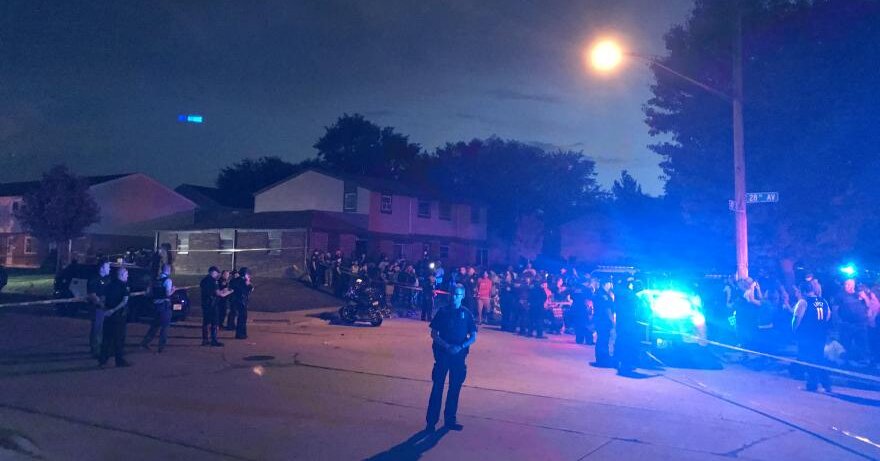 In an encounter captured on video, a Black man being confronted by police officers in Kenosha, Wis., on Sunday was shot multiple times as he tried to open the driver-side door of a parked vehicle on a residential street, according to police officials and bystander video.

The man, who was not identified, was reported to be in serious condition at a Milwaukee hospital on Sunday night.

Just after 5 p.m. police officers in the city of Kenosha, about 40 miles south of Milwaukee, responded to a domestic violence incident, according to a spokesman for the Kenosha Police Department.

A video taken by a bystander and posted on social media appears to show what took place moments before the shooting.

In the video, several officers are seen standing on a sidewalk next to a four-door sport utility vehicle. A man wearing a white tank top and black shorts walks along the passenger side of the vehicle, away from the officers as they yell and as at least one of them points a gun at the man.

The man walks around the front of the vehicle and opens the driver-side door. Numerous people can be heard yelling, and one officer grabs the man’s shirt. As the man opens the door, at least half a dozen shots are heard while at least two officers can be seen with their guns pointed at him. The video, which is about 20 seconds long, ends shortly after the shooting.

A spokesman for the Police Department, Lt. Joseph Nosalik, said in a statement that the shooting would be investigated by the Division of Criminal Investigation at the Wisconsin Department of Justice.

The episode came as protests erupted across the country after the death of George Floyd in police custody in Minneapolis in May. That lengthy encounter with the police was captured by police body cameras and bystander cellphone video.

Julián Castro, the former mayor of San Antonio who sought the 2020 Democratic presidential nomination, tweeted video of the shooting and wrote, “We’re no other non-lethal methods considered, @KenoshaPolice?”

An Open Letter on Free Expression Draws a Counterblast

The Economy Is Reeling. The Tech Giants Spy Opportunity.