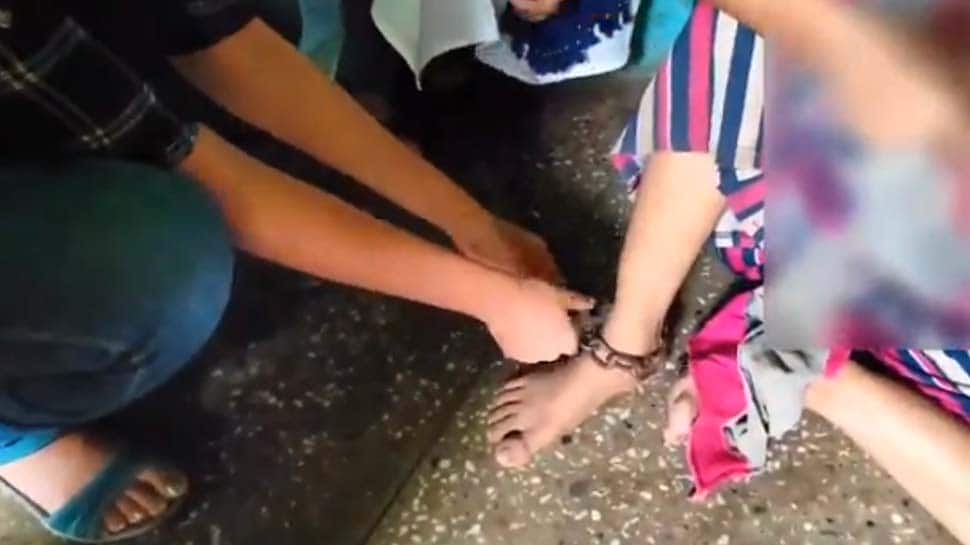 In a shocking incident, a 32-year-old woman was bound in iron chains, tortured and held captive by her husband for several months in East Delhi’s Trilokpuri. The Delhi Commission for Women (DCW) on Tuesday rescued the woman, who had been married for the last 11 years and was held captive in her own house. The DCW said that they are in the process of filing an FIR in the case.

The room in which she was kept had no fan and a foul smell was emanating from it as she was made to lie in her own excreta. She was tortured and beaten so brutally that it had taken a toll on her mental health, the DCW said.

After getting information from the Commission’s Mahila Panchayat team that a woman was being held captive, DCW members Firdos Khan and Kiran Negi escalated the matter and reached the location along with panel chairperson Swati Maliwal.

The team found the woman lying on the floor with her feet bound in iron chains. “She was in a miserable condition with torn clothes,” the DCW said. After talking to the woman, the team learnt that the woman had been married for the last 11 years and had three children. She informed the DCW that her husband used to beat her brutally and she had been locked in chains for the last six months.

The panel said even her children confirmed that their father used to often beat them and their mother. After freeing her, the DCW team is taking care of the victim’s treatment.

DCW Chief Swati Maliwal stated, “The torture inflicted on her has left deep scars. She is even suffering from mental health issues now. We have rescued her and have started working on her rehabilitation. We will ensure strongest action against the perpetrators of the crime.” She also said that action will be taken against the accused husband and her in-laws.

Upon investigation, it was found that the victim’s husband owns a flour mill and the victim was perfectly fine earlier, news agency PTI said. A senior police officer said the woman was taken to Lal Bahadur Shastri Hospital, in Kalyan Puri for medical examination and based on her statement, they are in the process of filing an FIR, added PTI. “All what DCW claims is part of the investigation,” he said.

Auction Prices That Take Your Breath Away

The Perfect Ending to Our Pandemic Honeymoon Road Trip