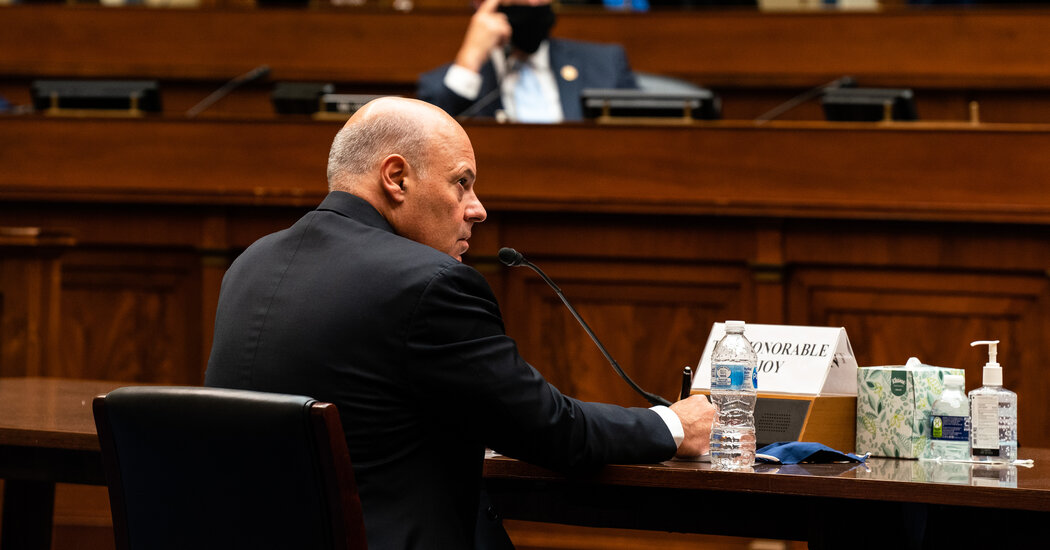 Louis DeJoy, the postmaster general, appeared before lawmakers again on Monday, this time testifying to the Democratic-run House oversight committee. He faced much tougher questioning than he did on Friday, when he testified before a committee of the Republican-run Senate.

In his opening remarks, Mr. DeJoy continued defending the cost-cutting measures he has put in place and pushed back against suggestions that the changes were intended to influence the 2020 election by making mail-in voting less reliable.

He told the lawmakers that while some changes he had implemented, such as reducing overtime, had caused delays, those issues were being addressed.

“While we have had temporary service decline, which should not have happened, we are fixing this,” Mr. DeJoy said.

Representative Carolyn B. Maloney, Democrat of New York and the chairwoman of the oversight committee, said the expectation that his changes at the agency would not cause mail delays reflected “incompetence at best.”

After Representative Stephen F. Lynch, Democrat of Massachusetts, repeatedly asked whether Mr. DeJoy would return the mail-sorting machines that have already been removed from post offices, the postal leader barked, “I will not.” He then added that Mr. Lynch had spread “misinformation” during his furious monologue.

“How sad is it when the cancel culture has reached the halls of Congress,” Mr. Walker said. “The man sitting before this committee today is not who the Democrats have villainized him to be. He’s here today because he supported President Trump.”

Democrats have been leery of Mr. DeJoy’s role as a megadonor to Republicans and President Trump, who has sown distrust about mail-in voting on Sunday. Mr. DeJoy acknowledged in the House committee hearing that he did not find Mr. Trump’s comments helpful.

“I have put word around to different people that this is not helpful,” he said, in response to a question from Representative Gerald Connolly of Virginia.