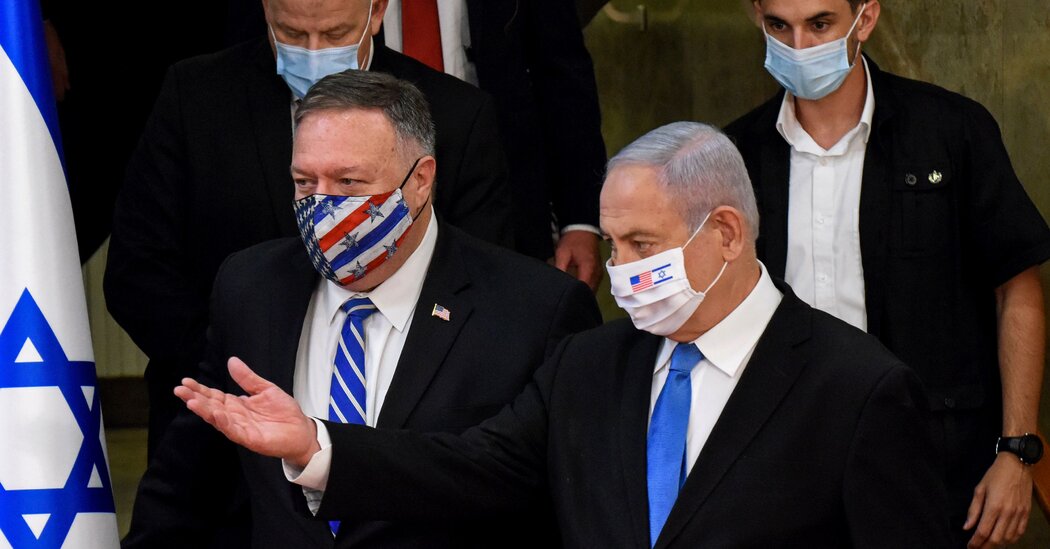 WASHINGTON — The Trump administration sought on Tuesday to test the waters to determine if it can persuade other Arab and Muslim countries to establish full diplomatic relations with Israel after a breakthrough agreement by the United Arab Emirates to open normal ties.

Secretary of State Mike Pompeo visited Sudan and Bahrain, two of the administration’s top prospects for bringing Israel together with more of its neighbors in a region where it has faced generations of hostility. But American officials cautioned that the situation remained fluid and no one should expect overnight agreements.

To maintain a sense of momentum, President Trump is sending a delegation to Israel next week to accompany high-level Israeli officials on the first direct commercial flight between Tel Aviv and Abu Dhabi, the capital of the United Arab Emirates, probably on an El Al carrier with its traditional Star of David on the tail. The delegations will seek to forge cooperation in the aviation, security, health and banking sectors, among others, in accordance with the agreement that the two nations announced two weeks ago.

“This is a historic agreement,” Prime Minister Benjamin Netanyahu of Israel said in a statement. “It will bring engines of growth. It can help bring about an economic flourishing in general and during the corona era in particular. I hope that other countries in our region will join the cycle of peace.”

Reflecting on the inaugural flight to the Emirates, scheduled for Monday, Mr. Netanyahu added: “I also hope that you, citizens of Israel, will also be able to visit Dubai and Abu Dhabi soon. There is much to see there.”

The American delegation will be led by Jared Kushner, the president’s son-in-law and senior adviser who has led efforts to forge peace in the Middle East, along with Robert C. O’Brien, the national security adviser; Avi Berkowitz, Mr. Trump’s Middle East envoy; and Brian Hook, the outgoing special envoy for Iran.

Officials did not comment on the route the plane would take, which involves diplomacy of its own. While El Al has regular service with Jordan, it would need to fly through airspace where it is normally not allowed, over either Iraq or Saudi Arabia. Iraq’s prime minister visited Mr. Trump at the White House last week, which may have cleared the way.

If fulfilled, the Aug. 13 agreement, called the Abraham Accord, would make the Emirates the third Arab nation along with Egypt and Jordan to have full diplomatic relations with Israel, including the exchange of embassies and ambassadors. The Emirates signed off on the deal after Israel agreed to suspend annexation of parts of the West Bank.

The White House hopes to enlist others to follow suit, with Sudan, Bahrain and Oman at the top of the list, in effect formalizing a growing Israeli-Arab alignment against Iran, even at the expense of the Palestinians, who complained about being abandoned.

Mr. Pompeo made a point on Tuesday of posting on Twitter a photograph of his airplane’s in-flight map during his flight from Tel Aviv to Omdurman in Sudan. “Happy to announce that we are on the FIRST official NONSTOP flight from Israel to Sudan!” he wrote.

From there, he flew to Bahrain, where he tweeted: “The Abraham Accords show that peace is achievable. Seizing the momentum is vital.”

But there are complicating factors. Sudan has been ruled by a transitional government since the fall of President Omar Hassan al-Bashir last year, and a spokesman was quoted telling news agencies that it “does not have a mandate” to “decide on normalization with Israel.”

Moreover, Sudan wants something from the United States — to be taken off the list of state sponsors of terrorism, a designation it has had since the 1990s when it sheltered Osama bin Laden — which would help reintegrate its struggling economy with that of the outside world.

Mr. Pompeo wants Sudan to compensate victims of the 1998 bombings of two American embassies in East Africa before it is removed from the list, while Sudan wants Congress to provide immunity against future lawsuits stemming from past terrorist incidents.