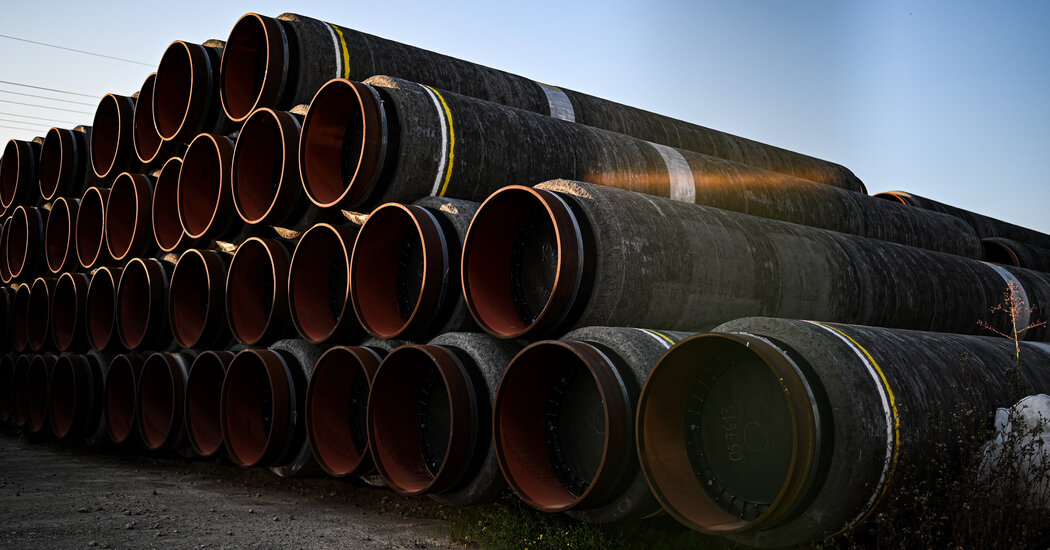 There is something profoundly skewed in America’s foreign relations when senators threaten “crushing legal and economic sanctions” against a port city of a close European ally.

That was what three Trump-supporting Republicans — Ted Cruz of Texas, Tom Cotton of Arkansas and Ron Johnson of Wisconsin — did in a letter sent this month to a German port largely owned by the Baltic coastal town of Sassnitz and the state of Mecklenburg-Western Pomerania. They vowed to economically destroy the port, town and region unless the port ceased support for the construction of a gas pipeline between Russia and Germany.

That pipeline, Nord Stream 2, has been controversial from the start. It is intended to double the volume of natural gas piped under the Baltic Sea directly from Russia to Germany and the European network, bypassing Ukraine and Eastern Europe and thus reducing the transit fees they collect.

Many critics in Europe and the United States have argued that the pipeline will make Europe, and Germany in particular, in the words of President Trump, “a captive to Russia,” and would help finance global mischief by President Vladimir Putin of Russia. Mr. Trump has been especially worked up by the notion that the United States is paying a disproportionate share of the cost of protecting Europe from Russia while Germany is cutting gas deals with Moscow.

The Trump administration has also been pushing American exports of liquefied natural gas, which it likes to call “freedom gas.” Texas, Mr. Cruz’s state, would be the biggest beneficiary.

German and European Union supporters of the pipeline argue that Europe is already buying huge amounts of Russian gas, and that only the route is changing to make supplies more secure. To soften the blow to Ukraine from the loss of transit fees, the Germans prevailed on Russia to agree to a five-year extension of shipping gas through Ukraine.

These arguments have gone back and forth for many years, fanned by a perception of Russia as an enemy that must be punished and isolated. The Obama administration, including Joe Biden, also opposed the construction of Nord Stream 2, though it did so diplomatically. Bipartisan opposition in Congress finally led to a threat of sanctions under the 2020 National Defense Authorization Act, which halted construction on the last stretch of the pipeline and compelled Russia to deploy its own pipe-laying ships. They could complete the project in about a year.

Last month, Secretary of State Mike Pompeo turned up the pressure by lifting an exemption for the pipeline from a 2017 bill known as the Countering America’s Adversaries Through Sanctions Act. In effect, anyone helping to construct the pipeline was potentially vulnerable to sanctions. It was this threat that the three senators invoked in their letter: Board members, corporate officers and shareholders of the owners of the port would be barred from the United States, “and any property or interests in property they have within our jurisdiction will be frozen.”

As the owners of the port are mostly Sassnitz and Mecklenburg-Western Pomerania, that would make many elected officials and civil servants of a close and friendly ally subject to the sort of sanctions applied against rogue nations.

Whether Nord Stream 2 amounts to the “grave threat to European energy security and American national security” that Senators Cruz, Cotton and Johnson invoke is questionable. Russian gas already flows through Ukraine and another undersea pipeline, Nord Stream 1, and more will soon reach Europe through a Turkish pipe.

At the same time, Europe has no shortage of gas, and the European gas market has grown far more capable of getting the gas it needs from sources other than Russia. Countries from Germany to Croatia are building liquefied natural gas terminals to handle imports from around the world — not only from the United States, but countries like Qatar, Nigeria and Australia.

Germans argue that it is Russia that needs the income from Europe more than Europe needs Russia’s gas. Pushing Russia away, they say, would turn Russia more toward the east and strengthen its ties to China.

The shock and fury provoked in Germany by the senators’ letter has been deafening. “Completely outrageous,” “blackmail,” “declaration of economic war” are just a few of the reactions from German and E.U. officials. Even those who oppose Nord Stream 2 have been stunned by the arrogance and audacity of being treated like a lawless colony.

That fury may be where the real threat to American national security lies. By effectively substituting sanctions, bluster and threats for foreign policy the Trump administration and its acolytes in Congress have alienated the very allies the United States needs to shape a viable resistance to Mr. Putin or any other dangerous actor.

More than likely, Nord Stream 2 will be completed soon. Only a 90-odd mile stretch of pipe remains to be laid, and in their anger the Germans may be less likely to back away. But even if the senators’ threat to destroy Sassnitz is not carried out, it’s already done great damage.

A critical American ally has been alienated, widening a trans-Atlantic rift that is one of Mr. Putin’s major pursuits. Interest in American “freedom gas” has no doubt fallen; Russia has been nudged closer to China. That’s not what foreign policy is meant to achieve.

The Rising Trump Lawyer Battling to Reshape the Electorate

Centre responsible if any protester faces health problems, better to hear their plea at...

NFL Week 10 Predictions: Our Picks Against the Spread

An Arms Dealer, an Ex-N.F.L. Player and Huge Federal Contracts for Medical Gowns