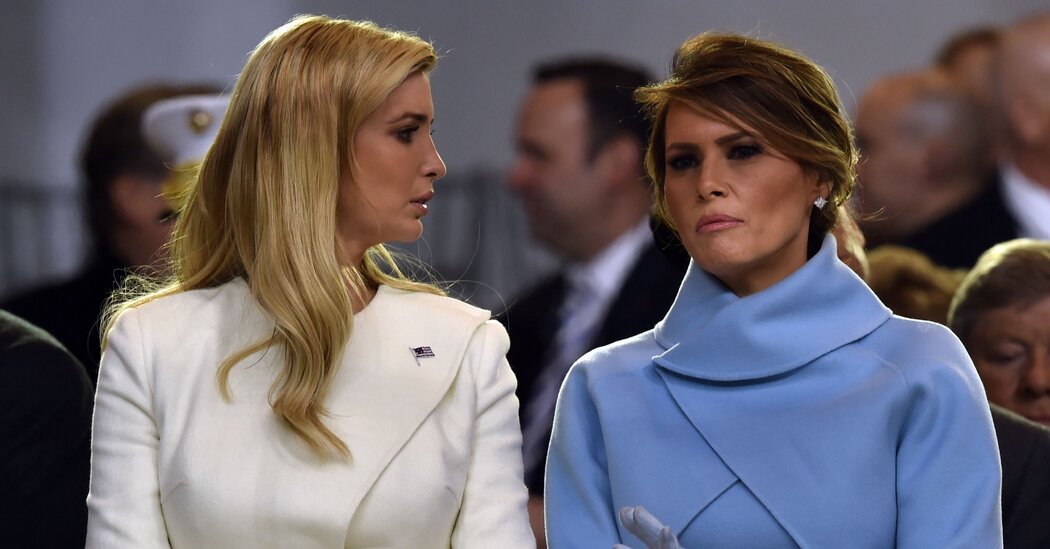 Melania Trump was the sister Stephanie Winston Wolkoff never had — “a really confident, perfectly coiffed, ultimate older sister,” the former senior adviser to the first lady writes in “Melania and Me,” her epic scream of a tell-all, which comes out Tuesday.

For 15 years, the women were “like Lucy and Ethel, or Snooki and JWoww,” lingering over lunch in chic restaurants, attending each other’s baby showers and surprise parties, and trading adoring emoji-laden texts. In fact, the greatest reveal in “Melania and Me” may be the fact that Mrs. Trump’s enthusiasm for emojis appears to rival her husband’s for Twitter. With strings of happy and sad faces and hearts galore, she telegraphs a remarkable range of triumphs and disappointments — and now readers will see how correspondence from first ladies has evolved since the days when Abigail Adams implored her husband to “remember the ladies.”

Even in its heyday, the Wolkoff-Trump merger was rife with red flags: Mrs. Trump rarely appeared at Wolkoff’s charity events, and persistently called the author’s son by the wrong name (“Taylor” instead of “Tyler”). Regardless, from the early 2000s to February 2018, when Wolkoff was abruptly dismissed from her role in the East Wing, the former Vogue staffer remained loyal to Mrs. Trump. She was protective of the first lady, believed in the potential of the Be Best initiative (if not its name) and worked to the point where her body buckled under the stress of office politics. In the aftermath of her dismissal — handled by email, in a message addressed jointly to Wolkoff and a similarly fated colleague — she was, by her own admission, “a freaking basket case.”

“I was there at the beginning,” Wolkoff writes. “I witnessed the transformation of Melania from gold plate to 24-karat gold. I believed she had the heart to match, that she was genuinely caring and loving and worth all of our attention. Throughout our early friendship, she lived up to what I saw in her. Watching her now, and seeing that only the gold shell remains, I have to wonder if that’s all she ever was, and I was the sucker who bought the fake watch on the street corner.”

Here’s a look at what readers will learn on Wolkoff’s tour of what she calls “Mel-La-Lania Land.”

Wolkoff quotes one of Mrs. Trump’s oft-repeated lines: “Pleasing anyone else is not my priority.” And later, Wolkoff writes: “Ever the pragmatist, she reasoned that since she had no control over people’s thoughts, why should she care what they believed.”

At the height of the family separation crisis in 2018, Melania bemoaned the media’s coverage of children being taken from their parents. In a phone call with Wolkoff, she allegedly said: “They’re not with their parents, and it’s sad. But the patrols told me the kids say, ‘Wow, I get a bed? I will have a cabinet for my clothes?’ It’s more than they have in their own country, where they sleep on the floor.” (“Melania and Me” contains lengthy quotes from phone conversations. Wolkoff doesn’t address the question of whether she took notes, recorded the calls or pieced them together from memory.)

Mrs. Trump launched Operation Block Ivanka to make sure the president’s older daughter didn’t steal the spotlight at the inauguration.

Wolkoff goes into great detail about Ivanka Trump’s intense focus on guest lists, seating charts, messaging and motorcades. “Will there be a step and repeat?” Ivanka emailed. “Where will it be?” “Princess,” as Ivanka’s stepmother calls her, was eager to be included in a portrait of the new first family, usually shot in the Blue Room of the White House; Mrs. Trump rebuffed her.

“Melania was not thrilled about Ivanka steering the schedule and would not allow it,” Wolkoff writes. “Neither was she happy to hear that Ivanka insisted on walking in the Pennsylvania Avenue parade with her children.” These machinations led to a concerted effort to keep the first daughter’s “face out of that iconic ‘special moment.’” Wolkoff and her team orchestrated seating and studied camera angles to make sure Ivanka’s face would be hidden in pictures. (When the day arrived, Wolkoff learned that she and her family had been assigned to an area without chairs. They were eventually upgraded to V.I.P. seating.)

The grimace that inspired #FreeMelania? There’s a story behind it.

Mrs. Trump’s much-discussed miserable facial expression at the inauguration wasn’t in reaction to her husband, according to Wolkoff: “Melania suddenly frowned and looked down and to her right because Barron had kicked her in the ankle by accident.” Wolkoff suggested that she set the record straight to quell chatter about marital discord, but the first lady said, “I don’t owe them an explanation.”

Mrs. Trump demanded renovations to the White House, but didn’t always get her way.

Wolkoff recalls Melania’s response to her future bedroom: “I’m not moving to D.C. until the residence has been renovated and redecorated, starting with a new shower and toilet.” Eventually she had her office painted Middleton Pink, but the ivory shade she selected for her bedroom was overruled by the president in favor of a darker tone.

The president won’t eat off a plate that has been touched by a friend.

In the restaurant at Mar-a-Lago, the president had his eye on a big slice of chocolate cake. “I handed him an empty plate, my fingers on the bottom and my thumb on the top edge, a perfectly natural and normal way to hand someone a plate. He stared at my thumb as if it were on fire,” Wolkoff writes. “He beamed at me as he took the plate and then, when he thought I wasn’t looking, he put it down and got another.”

The first lady voices her opinions to her husband.

Wolkoff cites two instances when Mrs. Trump broke ranks with the president: first, on the issue of bathrooms for transgender people. The first lady asked Mr. Trump why he inserted himself into the discussion, and Wolkoff quotes him as saying: “I didn’t need to get involved. I could have let the Supreme Court deal with it. But it was very important to Mike,” meaning the vice president.

Later, she chides Mr. Trump for lifting the ban on the import of big-game trophies from Africa — a move he made in response to pressure from his sons. Wolkoff writes: “Melania was not sympathetic to ‘the boys’’ lobbying efforts for guns and hunting or the bizarre need to hang a dead animal head on the wall. That night, she did some lobbying of her own, and her plea to Donald actually worked.” The next day, the president tweeted: “Put big game trophy decision on hold until such time as I review all conservation facts.”

Mrs. Trump enjoys “her game of hide-and-seek with the American public.”

In May 2018, Melania underwent surgery for a “benign kidney condition,” then disappeared from public view for nearly a month. Wolkoff had been dismissed from the East Wing by then, but she describes a phone conversation during which Melania chuckled over the media’s speculation on her whereabouts. “‘Face lift? I’m too scared!’ she said. ‘Nervous breakdown? I’m like, seriously? They don’t even know me.’” Wolkoff recalls Melania quoting a friend who told her, “You give people nervous breakdown, you don’t have it your own!”

Wolkoff writes: “Tell me about it, sister.”

Britain Plans Incentives to Bring Its Workers Back

Why Is Iran Kidnapping and Executing Dissidents?