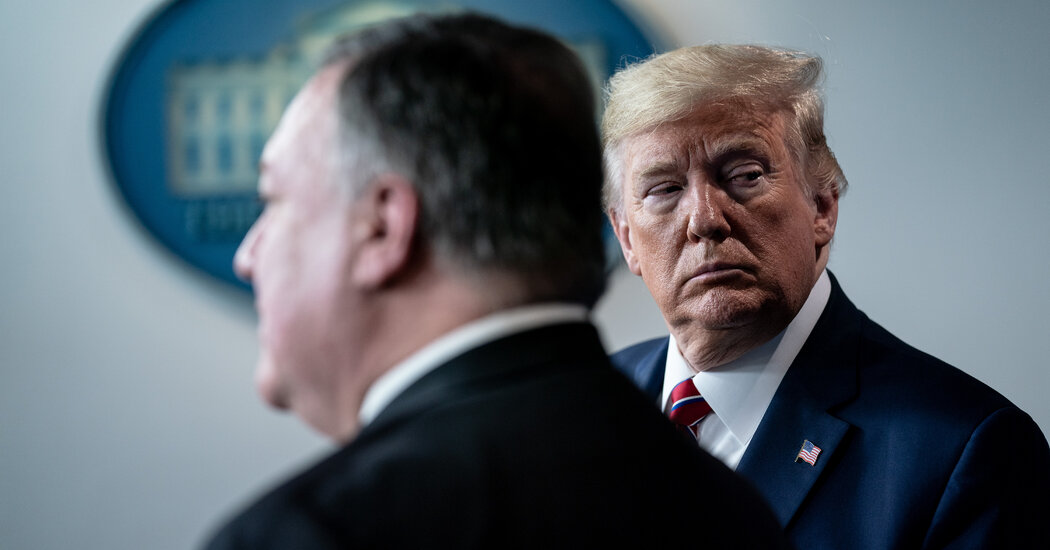 PARIS — Henry Kissinger this month called François Delattre, the former French ambassador to the United States who is now the secretary general of the Foreign Ministry. Kissinger was concerned about the deteriorating state of U.S.-Chinese relations and the risk that the situation could slip out of control.

Delattre told me he has his own concerns in that regard. An October surprise might involve a military incident in the South China Sea that President Trump uses to demonstrate American resolve against President Xi Jinping’s China. The resolve that would supposedly vanish in the event of a Joe Biden victory, whereupon, Trump claimed in a 70-minute speech on the South Lawn of the White House, “China would own our country.”

Trump is like the Bellman in Lewis Carroll’s “The Hunting of the Snark”: “I have said it thrice: What I tell you three times is true.” China would no more own Biden’s United States than Trump’s United States owns Greenland.

“It’s lonely being a European today,” Delattre mused. Russia is hostile. China is hostile. Emerging powersview the postwar multilateral organizations which Europe prizes as relics of a world made by and for Western powers — and want to change them. As for the United States, it’s absent.

Increasingly, Europeans speak of the need for “containment” of the United States if Trump is re-elected, the term coined by the U.S. diplomat George Kennan to define America’s Cold- War policy toward the Communist Soviet Union. That would be a shocking development, except that nothing is shocking any longer.

Not in a world where presidential falsehoods repeated thrice, or more, are “true.”

Not after a Republican National Convention during which Mike Pompeo, the toadying secretary of state, sang the praises of Trump’s “‘America First’ vision” from a Jerusalem rooftop in open defiance of the Hatch Act, which prohibits federal employees from engaging in political activities while on the job.

“Pompeo is the worst and most corrupt secretary of state ever,” Norman Ornstein, a resident scholar at the American Enterprise Institute, told me.

Not after Trump set the scene for a demolition of American democracy by saying on the convention’s opening day that “the only way they can take this election away from us is if this is a rigged election.”

Not after Trump, in an acceptance speech that, in the Pompeo mold, commandeered the White House for political purposes, warned darkly, “If the left gains power they will demolish the suburbs.” Not after Trump has turned the Republican Party into a personality cult. Not after Trump concluded from the impeachment proceedings that he can get away with anything.

I asked Ornstein, not prone to histrionics, how real the threat to American democracy is, at 67 days from the election. “If we are not at Defcon 1, we are pretty close,” he said, referring to the label used by the United States armed forces for the highest level of threat.

Europeans know how this goes. Viktor Orban, the rightist Hungarian prime minister, has established a template for the authoritarian system Trump would pursue if re-elected: neutralize an independent judiciary, demonize immigrants, claim the “people’s will” overrides constitutional checks and balances, curtail a free media, exalt a mythologized national heroism, and ultimately, like Orban or Vladimir Putin or Turkey’s Recep Tayyip Erdogan, secure a form of autocratic rule that retains a veneer of democracy while skewing the contest sufficiently to ensure it can yield only one result.

In fact, of course, Trump has long since started down this road. He has Attorney General William Barr’s Justice Department in his pocket. He is on course, as he boasted in his speech, to appoint more than 300 federal judges. He already has his sights on The Washington Post’s owner, Jeff Bezos.

He is working hard at voter suppression and attempts to disqualify legitimate votes. “Mail ballots, they cheat,” the president claims. Mail ballots are “substantially fraudulent.” Mail ballots “will be printed by foreign countries.”

What I tell you three times is true. Like saying over and over that a Biden victory will lead to destruction or that he has done more for African-Americans than any president since Lincoln. Trump is orchestrating mayhem to keep the job that is probably his only means of evading New York prosecutors and a jail sentence. Surveys suggest masked Democrats are far more likely than unmasked Republicans to vote by mail. Hence Trump’s drumbeat and the recent accelerated removal of postal sorting machines.

Officials close to Biden are looking at several ominous scenarios: Trump claiming victory before the votes in battleground states are fully counted — a count that could take many days or even weeks given the likely number of absentee ballots; Trump, supported by Barr, who has claimed that foreign governments have produced counterfeit mail ballots, refusing to concede and challenging the validity of the mail-in voting tally; some attempt by Trump to use the armed forces to help him win; Trump contesting the outcome in one or more states, so that neither Biden nor Trump has the needed 270 electoral votes and the election is determined by Republican-majority delegations with one vote per state.

Absent a Biden landslide, and I don’t see one, any of this could happen — and Europe will want to “contain” that America. Like Kissinger and Delattre, I am worried about China. But perhaps it is Xi’s move to eliminate presidential term limits and become emperor for life that concerns me most as a potential model for His Neediness.

Where We Stand on the Pandemic

After refusing to do so, Trump orders flags to be flown at half-staff.