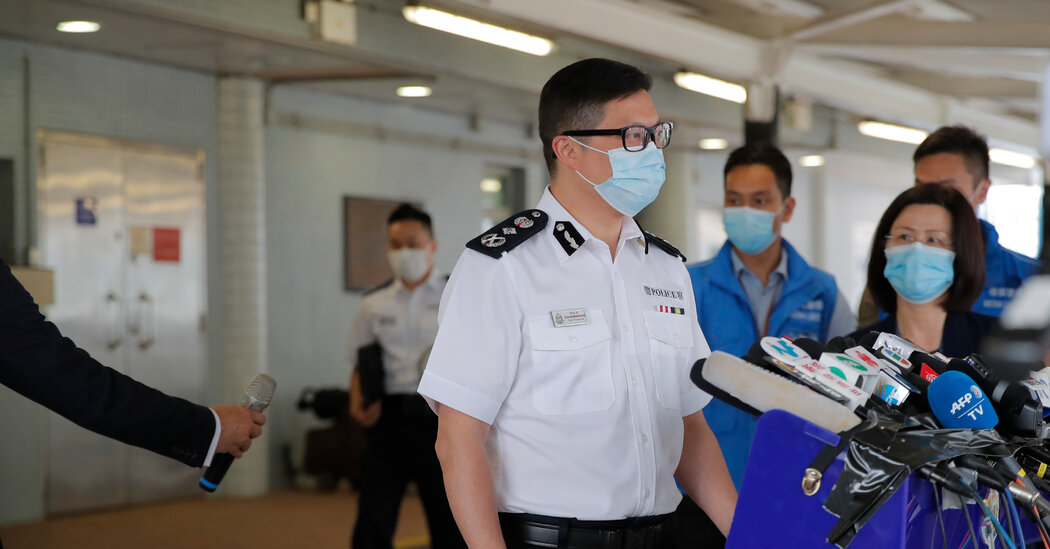 HONG KONG — Chinese authorities have detained a dozen activists from Hong Kong who were attempting to leave the territory via speedboat, according to people familiar with the attempt and the individuals captured, as Beijing intensifies a campaign to seek out protest leaders and others resisting the Communist Party’s tightening grip.

At least one of the people on board the boat, seized on Sunday by the Chinese Coast Guard, was an activist who was being investigated under the city’s new national security law, said one of the people familiar with the capture.

The group was apparently trying to flee to Taiwan, said a second person familiar with the episode. More than 200 Hong Kong protesters and activists have sought refuge in Taiwan over the past year. The detentions on Sunday were the first confirmed case of such activists being caught by the Chinese authorities at sea.

The attempts to flee Hong Kong point to the anxiety that has set in among activists as China’s ruling Communist Party tightens its grip over the semiautonomous city to quell dissent. Beijing imposed a sweeping security law on the city on June 30 that punishes political crimes such as subversion with potentially heavy prison sentences.

China’s Coast Guard said that on Sunday it had stopped a speedboat about 45 miles southeast of Hong Kong Island. Officers detained more than 10 people suspected of illegally crossing the border, the Coast Guard said on an official social media page on Wednesday, without providing further details.

Among the people captured was Andy Li, a Hong Kong activist who helped organize a group of independent poll monitors from overseas for local elections last year, one of the people said. Mr. Li had also traveled to Geneva and the United States to advocate for Hong Kong’s democracy movement.

Mr. Li had been arrested in Hong Kong on Aug. 10 as part of a broad police sweep that included Jimmy Lai, the prominent founder of a pro-democracy newspaper, Apple Daily. Mr. Li was later released on bail.

It was not immediately clear if Mr. Li and the others detained by the Chinese Coast Guard would face potential immigration charges in Guangdong Province or be directly returned to Hong Kong.

For many in Hong Kong, activists’ attempts to flee the city have evoked the memory of efforts to spirit dissidents out of mainland China after the Chinese military’s deadly crackdown on protesters around Tiananmen Square in Beijing in 1989. During tumultuous earlier periods in China’s recent history, refugees fled to Hong Kong through similarly perilous routes.

The Hong Kong police said they were notified by the mainland authorities on Friday that 12 residents between the ages of 16 and 33 had been detained. Hong Kong’s security bureau said on Friday that they were being held by the authorities on the mainland and that the city’s police would seek information about their cases and notify their family members. They did not confirm the residents’ identities.

Members of the pro-democracy movement in Hong Kong have mostly reacted with caution as details of the detentions have trickled out. Some have said that the apparent escape attempt pointed to the desperation of young activists and called for their rights to be protected.

“The Hong Kong government has the responsibility to ensure that the arrested Hong Kongers are being treated humanely and have basic rights including access to a lawyer,” Joshua Wong, a prominent pro-democracy activist, wrote on Friday.

The detentions have raised the prospect that the activists might be prosecuted in the mainland, where courts are opaque and controlled by the Communist Party.

Chris Tang, the city’s police commissioner, said on Thursday that, in general, someone arrested on the mainland who is wanted by the Hong Kong police would be transferred back to the city.

There is currently no formal extradition agreement between the mainland and the former British colony. It remains a contentious issue in Hong Kong, and one that set off last year’s protests, as many feared an extradition arrangement would expose people in Hong Kong to China’s judicial system.

But under the new national security law imposed by Beijing in June, defendants in cases deemed important or “complex” can be sent to the mainland courts for trial, where convictions are usually assured.

Both the Guangdong public security department and a spokesman at the provincial Guangdong government said they did not have any information about the detentions.

But pro-Beijing media outlets in Hong Kong, including the Chinese government-controlled Wen Wei Po, reported that the activists had faced arrests or ongoing legal cases linked to the antigovernment protests. They had already surrendered their travel documents to the police as a result, lawyers said.

Separately, on Friday, Wilson Tam of the Hong Kong police’s technology crime division said that a 26-year-old man believed to be a manager of a popular Telegram channel used by protesters, which had over 100,000 subscribers, had been arrested. The man is facing seven charges, including inciting others to commit public nuisance, arson and criminal damage, Mr. Tam said.

Signs That Define a Building, and Sometimes a City

Where Is the Republican Party Heading?