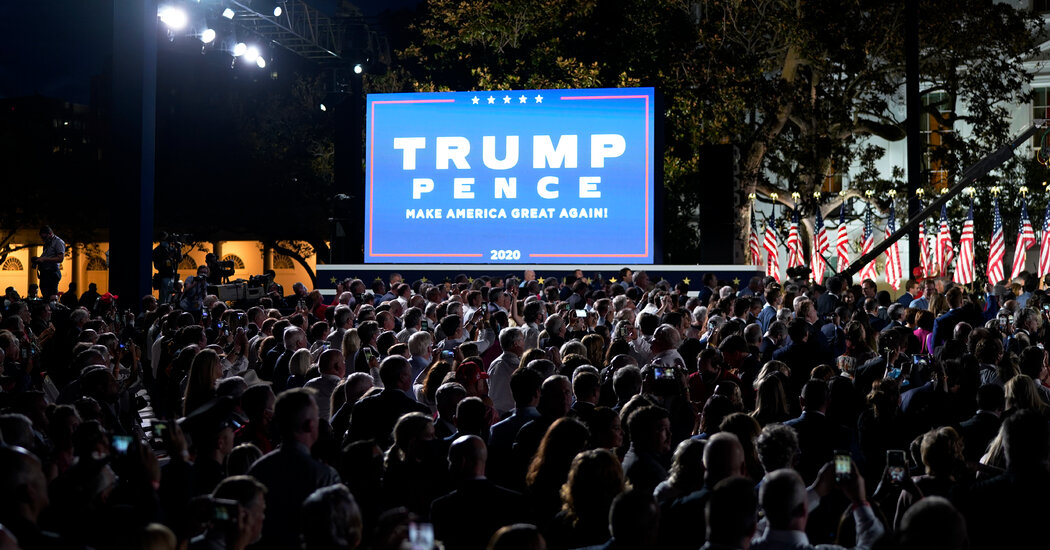 WASHINGTON — For four days, the Republican National Convention projected the image of a nation that had beaten the coronavirus, with maskless supporters packed close together and free to carry on with their lives thanks to the quick, powerful and effective response of President Trump, who crushed a pandemic when it reached American shores.

The truth is another story.

With more than 180,000 Americans dead and the economy still mired in recession, no issue threatens Mr. Trump’s re-election like the coronavirus. To make the post-pandemic imagery stick, speaker after speaker — especially the president — had to paint a narrative that rewrote history and was resplendent with distortions, exaggerations and outright falsehoods.

From the start of the pandemic Mr. Trump downplayed the coronavirus, saying in an interview in January that “we have it totally under control” and speculating in February that it “could maybe go away.” Far from condemning Beijing’s handling of what he would later refer to as the “China virus” or the “Chinese virus,” Mr. Trump initially praised President Xi Jinping’s handling of it.

By March 15, as daily cases continued to increase, Mr. Trump said the virus was “something we have tremendous control of.”

These dismissals, however, did not stop one speaker, a nurse named Amy Ford, from declaring on Monday that “President Trump recognized the threat this virus presented for all Americans early on and made rapid policy changes” or Secretary of State Mike Pompeo from claiming that “the president has held China accountable for covering up the China virus.”

Mr. Trump did place restrictions on travel from China on Jan. 31, effective February 2, but they only applied to foreign nationals and included exceptions. The porous “ban” ultimately allowed 40,000 to travel from China to the United States from the end of January to April. It wasn’t until March 13 that similar restrictions were placed on travel from Europe, and by then, a virulent European strain of the virus was already widespread in New York City.

In fact, Mr. Trump’s botched announcement of the European travel ban set off a chaotic exodus of Americans from the continent that overwhelmed U.S. airports and most likely let in thousands of cases.

Addressing the convention on Wednesday night, Vice President Mike Pence proclaimed that “before the first case of the coronavirus spread in the United States, the president took unprecedented action and suspended all travel from China, the second largest economy in the world.” That is not true.

And in the telling of Representative Matt Gaetz of Florida, “President Trump saved lives by shutting down flights from China and Europe.” Another speaker, Natalie Harp, put it more hyperbolically: “Millions would have died” had it not been for the restrictions.

As the virus began to spread in the United States and around the world, the federal government was slow to develop testing at the scale necessary to monitor the pandemic. Myriad failures in testing in the critical early days of the pandemic — a botched kit from the Centers for Disease Control and Prevention, restrictions on who could be tested, and delays in monitoring — left the country blind. By the end of March, testing in the United States still lagged behind many other countries as measured by population.

Still, Mr. Trump and Mr. Pence celebrated the United States’ testing record, with Mr. Trump boasting that “America has tested more than every country in Europe put together.”

The president was similarly hesitant to use the full powers of the Defense Production Act, a federal law that gives him the authority to mobilize industry in the interest of national security. He signed an executive order on March 18 invoking portions of the law, including the power to essentially direct private businesses to make certain supplies and products.

Mr. Trump did not exercise that power until March 27, amid a torrent of criticism from governors and public health officials over shortages in ventilators and personal protective equipment. Mr. Trump invoked the law to force General Motors to make ventilators while still maintaining that “nationalizing our business is not a good concept.” By July, there was still no widespread use of the law to combat the virus.

Yet according to Mr. Pence, Mr. Trump “marshaled the full resources of our federal government from the outset.” The president also echoed this when he claimed credit for the “largest national mobilization since World War II,” citing his invocation of the Defense Production Act.

The way Mr. Trump cited the data on virus deaths in the country also presented a false picture. In April, the number of average daily deaths peaked at between 2,000 and 2,200. Cases and deaths fell and plateaued as spring turned into summer, before roaring back as a number of states relaxed social distancing rules and began reopening their economies. Average daily deaths increased from between 400 and 500 in July to over 900 today.

Despite the uptick, Mr. Trump celebrated the 80 percent decline in the number of deaths since April — cherry picking the peak and comparing it to a low point that has since passed — and falsely claimed again that the United States had “among the lowest case fatality rates of any major country anywhere in the world.” (It ranks in the top third around the world.)

As states began issuing stay-at-home and social distancing orders to contain the spread, Mr. Trump resisted, worrying that a shutdown would imperil the economy, the focal point of his re-election effort. Even after the federal government recommended social distancing on March 16, Mr. Trump continued to sound skeptical of the measures that experts said were necessary to save lives, at times urging reopening and arguing that a recession would be deadly as well.

That was not how Ivanka Trump portrayed it Thursday night, when she declared of her father: “I watched him take the strongest, most inclusive economy in our lifetime, the lowest unemployment in half a century, and the highest wage increase for working families in decades — and close it down to save American lives.”

While other countries began to flatten their curves and reopen their economies, the outbreak continued to rampage through the United States. The unemployment rate skyrocketed to 14.7 percent in April — the highest rate since the Great Depression — before declining to 10.2 percent last month. From February to April, the economy lost 20 million jobs before regaining 9 million. Gross domestic product fell 9.5 percent in the second quarter.

In his acceptance speech, the president focused on the gain of “9 million jobs, and that’s a record in the history of our country” and misleadingly claimed to have “the smallest economic contraction of any major western nation.” (The 9.5 percent was lower than the average of countries tracked by the Organization for Economic Cooperation and Development, but still above more than a dozen other O.E.C.D. countries.)

Although scientists are racing to develop treatments that will fight the coronavirus, only a handful are considered promising, and all need further study. No drugs have been found to be safe and effective treatments for Covid-19 by the Food and Drug Administration.

The president declared, “We developed a wide array of effective treatments, including a powerful antibody treatment known as convalescent plasma,” which he claimed “will save thousands and thousands of lives.”

In fact, convalescent plasma has been used by doctors for decades, and with coronavirus patients since the early days of the outbreak. Its effectiveness, however, is still in question and has most likely been exaggerated by the administration, and because it must be made from blood donations from Covid-19 survivors, its availability is expected to be limited.

As for a vaccine, it is impossible to predict when one will become availability with certainty. A few drug makers are far along in testing their vaccines, but the process then includes securing F.D.A. approval, ramping up manufacturing and setting up a distribution system — an awful lot to pack into the next four months.

Nevertheless, Mr. Trump sounded an optimistic note, saying that there would be “a vaccine before the end of the year or maybe even sooner.”

The coronavirus pandemic shows little sign of abating in the United States, with nearly 6 million total cases and an average of 42,000 new daily cases. The campaign of former Vice President Joseph R. Biden Jr. noted Friday that at least 3,525 Americans had lost their lives to the coronavirus since the Republican convention began on Monday. (The New York Times counted 4,037.)

“Instead of a strategy to overcome the pandemic, or any concern for the unbearable suffering in our country right now as a result of his ongoing failures, what we heard was a delusional vision completely divorced from the crushing reality that ordinary Americans face,” Kate Bedingfield, a Biden deputy campaign manager, said.

Such numbers did not stop Mr. Trump from declaring the country’s response to the pandemic a great success.

“Joe Biden’s plan is not a solution to the virus, but rather it is a surrender to the virus,” he said. “My administration has a very different approach. To save as many lives as possible, we are focusing on the science, the facts and the data.”

The Strange Saga of TikTok

These Are the Deutsche Bank Executives Responsible for Serving Jeffrey Epstein