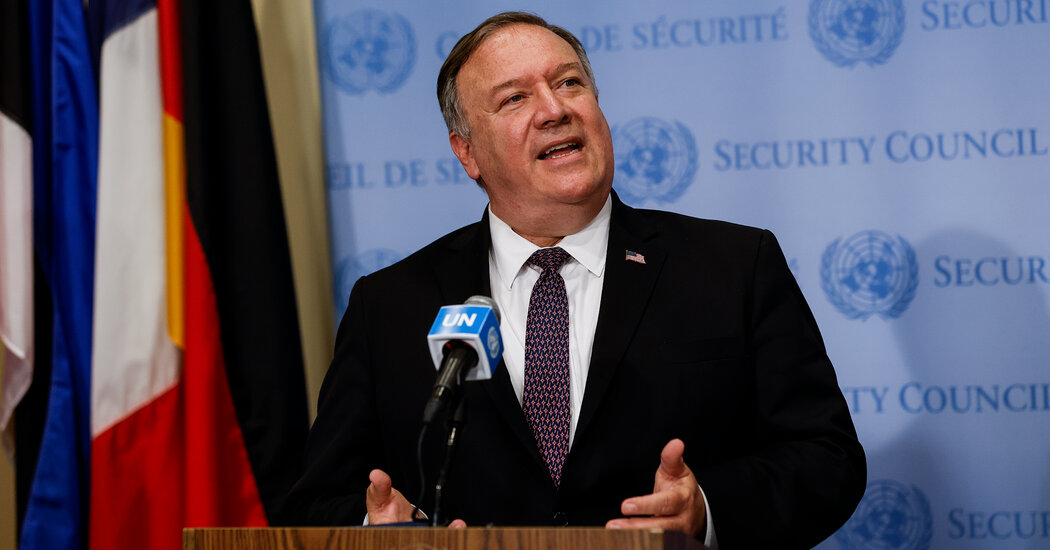 The House Foreign Affairs Committee announced on Friday that it would move to hold Secretary of State Mike Pompeo in contempt of Congress for defying its subpoenas related to the State Department’s participation in Senate Republicans’ investigation targeting the Bidens.

The move, announced on Friday by Representative Eliot L. Engel, Democrat of New York and the chairman of the panel, would amount to a rare and stinging rebuke of the nation’s top diplomat, who has drawn criticism for flouting norms of diplomatic custom in pursuit of President Trump’s political interests and his own ambitions.

Mr. Engel said he had sought records from Mr. Pompeo regarding “his transparently political misuse of department resources,” including in his recent address to the Republican National Convention from Jerusalem, but had been stonewalled in an “unprecedented record of obstruction and defiance.” The chairman said he had been told that receiving the records was contingent upon his committee agreeing to investigate the Bidens.

“He has demonstrated alarming disregard for the laws and rules governing his own conduct and for the tools the Constitution provides to prevent government corruption,” Mr. Engel said of Mr. Pompeo. “He seems to think the office he holds, the department he runs, the personnel he oversees and the taxpayer dollars that pay for all of it are there for his personal and political benefit.”

A spokesman for the State Department called the announcement “political theatrics and an unfortunate waste of taxpayer resources,” and said department officials had simply asked Mr. Engel to “explain what foreign policy issue he is investigating that requires these documents.”

As Senate Republicans escalated their efforts this year to pursue investigations into Mr. Trump’s political rivals that the president hopes to weaponize for his re-election campaign, Democrats leading the House Foreign Affairs Committee started their own inquiry, accusing Mr. Pompeo of misusing State Department resources to aid the Republicans’ investigations.

The inquiries center on unsubstantiated claims that Hunter Biden, the son of Joseph R. Biden Jr., the Democratic presidential nominee, helped a Ukrainian energy firm curry favor with the Obama administration while his father was vice president. While the State Department has provided more than 16,000 pages of documents to Senate Republicans, Mr. Engel said, it has yet to provide any information to the Democratic-led House panel, defying two separate subpoenas.

In a letter sent to Mr. Engel on Thursday, a top State Department official suggested that his committee would not receive the requested documents because lawmakers on the panel had not indicated they were interested in pursuing the claims against the Bidens.

“If you can confirm by letter that the committee is, in fact, substantively investigating identical or very similar corruption issues involving Ukraine and corrupt influence related to U.S. foreign policy, the department is ready to commence production of documents responsive to such a request,” wrote Ryan M. Kaldahl, the acting assistant secretary of state for legislative affairs.

If the committee “is not willing to request an investigation into this matter,” Mr. Kaldahl continued, “an alternative approach the department would respectfully suggest would be for you to discuss within the legislative branch your request.”

That suggestion infuriated Democrats, who likened the demand to the type of quid pro quo proposal that prompted the president’s impeachment.

“Mr. Pompeo is demanding that the committee do essentially the same thing Russia is doing,” Mr. Engel said in a statement, “spreading claims about corruption” in order to “interfere in the American presidential election.” He added, “I want no part of it.”

The announcement came the morning after Mr. Trump accepted his party’s renomination at a rally-like political event on the South Lawn of the White House, flouting the law by turning the official seat of the United States government into a partisan campaign prop, complete with signs and fireworks bearing his name. The speech capped a Republican National Convention that broke decades of norms by repeatedly blurring the lines between governing and politics, including by having the sitting secretary of state take part. That Mr. Pompeo did so from Jerusalem, mixing his diplomatic duties with partisan politics, made his participation all the more remarkable.

A subcommittee of Mr. Engel’s panel opened an investigation on Tuesday into Mr. Pompeo’s political activities during the trip.

Mr. Pompeo has previously drawn criticism for politicizing his perch at the State Department. As he mulled a run for the Senate from his adopted home state, Kansas, Mr. Pompeo, who has also weighed a presidential bid in 2024, made a series of undisclosed visits with conservative donors and allies that appeared to be linked to those plans while on taxpayer-funded trips.

In choosing to press ahead with holding Mr. Pompeo in contempt of Congress, however, House Democrats are seeking a particularly personal — if symbolic — censure. It is unlikely a contempt vote would result in a lawsuit before the November election.

The House voted in July 2019 to hold Attorney General William P. Barr and the commerce secretary, Wilbur Ross, in criminal contempt of Congress for their refusals to turn over documents related to the Trump administration’s attempt to add a citizenship question to the 2020 census.

The vote, the first time the House voted to hold a government official in contempt in a subpoena fight, formally authorized House lawmakers to take Mr. Barr and Mr. Ross to federal court to seek judicial enforcement of subpoenas for the material in question. That lawsuit, filed in November by the House Oversight and Reform Committee, is still continuing.

Unlock 5: Education Ministry issues guidelines for states, UTs on reopening of schools from...

The Big Promises Biden Is Making

How the Central Park Barber Spends His Sundays