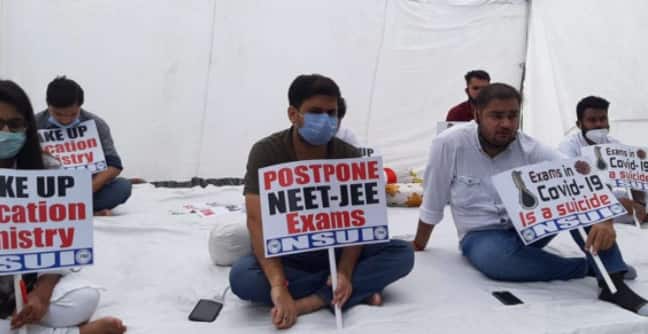 New Delhi: Even as National Testing Agency (NTA) has decided to conduct NEET on September 13 and JEE Mains for under-graduate Engineering Colleges and Institutes from September 1 to 6, false propaganda is being created in the name of students that these examinations should be cancelled in view of the coronavirus pandemic.

Ministers of six non-BJP ruled states on Friday (August 28) moved the Supreme Court against its order allowing the holding of NEET and JEE exams amid the pandemic scare, as the row over the contentious issues intensified with the top Congress leadership stepping up its offensive against the central government.

More than 28 lakh students are expected to take the National Eligibility-cum-Entrance Test and the Joint Entrance Examination for admission to medical and engineering colleges across the country. Since all these students would cast their votes for the first time in the upcoming elections, the exercise on part of these political parties seems to woo the large chunk of youth voters.

The DNA analysis also favours that the demand of students to postpone NEET and JEE exams must be given a patient hearing. The complaints have reached from the Supreme Court to the Prime Minister. The Centre has also assured them that social distancing rules will be fully followed for the safety of students.

Earlier, the Supreme Court refused to ban the examination issuing clear instructions that one year of students cannot be wasted. More than 150 academics and teachers have also written a letter to Prime Minister Narendra Modi, appealing him that it will be wrong to cancel these examinations.

Despite this, six state governments, including West Bengal, Jharkhand, Rajasthan, Chhattisgarh, Punjab and Maharashtra, filed a review petition in the Supreme Court today. Delhi government is also opposing the holding of these examinations, but it did not approach the top court.

Chief ministers in BJP-ruled Madhya Pradesh (Shivraj Singh Chouhan) and Uttar Pradesh (Yogi Adityanath), however, backed holding of these exams as per schedule. Union Education Minister Ramesh Pokhriyal Nishank said that politics should be kept away from education.

However, a campaign against the exams has also been launched on social media to create an atmosphere that all students are not interested in taking the exams. On the contrary, a large number of students busy with their studies don’t have time for Facebook and Twitter.

Through fake Twitter and Facebook accounts, fake pieces of information are being shared with old photos for cancellation of the exams. When the DNA report examined a few campaigns on social media, it came out to be fake. Many of these accounts sharing fake posts were associated with IT cells of political parties.

You can understand that political parties are least interested in the future of students but more concerned about seducing this opportunity to capitalise on the popular sentiments of students. Like in the death case of Sushant Singh Rajput, this issue is also being hyped by certain political parties to create a fake atmosphere.

Innocent viewers, sitting at their home, may fall prey to such propaganda. If we look at this issue from the opposite angle and imagine about the government decision to cancel the NEET and JEE exams amid coronavirus, the same set of people with their political masters would be seen staging protests, and through fake social media posts, stating that a precious year of students has been wasted.

Copper Won’t Save You From Coronavirus

Coronavirus Is a Crisis. Might It Also Narrow Inequality?