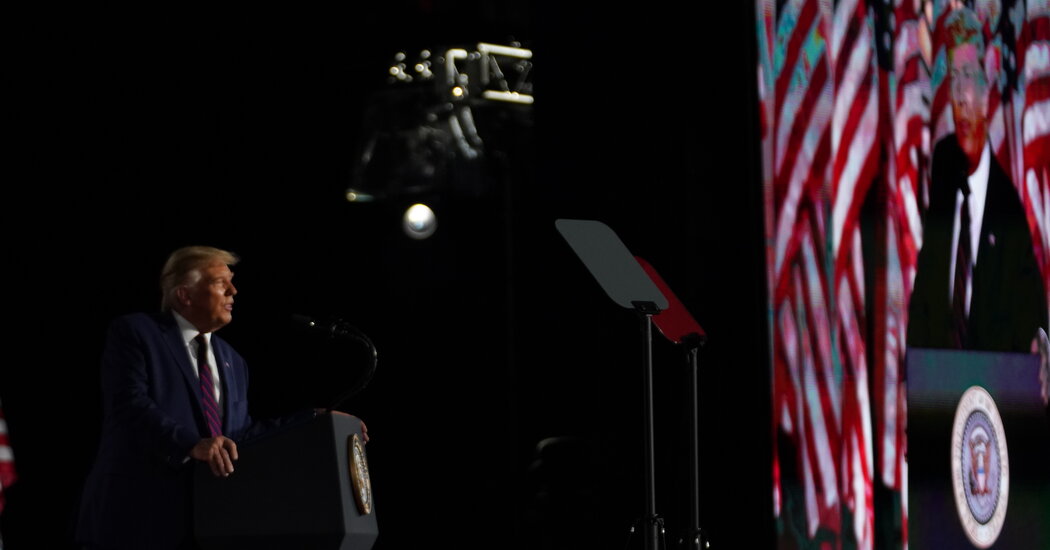 All week, speakers at the Republican National Convention have implausibly described President Trump as a caring, empathic leader who doesn’t hesitate to give his time to those in need.

But a handful of Mr. Trump’s hagiographers went even further than that — ascribing direct quotations to the president that do not track with any public statements he has made.

While there is ample reporting to suggest Mr. Trump has little patience for death — he began his father’s eulogy by speaking about himself — Representative Jim Jordan of Ohio said Mr. Trump found a reservoir of empathy for the parents of Mr. Jordan’s nephew, who had been killed in a car accident.

Kellyanne Conway, the departing White House counselor who served as a campaign manager for Mr. Trump in 2016, recounted a conversation in which Mr. Trump described drug overdoses as a “personal” responsibility.

She recalled: “When President Trump asked me to coordinate the White House efforts on combating the drug crisis, he said: ‘This is personal, Kellyanne. So many lives have been ruined by addiction and we’ll never even know it because people are ashamed to reach out for help, or they’re not sure who to turn to in their toughest hour.’”

Perhaps no story was as implausible as the one relayed by Richard Grenell, the former United States ambassador to Germany, who said, “I’ve watched President Trump charm the chancellor of Germany” — an anecdote hardly supported by reporting or photo evidence of their meetings.

But no convention speaker took as much creative license with quotations from Mr. Trump as his daughter Ivanka Trump. During her remarks introducing her father, she recalled watching on television as Alice Johnson was released from prison after he commuted her sentence.

“After a long silence, he looked at me and said, ‘Imagine how many people there are just like Alice,’” Ms. Trump said. “From that point on, he became a voice for those who had been unfairly silenced in our prison system.”

(Later in the evening, Mr. Trump highlighted his executive order demanding 10-year prison sentences for anyone convicted of tearing down historical statues and monuments, including those built to glorify Confederates.)

For all of the efforts to soften the president’s image and point to his compassion in private situations, when it came time for Mr. Trump to speak, he dismissed it as unimportant.

“The laid-off workers in Michigan, Ohio, New Hampshire, Pennsylvania and many other states didn’t want Joe Biden’s hollow words of empathy,” he said. “They wanted their jobs back.”

A Poet of Multitudes, Whose Work Feels Newly Pertinent

A religious event in Manila draws thousands, raising concerns that it might become a...

Read Arguments on Impeachment From House Democrats and Republicans

Jackie O.’s Bag of Choice, Rebranded in Her Name