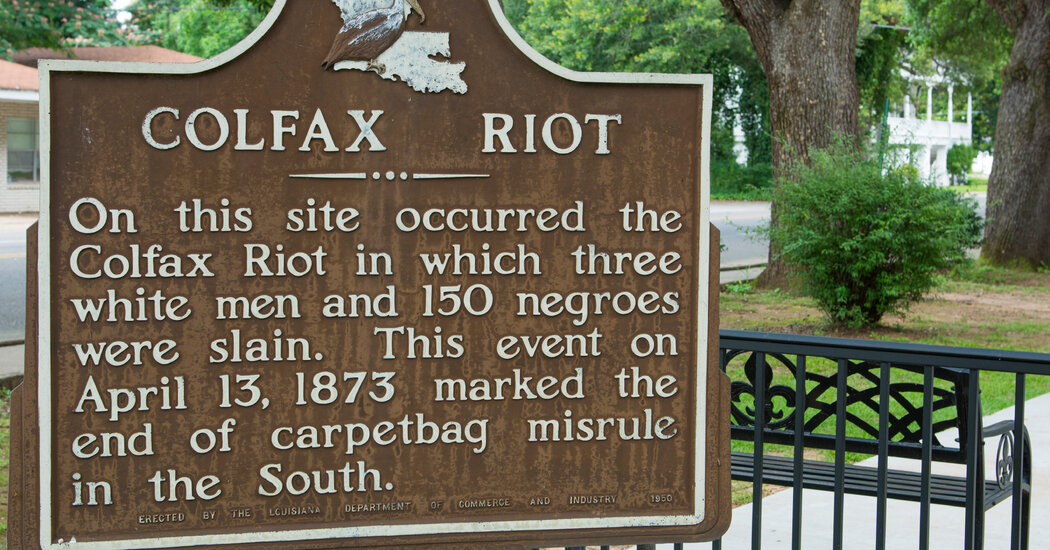 An hour after sunset on Easter Sunday in 1873, a stern-wheel riverboat put ashore at Colfax, La., a ramshackle settlement surrounded by cotton plantations on the east bank of the Red River. Rain was falling. As passengers disembarked, they found themselves stumbling in the dark over what turned out to be the lifeless bodies of African-Americans who had been freed from slavery eight years earlier at the conclusion of the Civil War.

Most of the dead were lying facedown in the grass “and had been shot almost to pieces,” according to Charles Lane in his book “The Day Freedom Died: The Colfax Massacre, The Supreme Court, and the Betrayal of Reconstruction.” Others had been bludgeoned or mutilated, and some had burned to death. Flames rose from the ruins of the parish courthouse. The stench of charred human flesh was inescapable.

As Americans debate the merit of tearing down monuments to founding fathers, a monument to the men who massacred Black Americans in Colfax 147 years ago stands unopposed and largely unnoticed. Two blocks off Main Street, a 12-foot marble obelisk is the focal point of the Colfax cemetery. An inscription carved into its base declares it was “erected to the memory of the heroes” who “fell in the Colfax Riot fighting for white supremacy.” On the north side of the present-day courthouse, a historical marker reads, “On this site occurred the Colfax Riot in which three white men and 150 negroes were slain” and added that the episode “marked the end of carpetbag misrule in the South.”

These memorials to the perpetrators of mass murder are disturbing enough in their own right. But the impact of the Colfax massacre extended far beyond this flyspeck town. The damage is still felt acutely throughout our entire nation, and the tragedy must not be forgotten.

After the Civil War, Colfax became ensnared in a vicious political melee between abolitionist Republicans who supported Reconstruction and recalcitrant, pro-slavery Democrats determined to redeem the Lost Cause of the Confederacy. The 13th Amendment (ratified in 1865), the Civil Rights Act of 1866 and the 14th Amendment (ratified in 1868) promised to give Black Americans freedom, citizenship and the same protections and privileges afforded other citizens.

But those promises vanished as Southern states not only refused to enforce these laws, but also passed new laws such as the so-called Black Codes intended to derail Reconstruction. The Ku Klux Klan, founded in 1865, joined other white terrorist groups devoted to the “better preservation of the white race and to see that white blood was handed down unmixed with the offensive globule of African blood.”

Open season was declared on Blacks throughout the South. According to an investigation by Gen. Philip Sheridan in 1875, “2,141 Negroes had been killed by whites in Louisiana and 2,115 wounded” since the end of the Civil War, yet no one was punished for those crimes.

The 1872 elections in Louisiana were mockeries — rife with voter intimidation, ballot stuffing and violent obstruction of Black registration. Republicans and Democrats alike claimed victory in the governor’s race, candidates from both parties held inaugurations, and both candidates began making state and parish appointments. In February 1873, a federal judge settled the governor’s race by declaring the Republican candidate the winner.

The election mayhem spilled over into Colfax, seat of Grant Parish, where Republican candidates, sympathetic to Black freedmen, assumed their rightful offices in the parish courthouse. This provoked a homicidal revolt by supporters of the Democratic candidates. Several hundred heavily armed white supremacists from throughout Louisiana traveled to Colfax bent on taking control of the courthouse, prompting local freedmen to gather in the brick building and defend it from attack, even though they were vastly outgunned.

When the white mob advanced, the murderous frenzy of their assault prompted the Black men to raise a flag of surrender, but the berserk marauders ignored it. They set fire to the courthouse roof and slaughtered almost every freedman who emerged from the flaming building to surrender. Those who remained inside were burned alive. The exact number of victims was never determined.

The Colfax massacre was ghastly, and so was its aftermath. A young, white New York lawyer named J.R. Beckwith had recently been appointed U.S. attorney for Louisiana; he got the job of prosecuting the Colfax murders. Beckwith’s 150 pages of indictments listed 32 counts and named 98 defendants. After six months, with no help from the federal government he represented, Beckwith had managed to arrest only seven of the defendants. The first trial, in March of 1874 in New Orleans, featured an eloquent and capable Beckwith doing battle against an all-star team of white-supremacist trial attorneys. It resulted in a hung jury.

In the retrial a few months later, a federal jury found just three defendants guilty of conspiring to violate the civil rights of the victims. A U.S. Supreme Court justice, Joseph P. Bradley, who opposed the abolition of slavery and despised Reconstruction, had participated in the first days of the retrial as a second judge while riding circuit, as justices did in those days, then departed. But three weeks after the trial was over, he came back to New Orleans and overturned even the minimal conspiracy verdicts. The split decision sent the case, U.S. v. Cruikshank, to the Supreme Court.

In March 1876, Bradley and his fellow Supreme Court justices decreed that he was correct in rescinding the convictions of William Cruikshank and the other white defendants, ruling that although the 14th Amendment gave the federal government authority to act against violations of civil rights by state governments, it did not apply to acts of racist violence by private citizens against other citizens. Furthermore, the court ludicrously declared, the prosecution failed to show that crimes against the murdered Black men were committed “on account of their race or color.” All 98 defendants escaped accountability, emboldening white supremacists across the land.

The Cruikshank decision reinforced a grotesque judicial precedent that severely limited the power of the federal government to prosecute violent crimes against the formerly enslaved. Given free rein by the Supreme Court, white supremacists continued their coordinated campaign of terror against Black people, hastening the demise of Reconstruction. By 1877, every Southern state had been “redeemed,” and they would remain under the control of their white redeemers for decades.

By eviscerating crucial protections of the 14th Amendment, the Cruikshank ruling ensured that the most basic constitutional rights of Black citizens would be denied well into the 20th century. The crabbed, inhumane logic of Cruikshank provided legal cover that allowed systemic racism to flourish and denied civil rights to millions of Americans, perpetuating what John Lewis called a “soul-wrenching, existential struggle.”

A straight line can be drawn from Colfax and Cruikshank to the race riots in East St. Louis in 1917 and in Omaha, Chicago and other cities two years later; to the abhorrent crimes committed in the 1921 Tulsa race massacre; to the criminal brutality unleashed on African-Americans in Selma and Birmingham, Ala., in the 1960s; to the present-day instances of police and white nationalist violence in Ferguson, Mo., Charlottesville, Va., and now Kenosha, Wis.; to the shameful, plain-sight attempts to suppress the Black vote in the 2020 elections. Lest we forget that white supremacy and racial injustice are still endemic in America, we need to remember Colfax and the lasting harm it wrought.

William Briggs is an emeritus professor of mathematics at the University of Colorado, Denver, and author of “How America Got Its Guns: A History of Gun Violence in America.” Jon Krakauer is the author of numerous books, including “Into Thin Air” and “Missoula.”

How the World Is Learning to Live With a Deadly Pandemic