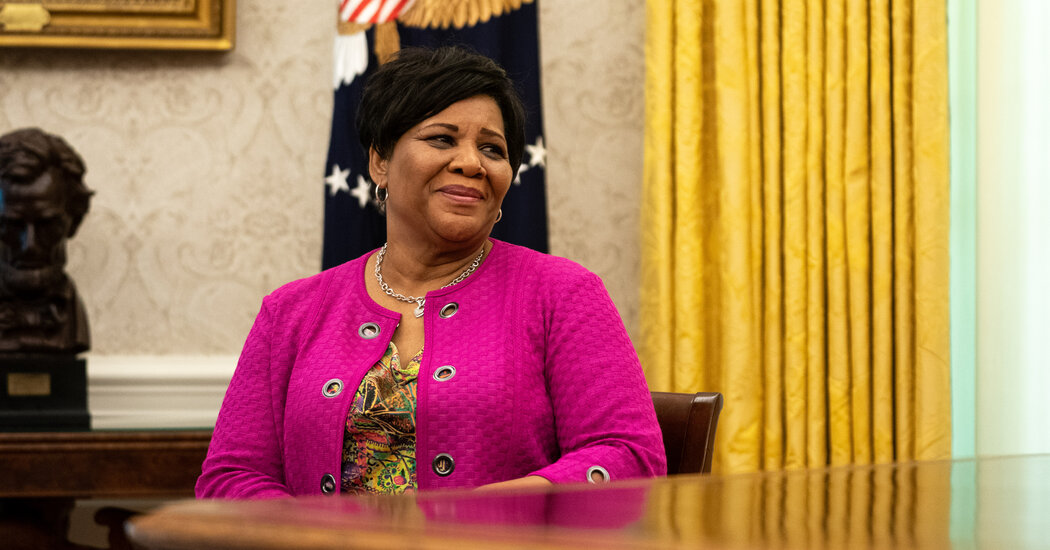 WASHINGTON — President Trump employed his power of clemency on Friday for the second time this week in connection with his nominating convention, issuing a full pardon for Alice Marie Johnson, a onetime drug convict, a day after she appeared in a campaign video praising his leadership.

Mr. Trump had already commuted Ms. Johnson’s sentence in 2018, but he said he decided to elevate the action to a full pardon after seeing her in the audience at the White House on Thursday night when he delivered his speech at the Republican National Convention accepting nomination for a second term.

“You were out there, I saw you in the audience last night, and I asked the folks if you could bring Alice over,” the president told her during a hastily arranged event in the Oval Office. “We’re going to give a full pardon. We’re going to do it right now. That means you have been fully pardoned. That’s the ultimate thing that can happen. That means you can do whatever you want in life and just keep doing the great job you’re doing.”

The pardon came only three days after he pardoned Jon Ponder, a convicted bank robber who now runs a nonprofit organization for prisoners, in an act captured on videotape and then shown that evening at the convention. Critics complained that Mr. Trump was brazenly using the power of his office to stage an event for a partisan political gathering, while the White House said it was legal because it was an official event shown on a government website and the campaign then used video that was available to the public.

Ms. Johnson, who had been locked up in federal prison in Alabama since 1996 on charges related to cocaine distribution and money laundering, has become a national symbol of the move to reduce what many in both parties view as excessive sentences for nonviolent drug crimes. Her case was originally brought to Mr. Trump’s attention by Kim Kardashian West, and she has become a vocal supporter of the president, whose campaign highlighted his commutation of her in a Super Bowl ad in February.

In her Republican convention speech aired on Thursday, Ms. Johnson hailed Mr. Trump as a caring man who intervened to stop an injustice. “What I did was wrong,” she said. “I made decisions that I regret. Some say you do the crime, you do the time. However, that time should be fair and just. We all make mistakes. None of us wants to be defined forever based on our worst decision.”

Speaking at a lectern with a “Trump Pence 2020” sign on it at the Andrew Mellon Auditorium where other convention speakers also addressed the country, she continued: “When President Trump heard about me, about the injustice of my story, he saw me as a person. He had compassion and he acted.”

The commutation Mr. Trump issued in 2018 reduced Ms. Johnson’s sentence and freed her without wiping out her conviction. The pardon he gave her on Friday does not signify innocence, but removes any civil limits imposed because of her conviction, like restrictions on the right to vote or sit on a jury. It may also be helpful in obtaining licenses or employment.

“A pardon is an expression of the president’s forgiveness and ordinarily is granted in recognition of the applicant’s acceptance of responsibility for the crime and established good conduct for a significant period of time after conviction or completion of sentence,” the Justice Department says on its website in explaining the difference from a commutation.

In a statement provided to a reporter before the convention, Ms. Johnson credited Mr. Trump with hearing her story. “What has stood out to me most about the president is how he lit up when I told him the story of being reunited with my family,” she said. “I could tell he was touched by the joy it brought me and my family and that he was proud of the decision he had made to give me a chance at redemption.”

But while Mr. Trump has used his clemency power in select cases, nearly all of the people who have received pardons or commutations were celebrities or people known to him personally or known to people around him. Those who apply through the normal process at the Office of the Pardon Attorney at the Justice Department have not gotten the president’s attention. While more than 13,000 petitions are pending, Mr. Trump has granted only 36 pardons and commutations, according to the latest statistics on the department website.

If Storms Hit California, Blazes May Be Tougher to Control