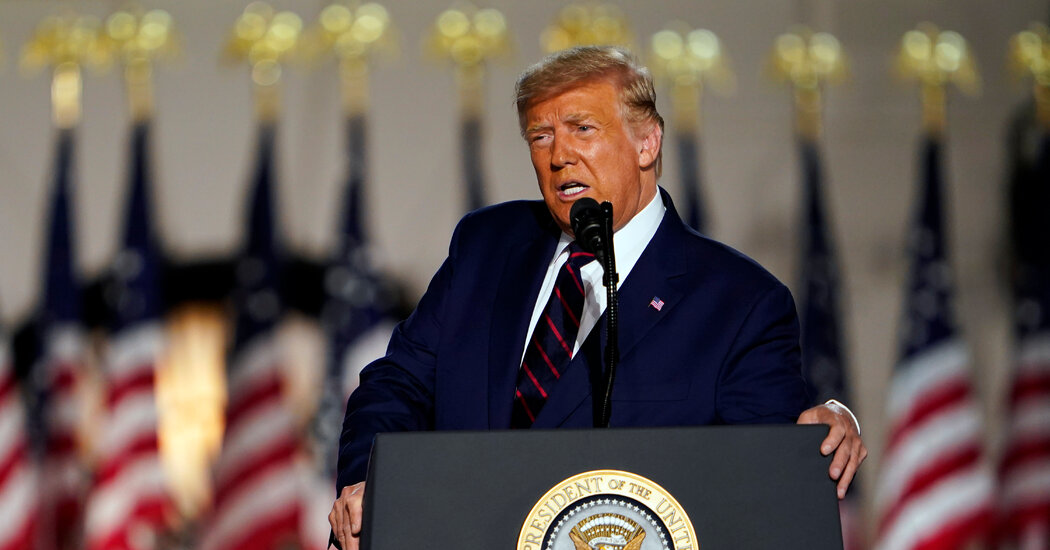 When President Trump sought to paint an apocalyptic portrait of big-city crime as out of control at the Republican National Convention Thursday night, he turned to two fellow New Yorkers to help him make the case.

Mr. Lynch pointed out that nearly 1,000 people had been shot and almost 300 killed in New York so far this year. “Why is this happening?” Mr. Lynch asked. “The answer is simple: The Democrats have walked away from us.”

Continuing the attack, Mr. Giuliani warned the country to avoid his hometown’s mistakes. “Don’t let the Democrats do to America what they have done to New York,” he said.

But the truth about crime — in New York and other urban centers — is complex. Overall crime remains at a generational low across the United States, despite the surge this summer in shootings and murders, criminologists say, and the underlying causes of the wave of gun violence are hard to pin down.

Here is what we know.

Crime is up in New York, but still remains low

There is no doubt that shootings and murders have increased sharply in New York since last year, and that many of the killings have been tragically senseless. As Mr. Giuliani noted, one recent victim was Davell Gardner Jr., a 1-year-old boy who was fatally shot at a cookout in Brooklyn in July as he was sitting in his stroller.

As of last week, according to police statistics, there had been 280 murders in New York this year, a 35 percent increase over last year. Shooting incidents have also spiked to 955 so far this year, 87 percent more than during the same period last year.

But the surge in violence has arrived amid a 2 percent drop in overall reports of all major crimes, the police say. Rape reports, for instance, are down 25 percent, and grand larceny has dropped 20 percent.

The spike in killings and gun violence also comes after seven years of record-breaking calm when murders dipped to below 300 one year — 2017 — for the first time since the 1950s. That milestone was reached under Mayor Bill de Blasio, the Democrat whom both Mr. Lynch and Mr. Giuliani have blamed for the rise in crime.

“Rudy Giuliani, who did so much to systematically divide this city and created so much pain, has no validity as someone to speak to this moment in history where people are demanding racial justice,” he said.

The causes of the rise are unclear

Police officials in New York have linked the rise in shootings to the state’s new bail law — which vastly increased the number of criminal defendants who could be freed before trial without the possibility of bail — and to an emergency effort to release hundreds of inmates from the city’s jails to curb the coronavirus crisis.

But criminologists say the rise in violence can be attributed to the advent of summer, always a high-crime season and especially difficult this year because of the economic and psychological strain of the pandemic and the civil unrest over police brutality.

And a recent analysis by city officials of police department data seemed to point to a different cause for the rise in violence: The number of arrests the police have made for gun crimes in New York has plummeted.

Other big cities have seen a similar pattern this year: Murders and shooting have risen sharply — often from record lows — while the overall rate of major crimes has dipped slightly.

During the first six months of the year, overall crime was down 5.3 percent in 25 large American cities relative to the same period in 2019, with violent crime down 2 percent. But murders rose in these 25 cities by 16.1 percent over the previous year.

Murders were up about 22 percent in Chicago in the first half of the year, and 44 percent in New Orleans.

The trend is not limited to cities controlled by Democrats. In Tulsa, for example, where the mayor is a Republican, the police recorded 12 homicides in June 2020, compared to four in June 2019.

Even with the increase in murders, however, the mayhem in cities does not begin to rival the high-crime era of late 1980s and early 1990s. The murder rate in New York this year is about where it was in 2012 and well below all eight years when Mr. Giuliani was mayor.

Richard Rosenfeld, a criminologist at the University of Missouri-St. Louis, said that crime this summer has not spread across cities in the same way it did 30 years ago. It appears to be concentrated in poor neighborhoods. “Cities are not awash in crime,” he said.

In his speech, Mr. Trump attacked his opponent, Joseph R. Biden Jr., for wanting to abolish cash bail, saying hundreds of thousands of criminals would immediately be loosed into the country’s streets and neighborhoods.

But some places that have ended cash bail have in fact experienced a drop in violent crime. Crime fell in New Jersey, for instance, in the two years after that state ended cash bail, with murders and robberies decreasing by more than 30 percent, according to a report by the state court system.

In New York, the bail law that went into effect in January did not abolish bail for the most serious and violent crimes. But it did do away with cash bail for most nonviolent offenses, requiring judges to impose the least restrictive measures necessary to ensure people return to court.

About 90 percent of defendants in New York now go home before their trials, up from about 75 percent under the old law, according to an analysis by the John Jay College of Criminal Justice.

Still, the city’s own analysis of arrests suggests that the bail law has had little to do with the rise in violence. Shootings in New York stayed relatively stable for more than four months after the law went into effect. They began to increase in May during the coronavirus crisis and continued to rise after the eruption of protests connected to the death of George Floyd in Minneapolis, the analysis found. The police have said that they deployed officers to crowd control during the protests, drawing them away from regular crime-fighting duties.

‘I Feel Sorry for Americans’: A Baffled World Watches the U.S.

Win or Lose, Trump Will Hold Power Over the G.O.P.