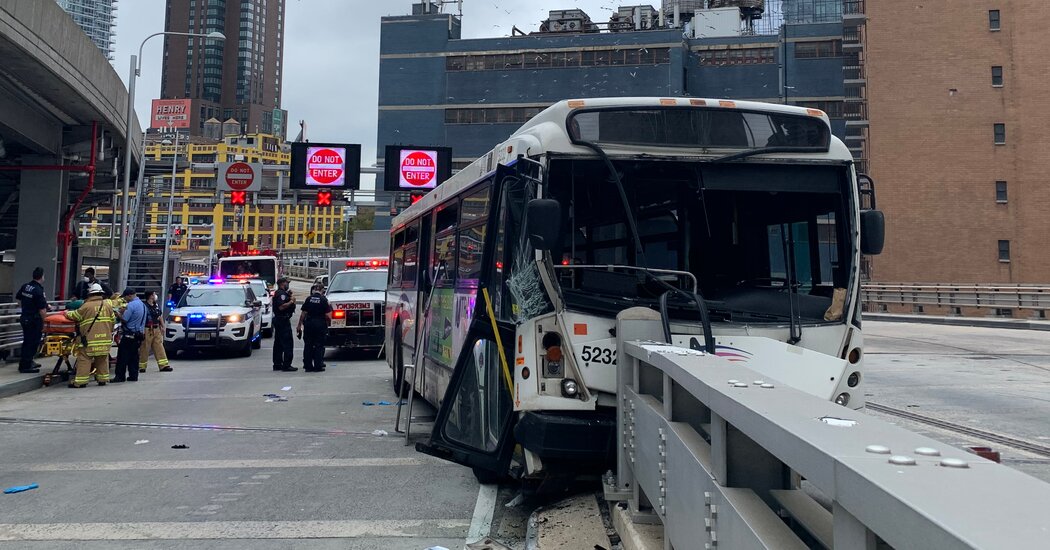 At least 14 people were hurt, one critically, in a bus crash on a ramp near the Port Authority terminal in Manhattan on Saturday morning, the authorities said.

Eleven people were taken to hospitals and three were treated at the scene after the bus struck a barrier on the ramp at 39th Street and Ninth Avenue around 9:30 a.m., the Fire Department said.

Multiple people were found on the ground outside the bus and passengers were trapped inside, said Kevin Ramdayal, a Fire Department deputy chief.

Emergency responders had difficulty entering the bus because of “major damage to the front end” of the bus, he said.

One person, found inside the bus, was in “severely critical” condition, he said. The others hurt had injuries that were not life-threatening.

The bus, operated by New Jersey Transit on the 156 line, was headed to the Port Authority terminal from Fort Lee, N.J., according to Lisa Torbic, a spokeswoman for N.J. Transit.

She said nine people, plus the driver, were on the bus at the time. It was not clear why fire officials and N.J. Transit had different figures for those on board. It was also not clear if another vehicle was involved in the accident.

By 10:30 a.m., paramedics were seen rolling down two empty gurneys and ambulances were seen pulling away.

The intersection near the Port Authority terminal where the crash occurred is one of the busiest in the city.

During rush hours, buses and cars cram the streets surrounding 39th Street and Ninth Avenue trying to get into and out of the bus depot, the Lincoln Tunnel and the nearby theater district.

A man who works as a bus park attendant nearby said he heard a loud boom above him. Usually crashes happen on the streets below, so the source of the crash seemed unusual, he said.

Biden Campaign Says Just Over a Third of 2020 Staff Members Are People of...

How the Coronavirus Is Transforming July 4 in Los Angeles