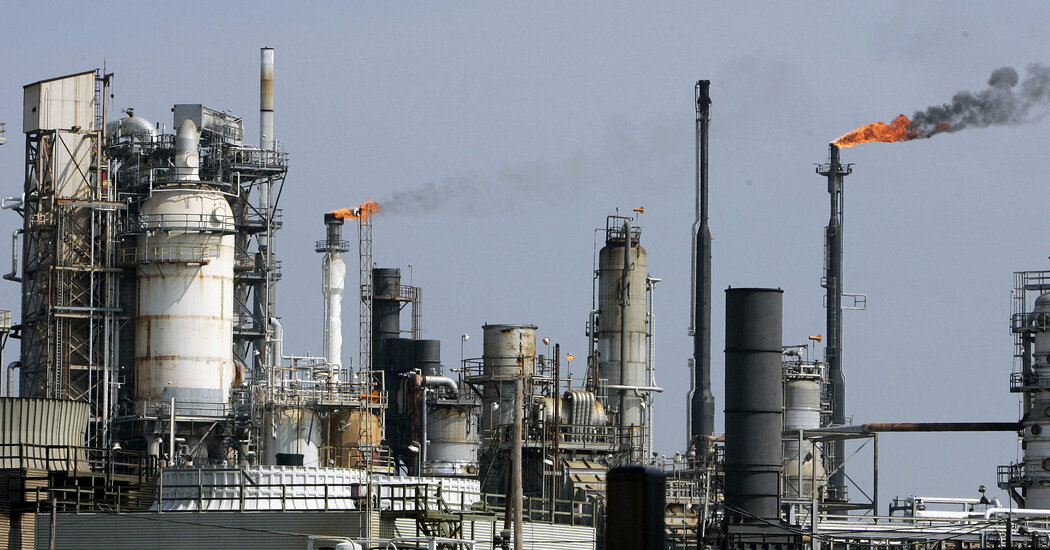 HOUSTON — Laura has come and gone, and the Houston region has survived another near miss. But the disaster the city nearly faced this week raises important issues of national flood policy, environmental protection and national security.

Galveston Bay, including the Houston Ship Channel, the Bayport industrial complex and the Texas City industrial complex, includes seven major oil refineries and several hundred chemical plants. At this time, much of this complex is vulnerable to storm surge higher than 15 feet and all facilities would experience serious damage with a surge exceeding 18 feet, a level predicted to occur with either a Category 4 or 5 storm.

On Wednesday, in advance of the storm making landfall, The Houston Chronicle warned that Hurricane Laura was approaching Level 5 status as it neared the Louisiana-Texas border.

Similar vulnerability exists in other cities on the Gulf Coast: Corpus Christi, Port Arthur, Beaumont and Orange, Texas; Lake Charles, La., where Hurricane Laura caused widespread destruction and led to a fire in a chemical plant; Baton Rouge and New Orleans, La.; and Mobile, Ala.

The potential environmental and economic damage associated with the inundation of these facilities is staggering. If a Category 4 or 5 storm came ashore near the south end of Galveston Island, it would cause the worst environmental disaster in United States history, and could deal another staggering blow to the U.S. economy and national security, because of the potential loss of military grade jet fuel production.

In its continuing studies to design protection for these facilities, the methodology used by the Army Corps of Engineers substantially restricts the size of storm to be used in the design of protection structures. This methodology is outdated, does not adequately address the environmental and economic risks associated with such storms and does not factor in climate change and its impact on storm intensity.

By contrast, the Nuclear Regulatory Commission accounts for extreme surges in its safety guidance for nuclear plants. The commission has been doing this since 2012, after the Fukushima disaster, when it issued a letter recommending that an estimation of low-risk surges be incorporated into the design and permitting of nuclear power plants.

The comparison of these policies with those currently used by the Army Corps of Engineers is revealing. The nuclear agency evaluates the hurricane surge for a plant near Bay City, Texas, and concludes that it would have to design for a surge of more than 30 feet above sea level.

By contrast, the coastal spine, a set of 14-foot-high barriers and a two-mile-wide gate structure designed by the Army Corps of Engineers to protect the Galveston Bay system (an area comparable to Bay City) is meant to protect against a 17-foot surge at the coast — insufficient for the surge generated by either a Category 4 or Category 5 storm. Indeed, with a category 5 storm, over 100 separate chemical plants or refining facilities would be flooded, assuming the construction of the $20 billion coastal spine federal project.

Additional measures could and should be added to this coastal spine to offer protection to the level recommended by the Nuclear Regulatory Commission. Specifically, an internal line of defense that my colleagues and I have proposed — the Galveston Bay Park Plan — could be added and, with the coastal spine, would provide protection adequate to a 30-foot surge level. However, the Army Corps of Engineer’s cost-benefit methodology does not currently allow construction at this level of protection.

If this region wants the Galveston Bay Park Plan to be built, it would require financing through local or state government bonds, or other types of new financing vehicles, such as social impact bonds. Therefore, providing this level of protection will depend on leadership from our city and state elected officials.

For all these reasons, only with an extraordinary effort will we be able to come up with a better way to protect these facilities. Instead of having a national policy of trying to prevent horrible environmental disasters, our current policy assures that such destruction will occur. We are spending significant sums of money on inadequate protection that creates a false sense of success and security.

It is time that this issue of adequate surge protection be addressed nationally. I have lived on the Texas coast with the risk of this horrific event all my life, watching near miss after near miss. But with climate change increasing the frequency of storms and the speed at which they intensify, we cannot depend on the models and methods of the past.

The harm from such a surge would be unbelievable. Research from my colleagues at Rice University indicate that a 24-foot surge would cause the failure of storage tanks that would release a volume of nearly 90 million gallons of oil and hazardous substances. All of this would flow into adjacent neighborhoods and then into Galveston Bay, the second most productive estuary in the United States.

This time, the Houston region was fortunate. Laura went elsewhere, and although the damage to other parts of the Gulf Coast was terrible, it wasn’t the catastrophe I feared. I sincerely hope that this time the reality of what could have happened will cause us to rethink our concepts of acceptable risk, take our changing climate into consideration and protect our key ecological and economic resources.

Jim Blackburn is a professor at Rice University and the co-director of the university’s Severe Storm Prediction, Education and Evacuation from Disaster Center.

Why Is Trump attacking the International Criminal Court?

Rubber Bullets and Beanbag Rounds Can Cause Devastating Injuries

A Long Trip, a U.S. Open Bubble and a Terrible Luck of the Draw

M.L.B.’s Botched Return Could Be a Warning for the N.F.L.