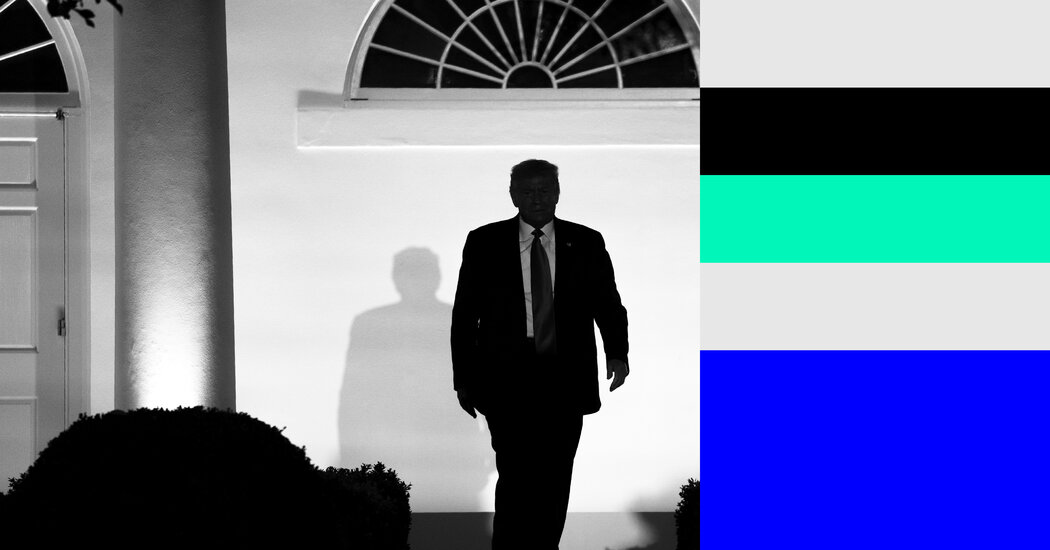 Even as President Trump accepted the Republican presidential nomination on the White House lawn, lawbreakers rampaged through the capital.

Would our law-and-order president leap off the podium and tackle them? He once said he would race unarmed into a building to tackle a school shooter. But sadly he ignored these blatant lawbreakers, presidential aides violating Hatch Act restrictions on political manipulation of government.

It’s one law he doesn’t want to uphold. Asked about the Hatch Act, the White House chief of staff, Mark Meadows, scoffed, “Nobody outside of the beltway really cares.”

Inside the beltway, Trump and other speakers at the Republican National Convention conjure grave national threats from raging anarchists.

“Your vote will decide whether we protect law-abiding Americans, or whether we give free rein to violent anarchists, and agitators, and criminals,” Trump warned in his acceptance speech.

The Republican convention included video glimpses of “Biden’s America,” with a scary scene of fire raging in the streets. But those streets turned out to be in Barcelona, Spain; it wasn’t “Biden’s America” or even America at all, just another in a stream of lies. (By the count of The Washington Post, Trump has uttered more than 20,000 false and misleading statements since taking office.)

Of course, even if it had been filmed in America this year, it wouldn’t have been Biden’s America, but Trump’s America. The real Biden’s America, the period when he was vice president, was a time of comparative calm, growing prosperity and improving health care.

Yet Trump is determined to terrify Americans. “If you want a vision of your life under a Biden presidency, think of the smoldering ruins of Minneapolis, the violent anarchy of Portland, the bloodstained sidewalks of Chicago,” Trump warned earlier.

It’s true that there has been violence and looting in some American cities, and this is a genuine challenge to order and economic recovery. But by any objective measure the bigger risk comes from right-wing extremists.

The anti-fascist protesters known as antifa have committed violent acts but aren’t known to have ever killed anyone, while right-wing extremists have killed hundreds. Just a few days ago, a Trump supporter, Kyle H. Rittenhouse, allegedly shot two protesters dead in Kenosha, Wis. One can’t help wondering if Rittenhouse, an impressionable 17-year-old living in Illinois, was galvanized to take a gun and drive to Kenosha because of panic promoted by Trump and Fox News.

After fulminating about threats from Black Lives Matter protesters, Tucker Carlson of Fox News seemed to defend the Kenosha killings, saying, “How shocked are we that 17-year-olds with rifles decided they had to maintain order when no one else would?”

At the Republican convention, Vice President Mike Pence warned voters, “You won’t be safe in Joe Biden’s America,” and cited a federal officer, Dave Underwood, “killed during the riots in Oakland.” But the man charged with killing Underwood was Steven Carrillo, a follower of the extremist right-wing Boogaloo movement.

I covered the Portland protests and was duly tear-gassed by the federal agents dispatched by Trump to create violent street scenes. Sure, Portland had a genuine problem with protest violence, but it was inflamed by Trump — and those leftists who did throw rocks or set fires played into the hands of Trump, even as they damaged their own city.

I asked Gov. Kate Brown of Oregon what she thought of Trump turning the state into a punching bag.

“He has nothing else,” she said. “He has to scare the bejesus out of people.”

“This is all about distraction from his appalling failure to provide a national response” to Covid-19, she added.

“Don’t let Democrats do to America what they’ve done to New York,” Rudy Giuliani, the former New York City mayor, pleaded in his convention speech. Hmm. Let’s just note that there were 319 murders in New York City last year under Democratic leadership; when Giuliani was mayor, the lowest annual total was 649, under a police commissioner who later went to prison.

Oh, and two Giuliani associates were indicted last year on federal campaign finance charges, and he reportedly is himself under criminal investigation. What distinguishes this White House on law and order is simply its ties to criminals: Eight associates of Trump have already pleaded guilty or been convicted of crimes since he took office.

Even as Trump exaggerates threats from “anarchists,” there are plenty of legitimate threats to the public that he ignores. Climate change raises the risk of forest fires, drought, intense hurricanes and flooding. And the coronavirus is claiming American lives at the rate of more than one every 90 seconds — yet Trump simply pretends to have defeated the virus, defying the need for masks and social distancing.

“The most basic duty of government is to defend the lives of its own citizens,” Trump said in his 2016 convention speech. “Any government that fails to do so is a government unworthy to lead.” That’s a fair point that Trump voters should consider: His missteps contributed to the 180,000 American deaths from the coronavirus; Trump is one reason the United States has 4 percent of the world’s population and 22 percent of coronavirus deaths.

There’s nothing new about politicians trying to scare the public. The present fear-mongering recalls Nixon’s Southern Strategy. Two years ago, Trump and Fox News tried to win Republican votes in the midterm elections by manufacturing fears of an invasion by Central American caravans; predictably, the issue disappeared as soon as voting ended.

“This is an old game that the Trump campaign is playing,” said Daniel Ziblatt, a Harvard scholar and co-author of “How Democracies Die.” “It is out of the authoritarian’s playbook.”

Professor Ziblatt said he doubted that scare tactics would win over many voters, but he fears that the alarmism may activate fans in the Trump base to take the law (and guns) into their own hands. “That is terrifying,” Ziblatt added.