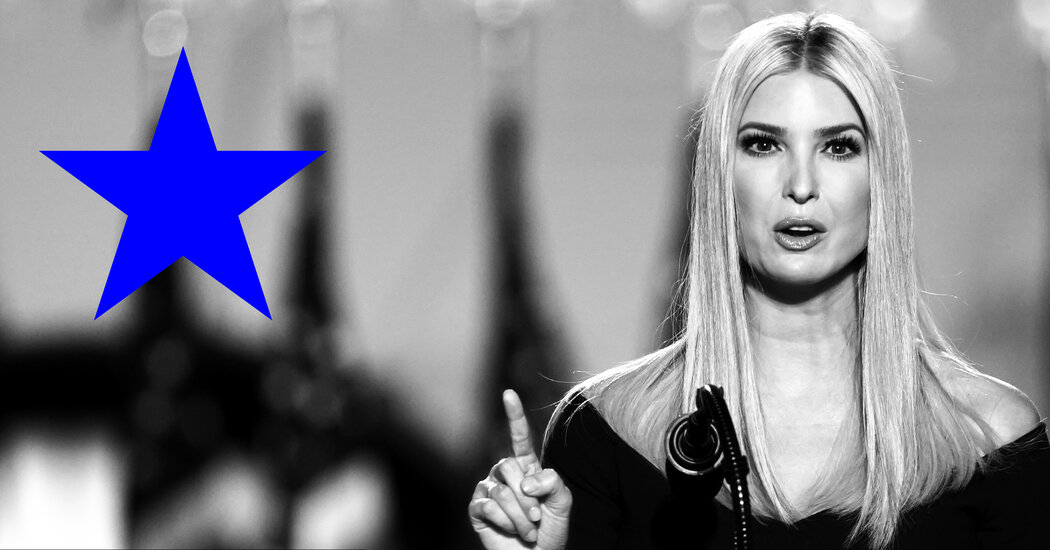 WASHINGTON — As long as the Trumps were hijacking the White House for their convention finale, they may as well have built a golden escalator from the Truman Balcony to the South Lawn.

That way, Ivanka could have made her power move with true Trumpian flair. In every other sense, she went for it. With her blond mane rippling, she was full-on MAGA, shoving the amped-up Don Jr. and fortissimo Kimberly Guilfoyle out of the way and positioning herself as the heir to her father’s political dynasty.

The night was so Borgia, it made sense to end it with opera. (Or they could have just played the “Succession” theme song.)

The old joke that if Trump became president, he’d slap his name on the White House almost came true during the egomania jubilee, when fireworks spelled out the name “Trump.”

Ivanka must realize now that she and Jared can never go back to their life as New York society darlings. So why not double down on Washington and lay the groundwork for a presidential run of her own?

Now that her father has turned the Republican Party into a political machine bearing her last name, she must feel entitled to jump into the driver’s seat when papa is done with it.

Her speech Thursday night was about him but it was also pointedly about “I.”

“Four years ago, I introduced to you a builder …” “Tonight, I stand before you …” “When Jared and I moved with our three young children to Washington, we didn’t exactly know what we were in for …” “I’ve seen in Washington, it’s easy for politicians to survive if they silence their convictions …” “I couldn’t believe so many politicians actually prefer to complain …” “I was shocked to see …” “I am more certain than ever before …” “I’ve been with my father …” “I sat with him in the Oval Office …” “I was with my father when …” “I promised that …” “I said that Americans needed …”

“Four years ago, I told you I would fight alongside my father, and four years later, here I am.’’

Yes, there she was, daddy’s little girl, on her imaginary escalator. The pungent aroma of the S.N.L. Ivanka perfume, “Complicit,” wafted across the lawn on the balmy night. All the dynamics that make Donald Trump’s administration, and the way he runs the country, so chaotic — the backbiting, the warring factions, the grifting, the neglect, the power grabs — were echoed in the family portrait on display this past week.

The most dramatic tableau Thursday night was not the president’s somniferous speech, but Ivanka’s scorching moment with the Day-Glo-garbed Melania.

After her speech, the first daughter strode past the first lady to greet her father. Melania, who had first smiled broadly at Ivanka, suddenly went stony.

The exchange was particularly loaded given the context: Melania’s former BFF and aide, Stephanie Winston Wolkoff, is beginning to dish on her new tell-all about the first lady, which includes accounts of conversations in which Melania mocks Ivanka.

It has been reported that Melania calls Ivanka “the princess” — Trump singled out his favorite child in his convention speech — and Ivanka has reportedly called Melania “the portrait.”

After many tugs of war, Melania has resigned herself to the fact that Jared and Ivanka run the White House. The basic view in the building is that Ivanka has wrestled Melania to a draw.

Wolkoff writes that Melania was so annoyed by her stepdaughter’s attempts to, as she saw it, infringe on her role in planning the Inauguration that she launched “Operation Block Ivanka.”

“Melania was not thrilled about Ivanka’s steering the schedule and would not allow it,’’ Wolkoff writes in a New York magazine excerpt. “Neither was she happy to hear that Ivanka insisted on walking in the Pennsylvania Avenue parade with her children.’’

The Portrait decided to try to exclude the Princess from the portrait — the “special moment” of the swearing-in.

“Yes, Operation Block Ivanka was petty,’’ Wolkoff writes. “Melania was in on this mission. But in our minds, Ivanka shouldn’t have made herself the center of attention in her father’s inauguration.”

On Ivanka’s other flank is Don Jr., who was never as favored by their father but who has morphed from family dunce to one of Trumpworld’s most effective battering rams.

Junior, as Jason Zengerle writes in The New York Times Magazine this week, “is wagering that by going all in on his father’s presidency and the tribal passions it has unleashed, he can claim his own durable place in American politics.” He has come to represent “the emotional center of the MAGA universe,’’ Jason Miller, a Trump campaign adviser, told Zengerle.

The convention speeches from Trump’s other children, Tiffany and Eric, lacked the sort of warmth and affection seen in the sweet and personal video of Joe Biden’s granddaughters.

The Trump kids’ speeches could have been given by anyone, they were so devoid of humanizing anecdotes.

Even worse, they were trying to sell a version of Donald Trump that was a total fiction. The plan, with the family and other speakers, was to push the idea that Trump is caring and informed behind the scenes — “colorblind and gender neutral,’’ as Ivanka said at the last convention.

As W. did at his convention in 2000, Trump offered a panoply of Blacks and Latinos — though some of them have said they did not know they were going to be a part of the Trump convention. With W., you could look out at the audience and see the falsity of it, since the audience was full of white fat cats. Republicans were fortunate that for the first three nights, they did not have an audience of delegates, donors and apparatchiks that would pull the curtain back on the party’s hypocrisy; though you could see a front row of white fat-cat men during Thursday’s speeches at the White House.

“We all know Donald Trump makes no secrets about how he feels about things,’’ Melania said. “Total honesty is what we as citizens deserve from our president. Whether you like it or not, you always know what he’s thinking.’’ And that, she said with a straight face, is because he’s “an authentic person.”

It was impossible for this to ring true, given that the president’s own sister was heard describing Trump in secret recordings made by his rogue niece, Mary Trump, as “a brat” and a liar with “no principles.” (Or, as Trump’s children would say, a totally honest people’s champion with strong convictions.)

In New Hampshire on Friday night, the president considered his dynastic possibilities. “I want to see the first woman president also,” he said, but called Kamala Harris “not competent.”

How to Volunteer or Donate to Help Others This School Year

Kolkata family forced to stay with 70-year-old`s dead body for 2 days after authorities...