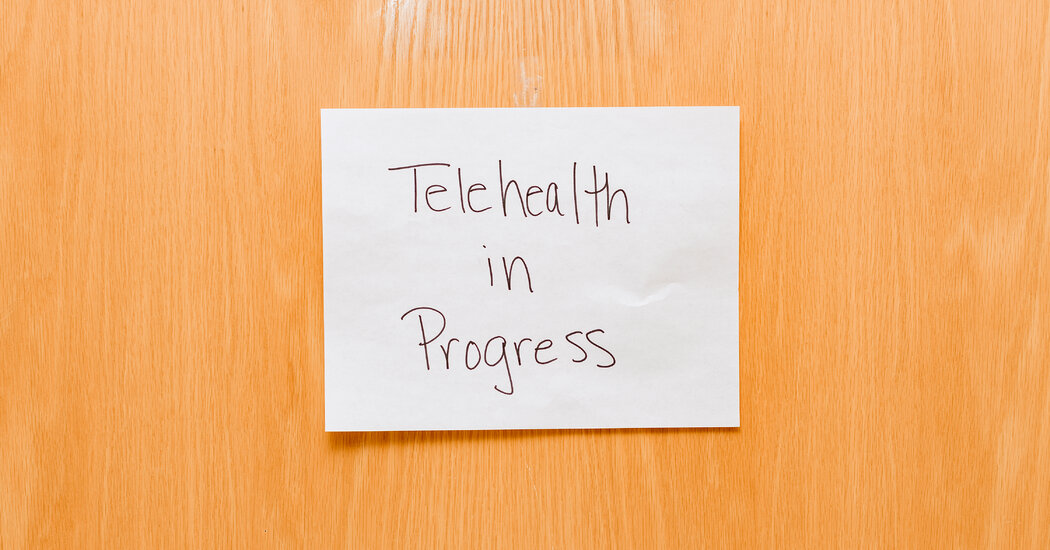 For about two years, Michael Raymos made the drive from Modesto, Calif., to Sacramento and back for therapy, and for the therapist, who could listen to stories of childhood abuse and gently unwind their hold on the present. Those regular office sessions, at a clinic at the University of California, Davis, created a strong bond, and Mr. Raymos came to rely on them to manage symptoms of post-traumatic stress and the emotional weight of a neurodegenerative disorder that struck him in 2012, in the prime of adulthood.

But this routine ended abruptly in mid-March, when the clinic went almost entirely virtual in response to the Covid-19 outbreak in Northern California. Since then, Mr. Raymos has engaged in twice-a-month sessions on his computer or phone.

“There is a drop of social contact, not being able to always see his expression,” said Mr. Raymos, 49. “There’s more of an intimacy level when you’re one on one and that office door is closed. But there’s a comfort level at home. I’ll sit there in bed with my dog, Bug, on my lap, and that comfort allows me to talk about things I maybe wouldn’t have in the office, because of how painful they are.”

He added: “And I like not having to make that drive.”

The coronavirus pandemic has forced medical centers around the world to partially adopt telemedicine, with varying results. Some patients are not comfortable with the technology, or can’t afford it; others need services that cannot be provided entirely online, like prenatal care.

Psychiatry is a special case. Experts had predicted for years that the field’s most intimate treatment — psychotherapy, or the talking cure — was poised to go largely virtual, for many or most patients, forever altering day-to-day practice. In this extraordinary year, they are likely to be proved right.

In March, federal health officials loosened restrictions on practicing across state lines, and have begun to expand reimbursement. Clinics across the country went virtual, with most consultations done by phone or computer. The number of virtual mental health visits in the sprawling V.A. Health System jumped more than sevenfold, from 7,500 to 52,600, in just the first two months of the U.S. epidemic.

“Overnight, everyone began practicing telepsychiatry, with physicians in New York, Texas, California, able to reach their patients, wherever they were,” said Dr. John Torous, director of the digital psychiatry division at Beth Israel Deaconess Medical Center, a Harvard affiliate.

“You’re going to get a boost in access in care, for sure,” he said. “And I suspect it’s going to saturate the system pretty quickly.”

The U.C. Davis clinic had a built-in advantage in the transition: Its senior psychiatrist, Dr. Peter Yellowlees, in 2018 co-wrote the standard textbook on telepsychiatry, “Telepsychiatry and Health Technologies.” He also helped write the field’s guidelines and has conducted dozens of studies on the practice. He has been a proponent since 1991, when, as a young psychiatrist in Australia, he treated his first patient on telepsychaitry, an Aboriginal woman with depression. At the end, she asked if he had recorded the session; he assured her he had not.

“She said,’ ‘Why not?’” Dr. Yellowlees recalled, in an interview. “She was disappointed. She wanted a copy; she said that she’d never been on TV before and wanted to show her community. It taught me about people’s attitudes. Patients have always liked being treated on video — it’s the providers and physicians who were the major obstacles.”

Many Freudian-based therapists have been particularly skeptical, concerned that going virtual might alter or weaken a therapeutic bond built, often painstakingly, through the shared physical space of analysis. Others worry that a rich dimension of body language is lost in video interactions.

“In terms of trauma, one of the things many of us track is micro-expressions, these flickers of emotional tone, when people are talking,” said Dr. Andres Sciolla, a psychiatrist in the U.C. Davis clinic. “I cannot tell you how many times I have noticed a flicker of tears or fear in the gaze of a patient, perceived a shift in feeling, and explored that — and found a lot behind that change.”

If widely used approaches such as cognitive-behavior therapy lose something crucial by being virtual, it is not evident from the studies done so far. In one study, for instance, a team led by researchers based at the Baltimore Veterans Affairs Medical Center tracked more than 100 veterans being treated for depression over six months, half of them engaging in traditional, in-person therapy, the other half receiving care online. Both groups improved, on standard measures, by the same amount. Another study, led by Leslie Morland of the Department of Veterans Affairs, Pacific Islands Healthcare System, compared in-person and virtual talk therapy for 120 veterans with post-traumatic stress. It reached a similar finding: improvement across the board, no difference between the groups.

“The evidence so far from these equivalency trials, comparing face-to-face versus over video — every trial I’ve seen shows no difference in clinical outcomes,” said John Fortney, director of population health in the University of Washington’s psychiatry department. For more than a decade, Dr. Fortney has been trying to get telepsychiatry and telepsychology adopted in rural areas, where people have little or no access to mental health specialists. “About 90 percent of patients report being satisfied with the experience,” he said.

And with the threat of coronavirus at large, safety has become a paramount concern.

“My psychiatrist literally saved my life, about 10 years ago, when I had a couple of suicide attempts,” said Margaret, 70, a retired nurse, who, like Mr. Raymos, received in-person care at the U.C. Davis clinic and had to go virtual in March. “I know how powerful those office visits can be. But I don’t want to go out. I don’t want to be exposed to this virus; I like that I can do this from home. My therapist, I feel his personality online; that still comes through. He’s listening very carefully. He’s really present to me.”

Not everyone who could benefit from psychiatric care is a candidate for the virtual variety. For people who are deeply delusional, who are scared, paranoid and alone, for instance, a Zoom call in these situations can be an invitation to confusion, or much worse. The rich sensory experience of full human interaction with a gifted therapist — that quality that defies measurement and study, in any randomized trial — is what many such people need.

But for now, in this moment of shared anxiety and uncertainty, the seal on telepsychiatry has broken. Psychiatric clinics may never look the same. Clients, not doctors, will choose where they want to be when receiving the talking cure, and which supports to have at hand, whether a pet on the couch, an Al Jarreau mix playing in the background or a cold beer.

“From clinical point of view, you can often learn more over video than in person, because you see people moving in their natural habitat, where they live, maybe how they interact with others,” Dr. Yellowlees said. “My office, by contrast, is not a neutral space. Your home is your space. It’s more egalitarian, less stressful. And potentially you can turn the device off and end the session, if you really wanted.”

Shifting Dynamics of the Mideast Pushed Israel and U.A.E. Together