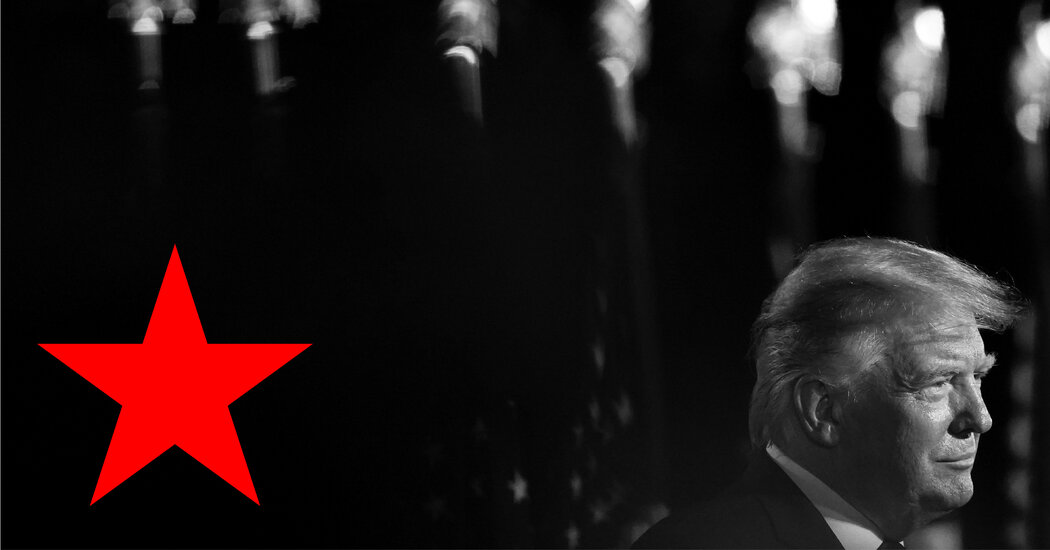 I’m so relieved that the pandemic is over! I’d somehow missed that news, but then I watched the Republican National Convention, culminating in President Trump’s big speech, and learned that with his swift, muscular action, he’d pretty much vanquished the “China virus.” I learned that the economic toll of it was fast receding and would be a blurry memory soon.

I learned that it’s now perfectly safe for hundreds of people to sit cheek by jowl without masks, because that’s what they did in order to bathe the president in applause and chants of “four more years.” I learned that anyone who says different is just being a hater. But Trump is a lover. I learned that, too.

How to reconcile that with the viciousness of much of his remarks, which were as grounded in reality as a Tolkien novel and about as long? I’m stumped.

But I’m impressed: that he claimed such big-heartedness while showing such small-mindedness; that he twisted facts with such abandon and in such abundance; that he again trotted out that nonsense about having done more for Black Americans than any president since Abraham Lincoln; that he disparaged Joe Biden for not “following the science” about Covid-19 when he, Trump, mused about injections of bleach and vouched recklessly for hydroxychloroquine.

It was an astonishing performance. But then it was astonishing convention, reinventing Trump so thoroughly that I half expected him to show up for his climactic remarks with the physique of a man half his age and a whole new head of hair. If he and his minions are going to fabricate his record and character, inserting a saint in his place, why not do the same with his appearance, inserting a stud?

Trump gave a middle finger to precedent and propriety simply by delivering his convention speech at the White House. Then he went further by smugly reveling in his own naughtiness. He milked the magisterial setting for all it was worth, appearing first with Melania on a balcony, then taking an eternity to descend a curved staircase with her, then musing aloud on the noble history of the residence.

Even that wasn’t enough. Deep into his remarks, he revisited the wonder of the setting, turning from the lectern to admire it and then, back at the microphone, taunting Democrats. “We’re here and they’re not,” he said.

This wasn’t patriotism. It was puerility.

And the contrast with Biden’s convention speech a week earlier couldn’t have been starker, because the contrast between the two men can’t be. If I hear one more disgruntled, Biden-blasé Democrat tell me that he and Trump are almost equally unappealing, my head will explode. The difference between four more years of Trump and four years of Biden is everything, and their approaches to their speeches almost perfectly demonstrated that.

Biden spoke in a rueful voice for a humble 24 minutes. Trump spoke in a belligerent one for a grandiose 70.

Biden never uttered Trump’s name. Trump sure as hell uttered Biden’s, over and over, and a few of Trump’s attacks demonstrated one of his superpowers, which is smearing opponents along the very lines where he’s most flawed and vulnerable. He suggested that he had special intelligence that China was rooting and possibly working for a Biden victory because, in Trump’s words, “China would own our country if Joe Biden got elected.” Did he mean the way Russia rooted for his victory and seems to own him?

He also accused Biden of betraying blue-collar workers as he “gave them hugs — and even kisses.” The “kisses” prompted laughter from people in the audience, who clearly heard what Trump surely intended: an allusion to some women’s stories about Biden. But those accounts pale, in number and severity, beside the accusations of sexual assault by Trump and his “Access Hollywood” confession of grabbing women “by the pussy.”

Still, Trump went there. He’ll go anywhere. And a shockingly large number of Americans will follow him.

He also insisted that he had kept all his promises. Really? How’s that wall coming, Mr. President? And will Mexico’s payments for it be made in installments or one lump sum?

He said precious little about the pandemic, except to blame it all on China, and he most certainly didn’t mention that we’re No. 1 in the world in recorded deaths (more than 180,000) and in reported infections, which are quickly nearing 6 million. He had different figures, ones that painted us as the envy of other countries. Gee, then why aren’t they letting Americans visit? Is that just sour grapes?

I wrote in a previous column that this convention was defined by its shamelessness, which President Trump’s speech certainly exemplified. I gave short shrift to its illogic.

He did tell Americans to look long, hard and fearfully at recent scenes of lawlessness and violence in some cities for a glimpse of Biden’s America. But, wait, isn’t this Trump’s America? The unrest is happening on his watch, so how does keeping him in office protect America from it?

It takes a vacuum of integrity to sell such bunk with such righteousness. It takes a Trump.

Like Ivanka! Introducing her father, she bragged that he, unlike those icky career politicians, didn’t “kick the can until it was someone else’s problem.” Did she mean a can like the national debt, which he promised to curb but which ballooned monstrously during his first term, even before the pandemic came along?

Ivanka achieved a norm-busting double whammy by not only shilling at the White House but deciding that it was OK as a federal employee to make a nakedly partisan speech at an expressly partisan event, much as Kellyanne Conway and Mike Pompeo and Ben Carson before her had done. It was another trailblazing moment for America’s princess, who can put a picture of it in her photo album alongside portraits of her and the president with Kim Jong-un in the Demilitarized Zone.

At least the convention is over. Except it’s not. The fictions that it trafficked in, the hypocrisy on display, all those Trump progeny and progeny-in-law — they’re with us through at least Nov. 3. Pray like you’ve never prayed that it’s not much longer than that.

Pakistan continues to foment `culture of violence` at home, across its borders: India at...

Al Downing, the Pitcher for Home Run No. 715, Reflects on Hank Aaron