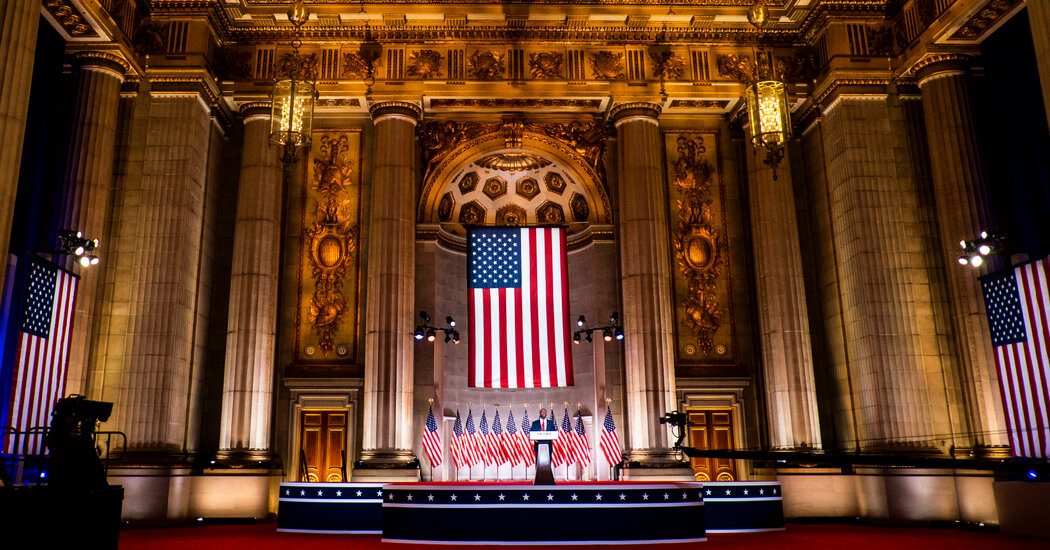 The second night of the Republican National Convention kicks off Tuesday evening, a day after speakers including Senator Tim Scott of South Carolina, former Ambassador Nikki Haley, Donald Trump Jr., and others painted a disjointed portrait of their Democratic opponents and the country.

At times, the tone was dark — as speakers warned of a supposed societal collapse if Joseph R. Biden Jr. was elected to the White House and if Democrats won sweeping victories in Congress. Mr. Scott and Ms. Haley, two Republicans who are rumored to be eyeing a 2024 presidential run, sought to weave their jabs at liberals with a more traditional message of inspiration and small government.

Tuesday night’s lineup features an eclectic blend of speakers, including three members of Mr. Trump’s immediate family. The message will most likely tread similar ground: that November’s election is a crossroads for the country, and that re-electing President Trump is a moral necessity.

The first lady, Melania Trump, will anchor the evening, and two of the president’s adult children — Eric Trump and Tiffany Trump — will also speak.

Similar to Monday night, which featured a video message from the St. Louis couple who gained viral fame after pointing a gun at protesters, Tuesday’s lineup also features a veteran of internet mudslinging: Nicholas Sandmann. Mr. Sandmann was the high school student whose interaction with a Native American protester went viral online and drew immediate condemnation. But later, new camera angles revealed that Mr. Sandmann was not antagonizing the protester as initially thought, and he has since become a hero of conservative media.

Other speakers will include Secretary of State Mike Pompeo; former Attorney General Pam Bondi of Florida; and Gov. Kim Reynolds of Iowa. Mr. Pompeo’s appearance in particular has been criticized as outside the political bounds of a cabinet figure whose post is often associated with apolitical diplomacy.

A television feel? Or rally speeches?

The stark contrast in tone and message between the Democrats and Republicans was not the only thing on display Monday; there was also their different approaches to hosting a convention that has been upended by the coronavirus outbreak. While Democrats leaned in fully to the television format, having actresses serve as the evening’s moderators and producing several slick videos to thread between speeches, the first night of the Republican convention had the feel of one of Mr. Trump’s signature rallies — just with no live audience. Rather than taped remarks, almost all Republicans gave live speeches in Washington, D.C. There was less pre-preduction besides a video narrated by the actor Jon Voight, which was repeated twice in the first night’s broadcast.

During one segment, Mr. Trump seemed to take a play from the Democratic convention a week prior, holding round tables with Americans who had been affected by the coronavirus and another with former hostages and detainees freed by Mr. Trump’s administration. Except, while the Democrats’ listening sessions with Mr. Biden were highly choreographed and conducted virtually, Mr. Trump’s was freewheeling and in person. Conservatives have bragged on holding more live speeches, saying they believe it will give Americans a more authentic experience. It could be, however, that they are trying to hold on to a format that doesn’t translate as well to the small screen.

Does Wisconsin come up?

Republicans have tried to pitch the protests about Black Lives Matter and police brutality against Democrats, casting protesters as violent actors seeking to destroy America. In the past 24 hours, they have added a new talking point: the fires and destruction that took place in Kenosha, Wis., after police officers were captured on camera shooting a Black man named Jacob Blake multiple times in the back.

On the first night of the convention, Republicans falsely said that Mr. Biden wanted to defund police departments and that he encouraged rioters actions throughout the country. Republicans could refresh that argument with the shooting of Mr. Blake and try to force Mr. Biden into a corner between his progressive flank that wants him to embrace systemic policing reform and moderates that want him to avoid it.

In previous instances, Mr. Biden has shrugged off these attempts at driving a wedge. The Biden campaign has repeatedly said he does not support police abolition or defunding police departments. He has expressed sympathy for Black victims of police violence and said officers should be held accountable.

How to Protect Your Family’s Privacy During Remote Learning