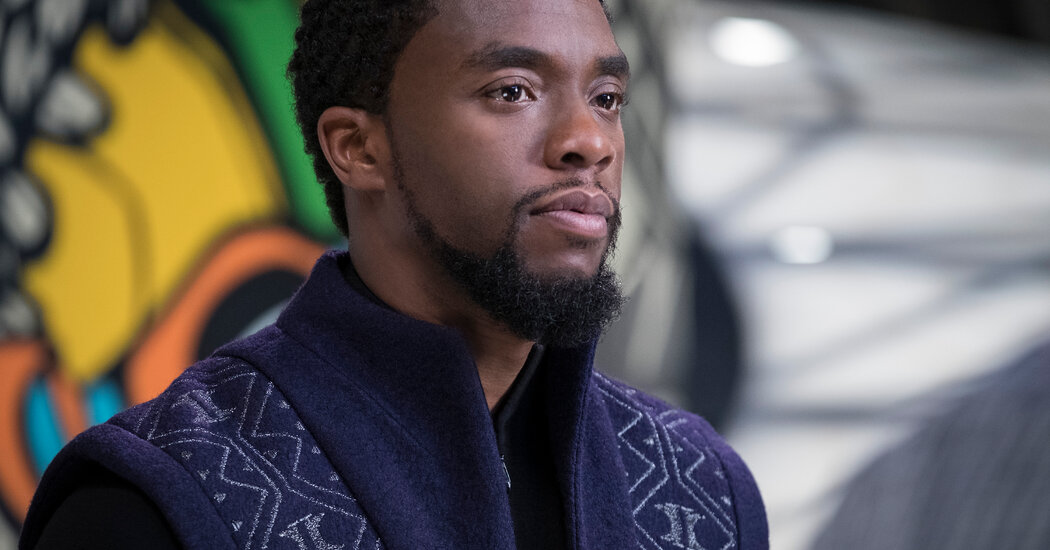 Chadwick Boseman, the actor who died Friday at 43, made his mark as a Hollywood leading man in just seven short years.

After appearing regularly on series television in one-off and recurring roles, his big-screen breakthrough as Jackie Robinson in the 2013 biopic “42” started a remarkable run of iconic Black characters — real ones like Robinson, Thurgood Marshall and James Brown, and imaginary ones like his best-known, Black Panther.

Explaining how he humanized these heroes, he told The Times’s Reggie Ugwu last year: “You have to hold it all in your mind, scene by scene. You’re a strong Black man in a world that conflicts with that strength, that really doesn’t want you to be great. So what makes you the one who’s going to stand tall?”

Here’s a look at six of his best big-screen performances:

Rent or buy on Amazon, Google Play, iTunes or Vudu.

This biopic directed by Brian Helgeland focused on the years before and after Robinson became the first Black baseball player in the Major Leagues. Though the Times co-chief critic A.O. Scott found the movie “blunt, simple and sentimental,” he also wrote that Boseman imbued the player with “sly charm and a hint of stubborn prickliness.” Read the review.

This biopic, from Tate Taylor (“The Help”), takes a more expansive approach to its subject’s life, following James Brown from his hardscrabble childhood in South Carolina to worldwide stardom with setbacks and occasional bitter moments along the way. The musician was “portrayed indelibly” by Boseman in this “viscerally explosive” movie, Stephen Holden wrote in The Times, making it a critic’s pick. Read the review.

Rent or buy on Google Play, iTunes or Vudu.

Boseman cemented his status as Hollywood’s go-to biopic star with this drama about Thurgood Marshall as a civil rights lawyer in the years before he joined the Supreme Court. Focusing the film on the case of a Black chauffeur and butler accused of raping a wealthy white woman, Reginald Hudlin “seamlessly directed,” the Times co-chief critic Manohla Dargis wrote, while Boseman and his co-star Josh Gad proved to be “natural showmen who never step on each other’s moment; they’re fun to watch.” Read the review.

The smash hit that made Boseman a household name. He stars as the title superhero, alter ego of the unflappable leader of the futuristic African nation Wakanda. In the director Ryan Coogler’s hands, the story is filled with “intense face-offs involving questions of ancestry, identity, the African diaspora, the new world and the old,” Dargis wrote, while Boseman’s “magnetism” underlies a “more physically restrained” performance that has “splashier, freewheeling moments.” Read the review.

Boseman’s New York homicide detective is at the center of this action thriller about a police conspiracy and a hunt for killers that involves blockading all the bridges out of Manhattan. Under Brian Kirk, making his feature directing debut, “it’s big, blunt, battering ram of a movie but it’s not dumb,” wrote the Times critic Jeannette Catsoulis, and the acting is “unimpeachable.” Read the review.

Though Boseman will appear in the Netflix adaptation of “Ma Rainey’s Black Bottom,” this is the last of his performances you can see for the time being. Spike Lee’s drama follows Vietnam War veterans on a quest to find, among other things, the remains of their squad leader, Stormin’ Norman, played by Boseman in flashbacks. That casting choice, A.O. Scott wrote in making the film a critic’s pick, “underlines the heroism of the character, who is stamped with the likeness of Jackie Robinson and T’Challa.” Read the review.

White House and Democrats at an Impasse on Stimulus Talks