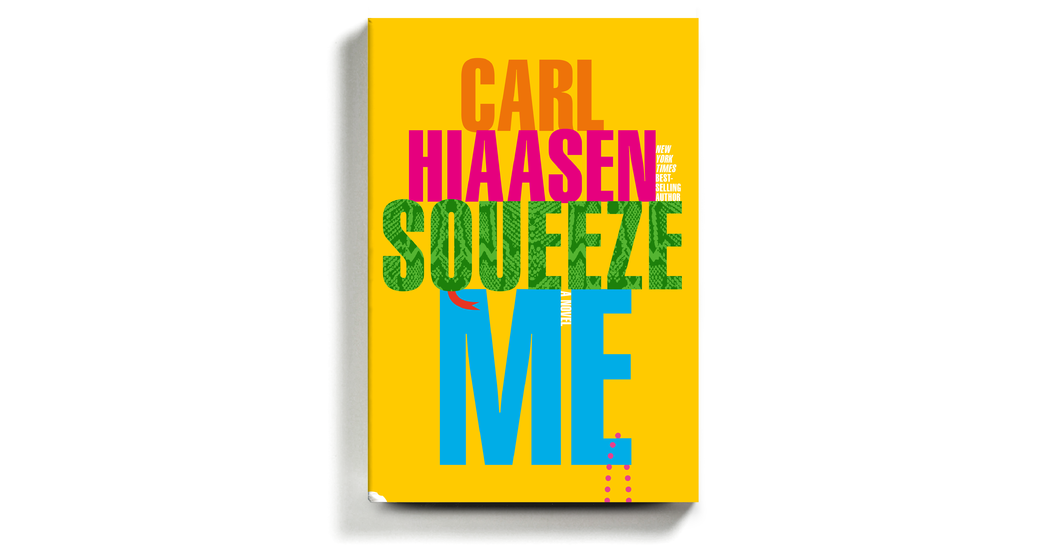 Back in 2016, when reality TV stars were still funny, Carl Hiaasen wrote a book, “Razor Girl,” taking aim at some. They were the Nance brothers, an ersatz crew of bayou types who actually came from a wealthy Milwaukee suburb and had to be coached to sound like Cajuns (except for the racial and ethnic slurs, which they had down pat). The book holds up even though its “Duck Dynasty” muses have moved on.

Happily for Hiaasen, and for his readers, Florida has since handed him targets even bigger. His latest novel, “Squeeze Me,” pairs an author who knows every grift, con and critter in the Sunshine State with some of its finest specimens. He has taken note that Palm Beach now houses a reality TV star who is also a president, along with his country club and his wealthy loyalists, one of whom is promptly swallowed by a Burmese python as an amuse-bouche for readers. Look at yourself. If you are wearing a MAGA anything, you won’t like this book.

But if you could use some wild escapism right now, Hiaasen is your guy. In its themes and its wild imagination, “Squeeze Me” offers some familiar pleasures, akin to a Greatest Hits collection. Anyone who’s read him will know what a prime recommendation that is. The edible socialite may be new, but reptiles like the python have long slithered through Hiaasen’s vision of Florida as a refuge for the worst of humankind. This book full of superrich bigots may have his highest count of nice fauna and awful people.

The Palm Beach in these pages is painted as a warped society page’s worth of funny names (“the McMarmots”), sources of ill-gotten gain (aerosols) and gala-worthy organizations. With “the IBS Wellness Foundation, a group globally committed to defeating Irritable Bowel Syndrome,” the “globally” and “defeating” give the organization its particular eau de Hiaasen. So too do a smattering of Warren Zevon lyrics in the prose, and the way a woozy Kiki Pew Fitzsimmons totters out of the IBS gala and into a “spleen-shaped” pond, never to be seen undigested again.

The book trespasses gleefully on presidential turf: All of this chaos transpires right near Casa Bellicosa (as the author has renamed the winter White House), and is much too close for the administration’s comfort. Casa Bellicosa is formidable. Hiaasen’s heroine dreams about being summoned there and having to sign an N.D.A. not to reveal that she has seen the commander in chief without his hair.

She is Angie Armstrong, a feisty critter removal specialist who is summoned to the “Stars-and-SARS” benefit for an unusually high fee of $2,000. Angie gladly liberates any unwanted wildlife, and South Florida keeps her hopping. She generally doesn’t ask too many questions. But a gigantic nonpregnant snake with a significant lump does pique her curiosity.

Angie is a tonic, as Hiaasen’s heroines tend to be. Although he must have completed this book long before the current lockdowns began, Angie’s long drives, time outdoors, openness to adventure and ability to stop in endless restaurants and watering holes offer some of the book’s true vicarious pleasures. She is eventually involved with most of the Casa Bellicosa personnel who make the life of the president — or “Mastodon,” as the book’s Secret Service detail calls him — the trial that it is.

“Squeeze Me” takes its name not only from the python but from the first lady, whose mischievous Secret Service name is Mockingbird. She is having a torrid affair with the agent assigned to her as a bodyguard, hence the squeezing. The book has trouble doing much more with her as a character, perhaps because Hiaasen sees the real first lady as trifle-proof, but more likely because his options are limited. He makes her lonely and neglected, gives her an unfaithful husband and links her to Kiki — or “Kikey,” as Mastodon keeps pronouncing it — in a suitably preposterous way.

Angie thinks of herself as apolitical. “It didn’t seem to matter who was in power,” Hiaasen writes for her. “Nothing got better in the besieged, breathtaking world she cared about most.” That’s always been the bottom line for an author whose biggest concern is the destruction of Florida as a natural paradise, without much caring about who has allowed it to happen.

But this book does make time for some topical plotlines. Its villains frame an illegal immigrant for Kiki’s demise, let Palm Beach take up an ugly battle cry against him and look the other way while Casa Bellicosa draws on well-hidden illegals for its staffing. Hiaasen has always been a genial satirist — at one point here, he describes a character “trying to score narwhal tusk in Palm Beach’s tight-knit underground E.D. community” — but “Squeeze Me” shows he can also be plenty tough when it counts.

Don’t Let Amazon Get Any Bigger