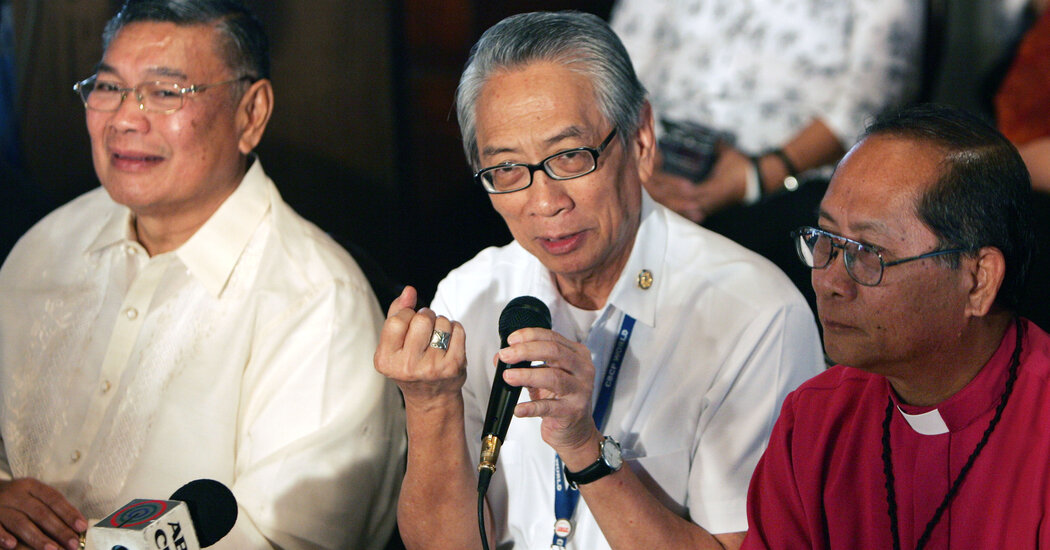 MANILA — Archbishop Oscar Cruz, an outspoken senior Philippine Catholic Church leader who railed against illegal gambling and challenged politicians with stinging commentaries, died on Wednesday at a hospital in metropolitan Manila. He was 85.

The cause was complications of the coronavirus, the church said.

Archbishop Cruz, a former president of the Catholic Bishops’ Conference of the Philippines — a powerful institution in the predominantly Catholic country — used his influence to direct attention to social ills.

Senator Francis Pangilinan described the archbishop as an “activist who fought against corruption and other wrongs of society, not just from the pulpit but on the streets with the people.”

“Archbishop Cruz was a humble servant who lived out what he preached — justice, equality, and compassion for the needy,” he added.

When Rodrigo Duterte was running for president in 2016, Archbishop Cruz said the famously foul-mouthed politician was dangerous and “worse than a dictator.” (Mr. Duterte won the election and has since led a campaign against drugs that has left thousands dead.)

The archbishop, who was also a canon lawyer, turned a sharp eye against not just the government, but also the church itself.

“He went after grafters in government and confronted the bigger challenges by looking into misconduct among the clergies as the hierarchy worked to preserve the trust of its flock,” Mr. Pangilinan said.

Oscar Valero Cruz was born on Nov. 17, 1934, in Balanga in Bataan Province, a poor area west of Manila, and had three brothers and a sister. He was ordained in 1962.

Melo Acuna, a veteran journalist and friend of Archbishop Cruz’s for more than 30 years, described him as an activist who loved his early morning walks.

Mr. Acuna, who used to work at the Catholic-run Radio Veritas in Manila, recalled a time when the clergyman politely declined to officiate Mass at the residence of a rich landlord who had links to the government.

His refusal, Mr. Acuna said, was because the landlord owned tracts of land that under an agrarian reform law should have been distributed to farmers over a period of time. The priest had regularly visited and brought food to farmers who were holding protests to demand pieces of land they felt they were legally due.

Archbishop Cruz was often at rallies pushing for land reform as well as other issues. The archbishop was dedicated to what he called a “crusade” against gambling and once rejected a local politician’s offer to repair a cathedral damaged by a typhoon, because he believed that the funding would have come from gambling.

He was particularly concerned about the popularity of jueteng, an illegal numbers game that generates millions that have funded many political campaigns in the country. “Jueteng has become a veritable social cancer,” he once wrote on a blog. “It destroys the value of sweat and toil, fomenting indolence and dependence on luck.”

Biden, in First Florida Trip as Nominee, Aims to Shore Up Latino Support

Latin America Is Ready for Its Black Lives Matter Reckoning