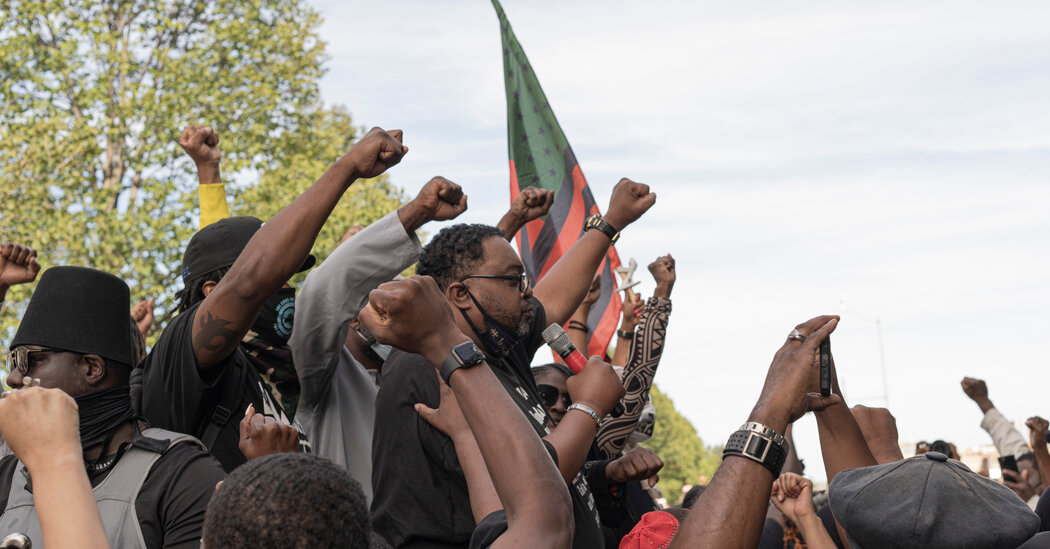 KENOSHA, Wis. — He walked near the front of the march in Kenosha, Wis., on Saturday, a trail of hundreds of demonstrators behind him, raising a black-gloved fist in the air. His white Chicago Bulls shorts flopped past his knees and the gold block letters on his black T-shirt glistened.

“BLAK,” it read, an acronym for Black Lives Activists of Kenosha.

Just a week earlier, Jesse Franklin, who drives a delivery truck, had never been to a protest. He’d never marched in a rally, never chanted for justice, never had a large group of people waiting to hear what he would say.

But that all changed a week ago when he heard gunshots up the street from where he was walking, raced toward the sound and came upon a horrific scene. A man he knew from the neighborhood as a doting father and a big sports fan, Jacob Blake, was bloodied and slumped over after being shot by the police.

“Enough is enough,” he said. “We’ve been seeing it on TV. It’s time for somebody to take a stand and make some changes.”

And so the day after the shooting, on Monday, Mr. Franklin and a handful of friends went out to protest. On Tuesday, they formed the Black Lives Activists group, and by Saturday, they were among the groups that, at the request of Mr. Blake’s family, were running a major rally on the streets of Kenosha, calling for justice for the father of six who is now paralyzed after being shot in the back.

With his swift push into activism, Mr. Franklin, who is in his 30s, joins a growing crop of young people who have come from the sidelines and moved in as new leaders of a movement for racial justice that has grown at warp speed over the past several months in the wake of several highly publicized cases of police violence against Black people.

Saturday’s event brought together some of these new organizers, along with a mix of politicians, longtime activist organizations like the Black Panthers and some of Mr. Blake’s family members, for a daytime rally in front of the Kenosha courthouse.

The same location had been the site of demonstrations earlier in the week that tumbled into property destruction and violence. But on Saturday, Jacob Blake Sr., Mr. Blake’s father, urged for peace and also spoke of the need for decisive change.

“What gave them the right to think that they can attempt murder on my son?” he roared into the microphone, wearing a T-shirt with a picture of his son that read, “I am a human being.”

The police have suggested that the officers who confronted the younger Mr. Blake were responding to a caller’s complaint against him, and that they had an earlier warrant for his arrest on a sexual assault charge.

After speaking from the stage on Saturday, the elder Mr. Blake, in a conversation with reporters, pushed back against that narrative.

“None of those policemen standing out there had any idea what charges my son had in his past, what kind of person he was,” he said.

Letetra Widman, the sister of the younger Mr. Blake, said the shooting of her brother helped to bring new energy to the fight for racial justice.

“I want to send a special thank you to the Kenosha Police Department,” she said, pausing as the crowd buzzed with curiosity, and then adding, “for showing their true colors.”

“And I want to thank you again for recharging my melanin,” she continued. “Giving me all the courage I needed to speak up, to stand up. Not just for Jacob, but for all the people who have not gotten justice.”

Kenosha — population 100,000 — is a quiet community on the shores of Lake Michigan, about 40 minutes south of Milwaukee. Although there have been tensions between the police and Black residents in the past, the eruption after Mr. Blake’s shooting, which was captured on video, has been unlike anything that locals had ever imagined.

Demonstrations gave way to clashes between the police and protesters, which led to tear gas and rubber bullets being deployed. Some people vandalized and burned buildings and cars. White militiamen descended on the town with rifles, and a 17-year-old among them was charged with first-degree intentional homicide after fatally shooting two protesters.

President Trump has used the unrest in Kenosha to emphasize the need for more law and order in cities rattled by protests. Many in Kenosha, though, have rejected the president’s assertion, arguing that their community is already safe. Mr. Trump said on Saturday that he would probably visit Kenosha, which has not had any major unrest since Tuesday night.

Politicians in the city urged protesters on Saturday to channel their energy and anger toward voting in November.

“We need to march on them ballot boxes,” Representative Gwen Moore, a Democratic lawmaker from Wisconsin, told the crowd. “We’re going through the worst things we’ve ever experienced, but keep your eyes on the prize, please.”

Mr. Franklin, with his long hair pulled back into a knot atop his head, spent much of Saturday’s rally flanking the stage with fellow members of BLAK. They escorted speakers up and down the stairs and raised their fists in the air as the crowd chanted: “No justice! No peace!”

Voter-ID cards to go digital from January 25, know how to download it

Here’s what it would take to impeach a president in 12 days.

Voter-ID cards to go digital from January 25, know how to...