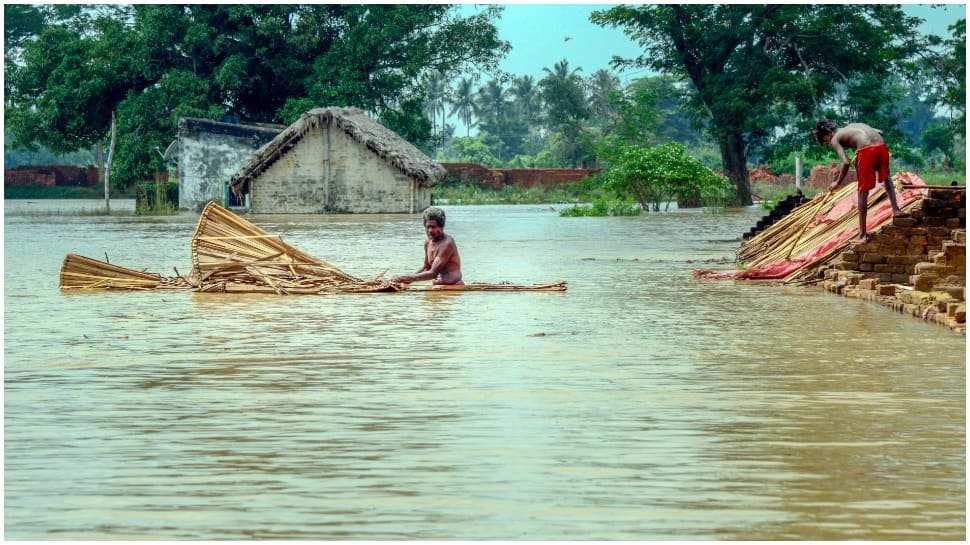 Bhubaneswar: Flood waters of the Mahanadi inundated several villages in coastal Odisha on Sunday with over 10 lakh cusec flowing through the Mundali barrage near Cuttack, officials said.

Noting that an inflow of even 7 lakh cusec at Mundali usually triggers flood in the Daya and the Bhargavi, the two tributaries of the Mahanadi, Special Relief Commissioner (SRC) P K Jena said, the flood waters have submerged many villages in Kanasa and Delang blocks in Puri district causing two breaches in the embankments of the Daya and another in the Rajua in Khurda district.

The repair of the breaches will be taken up immediately after the flood water recedes, he said.

Mahanadi, the biggest river in Odisha, is in spate following heavy downpour in its upper catchment areas in neighbouring Chhattisgarh three days ago and flow of the huge volume of water into the Hirakud reservoir, built across the river near Sambalpur in west Odisha.

Forty-six of the 64 sluice gates of the Hirakud Dam have been opened by the authorities to discharge excess water from the reservoir which was receiving huge inflow from upstream.

“Over 7.65 lakh cusec of water is now being discharged from the Hirakud Dam,” Special Relief Commissioner (SRC) PK Jena told reporters after a high-level meeting.

The water level at Hirakud Dam stood at 628 feet on Sunday noon as against the full reservoir level of 630 feet, the SRC said.

“Excess water is being discharged from the reservoir due to the huge inflow and rise in water level,” he said.

As a result, the volume of the river water flowing through Mundali near Cuttack has touched 10.02 lakh cusec on Sunday, he said.

“Flow of water from Chhattisgarh has now dropped. Inflow into the Hirakud reservoir which had shot up to 9.5 lakh cusec has come down to around 8 lakh cusec,” the SRC said.

Mentioning that the peak inflow through the Mundali barrage is likely to continue till Monday, the SRC said, the floodwaters are expected to reach Kendrapara, Puri and Jagatsinghpur districts later in the day.

The flood in the Mahanadi river system is likely to affect coastal districts including Puri, Khurda, Cuttack, Jagatsinghpur, Nayagarh and parts of Kendrapara, Chief Engineer of Water Resources department, Jyotirmanya Rath said.
Meanwhile, the water level of the Mahanadi stood at 26.86 metre at Naraj near Cuttack as against the danger mark of 26.41 metre on Saturday evening.

The state government has deployed 15 units of National Disaster Response Force (NDRF), 14 teams of Odisha Disaster Rapid Action Force (ODRAF) and 119 teams of Fire Service in the low-lying areas for carrying out rescue and relief operations, the SRC said.

Evacuation will be undertaken in vulnerable areas to shift people to shelter centres where cooked food will be provided.

Collectors of all the districts in the Mahanadi delta region have been alerted to remain prepared to deal with the situation, the SRC said.

In Jagatsinghpur district, the water level of two tributaries of the Mahanadi has crossed the danger mark.

The water level of the Paika river was also rising, officials said.

However, the flood situation created by the Subarnarekha, Budhabalanga, Baitarani and the Brahmani in 12 of the states 30 districts showed signs of improvement with water level gradually receding in many places, the SRC said.

The four rivers had breached at least 32 locations, he said.

The recent rain and flood in the state claimed at least 17 lives, besides affecting over 14.32 lakh people in 3,256 villages and 21 urban areas of 20 districts, the SRC said.

As per the preliminary assessment, as many as 10,382 houses have been damaged and 1,68,904 crop area affected due to the flood which left over 2.65 lakh people marooned in 340 villages.

Alexander Vindman Talks With Kara Swisher About Trump and Speaking Out

In Proud Corners of Afghanistan, New Calls for Autonomy